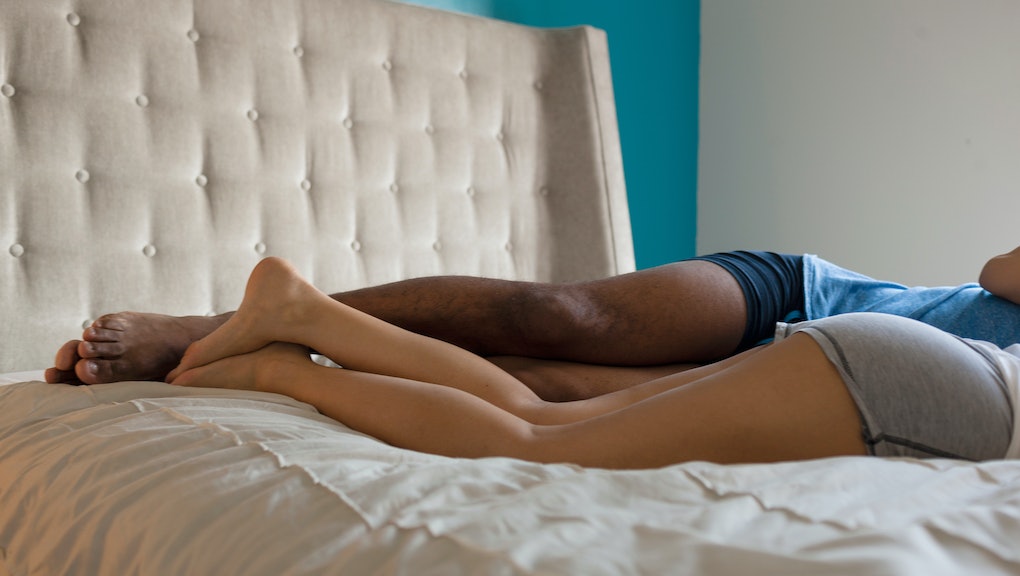 This Is Why Dudes Love Morning Sex, Survey Confirms

There are a few perks to being an early morning riser: the first glimpse of the sun, a longer shower, spare time to perfect your breakfast burrito. If you're a guy, you can add morning sex to that list.

The survey: According to a survey of 2,300 adults conducted by sex toy retailer Lovehoney, the sweet spot between 6 a.m. and 9 a.m. is when men are most up for sex. In fact, the survey averaged that men reach their "peak horniness" around 7:54 a.m., reported the Telegraph.

Women, the survey found, tend to be more nocturnally inclined. Their average peak horniness hits at 11:21 p.m. — right before The Tonight Show — while 11% reported that they felt most passionate in the morning. While it seems that men and women reside in different biological time zones, there may be a number of benefits to rising early to get it on (besides riding out that post-coital glow).

Why men are so down in the A.M.: The survey indicates that the conventional wisdom is true, but what's the actual reasoning? It certainly has biological roots, as evidenced by that erection staring many men down in the morning.

Morning wood can be attributed to our bodies shutting off neurotransmitters, namely norepinephrine, which regulates erections during REM sleep, according to ASAP Science. Without that regulator, your body sends a whole lot of blood to the penis, and voila: erections.

Not only that, but men's hormonal shifts overnight contribute to those feelings of peak horniness. "That's when testosterone levels peak, and testosterone is a leading contributor to sexual feelings in men," Harry Fisch, author of Size Matters, told Cosmopolitan. Pair a huge erection with increased testosterone, and it's no wonder that morning sex is the ideal for men.

A reason to wake up: While the survey and past research has indicated that the happiest couples are those who flexibly coordinate their sexual schedules, there might be an advantage to trying morning sex out for a change, for couples of all orientations.

Not only does sex reduce stress and block anxiety responses in the brain, it can boost the immune system. Meanwhile, orgasms have been proven to increase brain activity, making sex an ideal, energy-boosting activity to start out your day.

Not to mention, morning sex may address that "I'm way too tired," instinct many couples feel before hitting the sack at night. The struggle between a night owl and morning riser is all too real.

"The biggest problem for couples is just that they're so darn tired at the end of the night," relationship expert Wendy Walsh told Bustle. "So catch it while the day is bright and you're rested. You don't have to get dressed up. There's no pressure to look good, perform — you just wake up."

Couple the benefits of morning sex with a cup of coffee, and you're looking at an entirely new morning attitude.