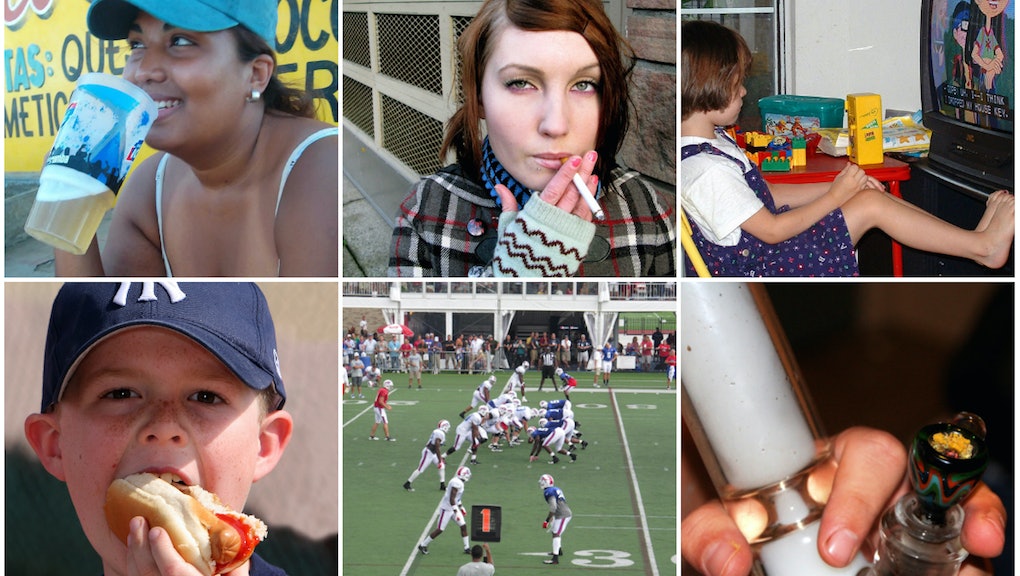 Can You Spot the Most Dangerous Activity on This List?

Pop quiz: Which of these activities is the most dangerous?

Judging from the overwhelming extent to which marijuana is regulated by our government — we arrest more than 700,000 people for marijuana possession and spend $3.6 billion enforcing those laws every year — you'd probably think it's the most dangerous activity on the list, right?

Millions of Americans sit for hours on end at their work desks. Unfortunately, that amount of sitting — three or more hours each day — can reduces life expectancy by two years. Even worse, it's bad for our brain. Still, sitting is perfectly legal and widely practiced. Just imagine if the government outlawed your couch.

3. Walking down the street:

Every year, more than 4,000 pedestrians are killed by vehicles. Of course, save for crosswalks and stop lights, walking in a city is perfectly legal and otherwise unregulated by the government.

Alcohol is probably the most widely abused substance in America. It's also among the most studied, and the National Council on Alcoholism and Drug Dependence has the statistics to show for it: One in 12 people struggle with alcohol abuse or dependence. Up to 40% of all hospital beds in the U.S. are being used to care for people with alcohol-related issues. Alcohol abuse causes 88,000 deaths a year. But even though alcohol is lightly regulated — you have to be 21, technically, to procure it — it's perfectly legal.

Over 400,000 Americans die every year from tobacco or secondhand smoke. It costs the country between $289 and $333 billion, between medical costs and lowered productivity. Yet it's only mildly regulated by the government.

Watch TV for a couple hours a day? That's 1.4 years off your life expectancy. Binge-watching increases the risk of diabetes. But no one in government is talking about legally imposed limits to our TV time.

Hot dogs are an American tradition. They also kill a handful of kids each year due to asphyxiation and send 10,000 to the hospital for the same reason. Many hot dogs are made with a variety of chemicals and preservatives and a lot of fat, which can contribute to obesity and poor health. But can you imagine a world in which you weren't allowed to buy some Ball Park Franks from the grocery store?

America loves football. Tens of thousands of high schoolers play it, rallied on by their communities. Unfortunately, these teens are at significant risk of permanent brain damage from the sport. Professional players have spoken frankly about its effects on their health; many suffer mightily from depression or lack of focus, not to mention physical symptoms, even in retirement. But despite the risk, it's lightly regulated and certainly not against the law.

That brings us to marijuana. The reefer. Mary Jane. Using it results in short-term impairment (you're unlikely to remember the plot of that last Game of Thrones episode perfectly) but the long-term effects are debatable. A number of studies have shown the drug has limited effects on adults, and the negative impact on society appears minimal. Yet, compared to the other activities on this list, it's not just regulated, but completely illegal in 48 states. In many parts of the country, even simple possession results in jail time and a criminal record.

It's time for our elected representatives to wake up. Marijuana is less dangerous than so many other activities — ones we trust Americans to make their own decisions about, like alcohol (which is arguably the most dangerous). Yet millions of Americans who smoke marijuana are still being treated like criminals, based only on hypocritical policies that are divorced from the evidence. That's exactly why Congress should follow the lead of places like Colorado and Washington and legalize weed.

Because when marijuana is one of the safer things on a list of common activities, but is the only one that's illegal, something is very, very wrong.