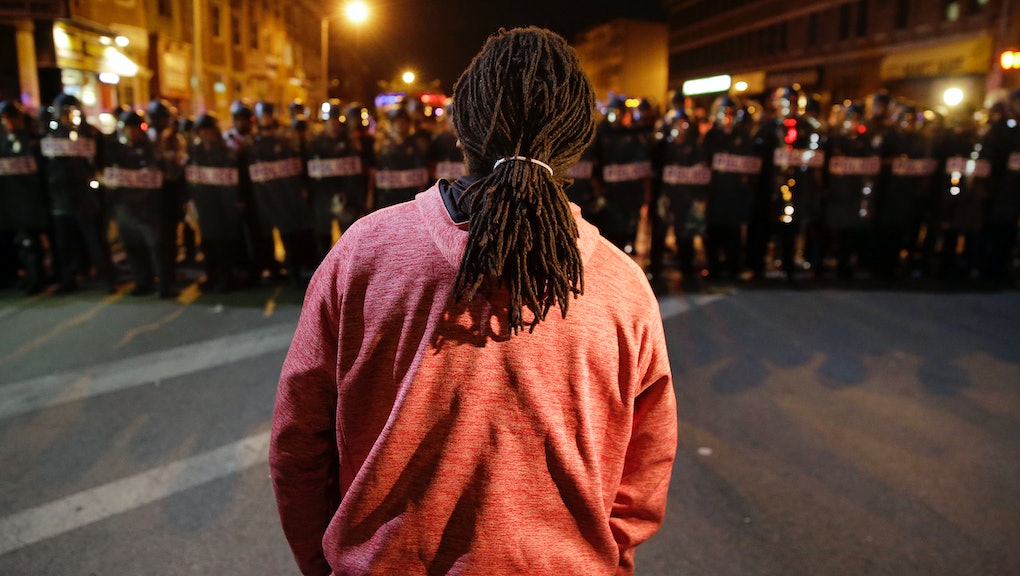 When the Charm Wears Off: Urban Decay, Black Rage and Baltimore Aflame

Charm City, as it's called, never quite made its way home with me. Sure, I was taught the history of the "Star Spangled Banner" and Edgar Allan Poe and all the other ornamental facts about Baltimore in that third-grade social studies unit. But these remote testaments to white exceptionalism never aligned with what I saw every day gasping for air around me as a black boy growing up in Baltimore.

Now things are going up in flames. Cars, CVS stores. Our limits of spiritual and physical pain are bursting at the seams. No amount of "charm" can save any of us from the debris, nor from the dust gathered by decades of racist police brutalization, hyper-present heroin addiction and availability, black political self-loathing and piss-poor public schooling. Baltimore is hurting, and her people have decided her wound has been pimped for the last time.

I know Baltimore well. My mother was a Baltimore City Public Schools special education teacher for 33 years. I attended what some consider the crown jewel of Baltimore city public education, Baltimore Polytechnic Institute, or "Poly" as it is affectionately known in the city. I was what my grandmother would call a "learn-ed" black kid. Yet these buffers of black respectability did not shield me from the real-time, real-life pain of black life in Baltimore.

My grandmother lived on Belleville Avenue in northwest Baltimore, not far from Mondawmin Mall, the scene of so much media attention during the past several days. Her house was stately. Huge. It sat on a street alongside others similarly maintained by other black folk. These homes were intentional in their presentation. They signaled a commitment to never forgetting what it took to get there. Beautifully manicured lawns, inviting porch chairs and lively mailbox conversations were all features of my earliest memories of my city.

This is where I coupled Baltimore with community and black love. Trees swayed over my grandmother's backyard, which, to my child's mind, seemed boundless. Her clothesline, near a bush I tripped over while playing hide and seek with my brother, always smelled of cinnamon-kissed linen. Our family church was around the corner; Sundays were times for black joy to rise.

Belleville Avenue was where my lesson in Baltimore charm began, but it was also where it ended. By sixth grade I started to view my city differently. Heroin, police brutality and political corruption were no longer features of "adult" conversation but actual actors in the world around me. As years passed, the one Super Pride market on Liberty Road turned into none, the manicured lawns into receptacles for cigarette butts and liquor bottles, children laughing on the way to one of the many recreation centers into children wondering if it was safe enough to travel to one of the few left scattered across town. Decay was everywhere. Charm was a luxury black survival in Baltimore could no longer afford.

"Belleville Avenue was where my lesson in Baltimore charm began, but it was also where it ended."

The suspenseful, dramatic Baltimore that registered in the neoliberal imagination through The Wire was contouring actual black life well before HBO capitalized on Charm City in 2002, black life like mine, and like Freddie Gray's.

Gray was my age — 25. He grew up in the impoverished Sandtown area of West Baltimore. His name now serves as another chapter in the canon of state-sponsored execution of black life. Gray's name streams past in tweets and Instagram posts, as is the expectation in today's mode of digital activism. But my fear is in all of these ephemera, his name is being detached from the system that led to his death while in the custody of Baltimore police.

While we do not yet know the details of what led him to run from police, we do know state power, replete with vestiges of white supremacy from the South's fight against federally mandated desegregation, often follows a procedure of black economic, political and social suppression. Baltimore in particular has been suffocating under the pressure of a drug epidemic that began in the 1950s and has never ended, and a police presence that refuses to stop punishing a symptom as if it were a disease. Gray's severed spine is, for this nation, a watershed moment of understanding into a longstanding practice of mis-policing communities of color.

As was the case in many American urban cities during the drug boom in the '80s and early '90s, the threshold of "probable cause" required to arrest an individual was adjusted to assuage the anxieties of those political leaders fearing a loss of moral and economic control. A sort of satisfactory suspicion drove policing and turned black communities into breeding grounds for police harassment and violence, which may have something to do with why black men now account for 50% of state and local prisoners incarcerated for drug crimes across the country.

Of course, there is no single lever that will provide clarity to this moment in Baltimore. The truth is that whatever drove Gray to run from police that day and land in custody cannot be unearthed by this piece, nor some magical appearance of physical evidence in an investigation. But we must remember the legacy of racism runs deep. It's in the rumbles of black children's stomachs as they walk to school hungry on North Avenue, in the trail of heroin needles that trace the sidewalks outside Harlem Park and in the 37% unemployment rate for young black men in Baltimore.

Just as my grandmother's street transformed for me from a badge of black pride into a signpost of black frustration, Baltimore is in a process of refiguring itself. But unlike Belleville Avenue, the Baltimore occupying this cultural moment is refusing to be pimped and hustled in a new way by an old system of white supremacy. And if some things have to burn to prevent that from happening, the general consensus is to get comfortable with the heat.