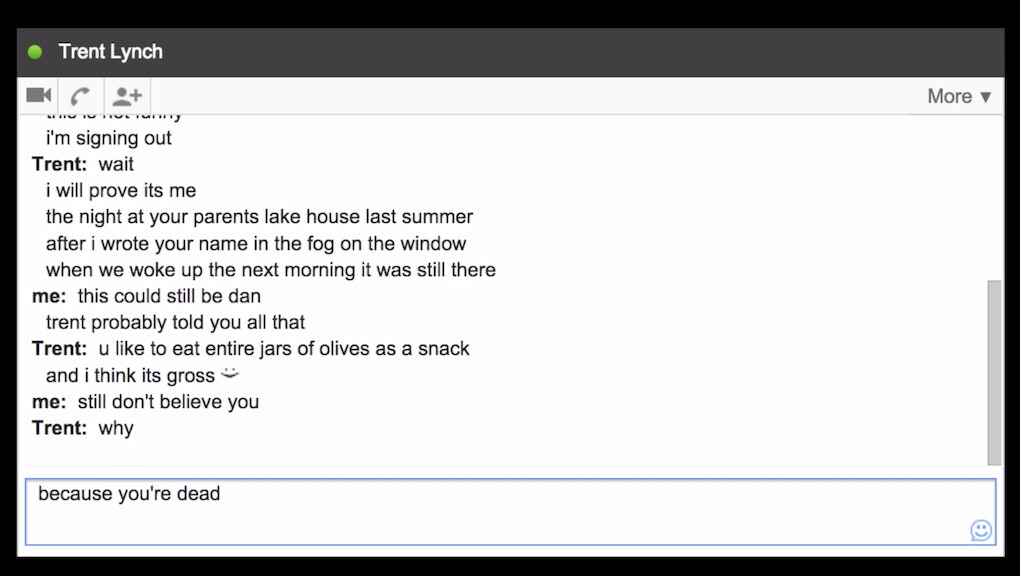 When you're Gchatting with somebody — friends, family, coworkers, significant others — the basic assumption is that they are who they say they are. But what happens when that presumed reality is abruptly shattered?

That's the premise behind "Green Dot," a new short film by writer and filmmaker Alex J. Mann. There's no face-to-face acting involved; the five-minute spot is conveyed entirely through a Gchat conversation between two acquaintances, Mallory and Trent.

The dialogue starts off normally enough, but it soon becomes clear that something is off. Mallory refuses to believe it's actually Trent on the other end — "Mrs. Lynch, are you on Trent's account?" she asks — but he's adamant it's him. We won't spoil the surprises, but suffice to say the conversation quickly derails into creepy-as-hell territory.

Mann told Mic in an email that the idea came from a real-life experience.

"I was on someone's Facebook page who died recently, and the sister was posting for them," he explained. "There was something surreal about seeing posts from someone who I knew was dead, even though I knew the sister was writing them. I combined that idea with Gchat, since Gchat is this time portal into our past — I'm always seeing names in my Gchat window of people I haven't spoken to in years, and probably won't ever speak to again."

The most convincing thing about the entire production: its authenticity. The pauses in conversation, the different response times for different questions and the clear familiarity the two share all work together seamlessly to create an entirely believable scenario.

This, as it turns out, wasn't entirely premeditated. "Some of the misspellings and rephrasings were intentional, others were honest typos," Mann told Mic. "The details came from writing and rewriting the script until it felt as real and authentic as possible."

To make the conversation happen on a practical level, Mann and his coproducer, Adam Bloom, each took on one of the personas. Bloom typed as Trent and Mann typed as Mallory. Because they couldn't utilize real actors for the roles, Mann and Bloom worked hard to create convincing personas.

"I wanted to establish a voice for both characters," Mann said. "I set some rules. For example, Trent never uses the word 'you,' only 'u.' Mallory is younger, more earnest and more formal with her speech."

As Mallory begins to lose her nerve, she starts to stumble over the conversation, something anyone who's ever had an uncomfortable Gchat interaction can attest to.

Any horror movie worth its salt knows that tapping into our deepest and most basic fears — darkness, being alone, our capability for evil — is the key to making audiences squirm. "Green Dot" is so compelling because it also uses this trick, only this time the fear is a uniquely modern one.

We're still trying to figure out exactly what social media is and what it's capable of. "Green Dot" takes the worst-case scenario and exploits it.

"[It's about] fear of the unknown," Mann told Mic. "Every time it says 'Trent is typing,' the audience is expecting some twist or turn. I wrote the script, and the 'Trent is typing' text still stresses me out."

The Catfish fear: Fear of the unknown also applies to the characters themselves. Mann noted that some viewers thought Mallory was being catfished — the phenomenon of deliberately hiding one's real identity online, made famous in the MTV documentary series — which Mann said "would have been the meanest catfish ever."

Next time you open a new chat with your coworker, best friend or partner, pause for a moment and remember "Green Dot."