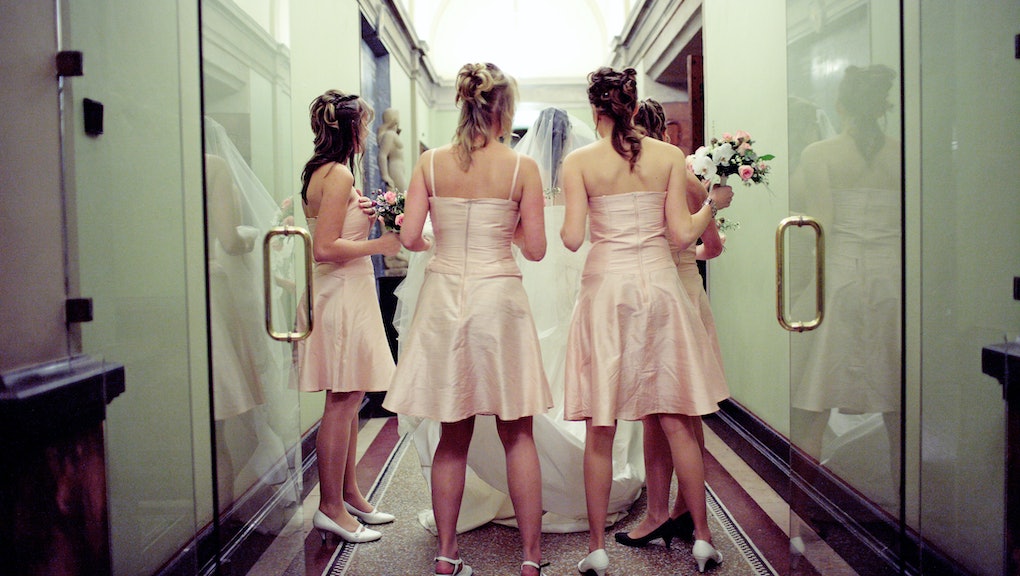 Finally, Someone Speaks the Truth About Bridesmaids

Leave it to a former MTV reality star to speak some real truth. Whitney Port, formerly of The Hills and the grossly overlooked The City, sat for an interview with Cosmopolitan.com this week to chat, among other things, about her upcoming wedding.

When she was asked "Are you planning on designing your bridesmaids' dresses?" she made this crucial admission:

"I'm actually not even having any bridesmaids. I feel like all my friends and sisters know their place in my life, and I don't need to designate labels on them or control their dresses or anything like that."

To which we imagine many women are probably cheering: Yaaaaaasss.

Or, to put it more eloquently: Finally, a bride is getting honest about one of the most stressful, unnecessary elements of a wedding, and one that's not worth the risk.

Unnecessary stress: Like engagement parties and bridal showers, bridesmaids are an accessory to the wedding process that are technically nonessential, if you see a wedding as the public taking of vows with maybe a party thrown in. But weddings, as we well know, are far more elaborate productions than that. As Rebecca Mead, author of One Perfect Day: The Selling of the American Wedding, told Salon, "Now the Association of Bridal Consultants says that 43 professionals are needed for the servicing of the average American wedding."

Bridesmaids are a part of that production, serving as both the costars and the backstage handlers. Being chosen as a bridesmaid is an enviable honor indicating one's place among the bride's friend ranks, yet an honor that's rewarded with a litany of responsibilities, including everything from planning the shower and bachelorette party to soothing the bride's ego.

Carrying out these responsibilities is only more nightmarish if the bride, as Port referenced, is of the controlling "bridezilla" variety.

Not worth risking a friendship: The tension of catering to a bride while jockeying for social position among a team of 'maids can put real pressure on friendships and can end up being a headache — for both the friends and the bride. As one bride wrote in to PopSugar in 2007, her bridesmaids were "constantly stressing [her] out," to the point where their friendship took a serious hit.

For a role intended to honor a friendship, not ruin it, bridesmaids can wreak more havoc than is warranted. If the idea is to have someone around to help with the small details, brides can hire professionals or (here's a thought) ditch the details entirely. (Do the bags of Jordan almonds really need braided ribbons on each one? Are party favors for the shower necessary? Will anyone notice if the ring bearer doesn't have a vest that matches the groomsmen?)

And if the idea is to honor your friends? As Port pointed out, you don't need matching dresses or labels to do that. Just making room on the dance floor and providing an open bar is probably enough.