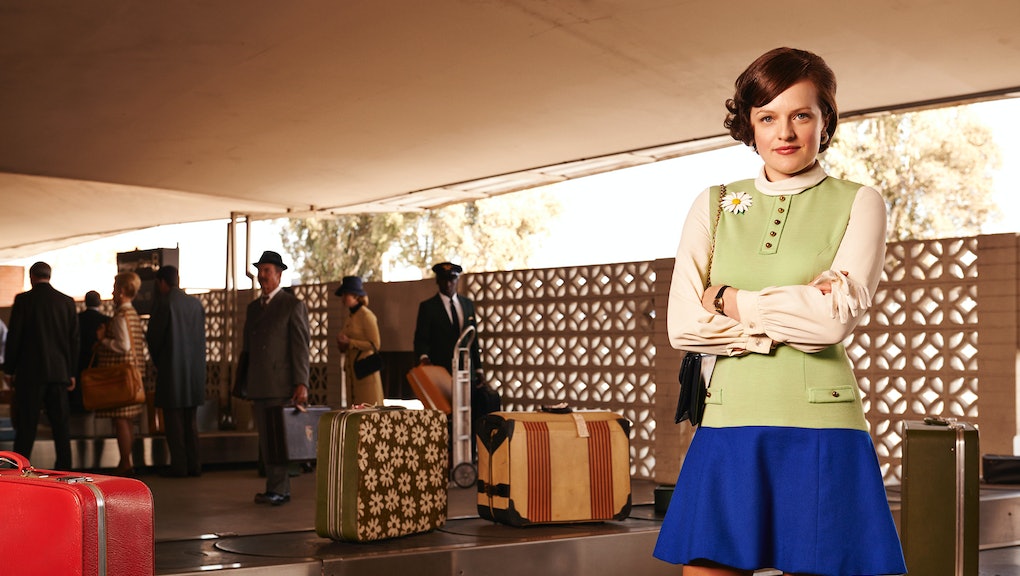 Through seven seasons of Mad Men, we've seen Peggy Olson (played by Elisabeth Moss) bloom from being a nervous and naïve secretary into a strong, powerful copy chief. She's stood up for her rights as a woman to progress in her workplace, balancing her ambition with the changing times of the 1960s. Spoiler alert up and through Sunday night's episode of Mad Men from here on out.

On Sunday night, Peggy took the latest step in her career: joining the advertising giant McCann Erickson. She resisted the move, one that will probably deprive her of some of the power she's gained over the years. When she finally entered, she did so with cigarette in mouth, sunglasses on and giving not a single fuck. Her defiance is perfectly in line with her previous attitude: strong-willed and unafraid of threatening the status quo.

In the eyes of a 2015 viewer, Peggy has said and done things that look ugly. Her shaming of co-worker Joan (Christina Hendricks) for what she wears in a recent episode wasn't the best look. But Peggy's 1960s brand of feminism has to be considered with historical context. She was a pioneer in her field and consistently broke down barriers. She's not perfect, but no one is. Being an imperfect feminist doesn't make her less of one. It makes her human.

The response piques the interest of her higher-ups, and her boss Don Draper (Jon Hamm) gives her a shot at writing some copy. Thanks to her ability to see women as more than one of many, she gets the chance of a lifetime. Luckily, she runs with it all the way to the top.

She treats men as her equal.

It takes Peggy a while to grow such a backbone, though. Even after she's promoted to copywriter, she still refers to Don as "Mr. Draper" well into 1962. It takes a word of advice from Don's then-lover Bobbie Barrett (Melinda McGraw) to get her to wake up. "You're never gonna get that corner office until you start treating Don as an equal," Bobbie tells her. Shortly after, after Don shames her in a meeting, she levels the playing field: "Thank you, Don." Simple, effective and progressive.

She loves and respects LGBTQ people.

She knows how to close a deal.

Yet years before, she gets her first taste of that. A remarkable pitch for Popsicle that evokes family, religion and love is the first time the audience saw Peggy hit a home run. "Take it. Break it. Share it. Love it," she intones. It's beautiful, and emblematic of her best work.

She stays in control of her relationships.

In 1960, Pete unknowingly impregnates Peggy with his child. In 1962, on a couch in his office, she tells him what she'd done — giving the child up for adoption and moving on with her life — and why she hadn't told him. "I wanted other things," she says, signaling her career is more important to her than raising kids. "One day you're there, and then, all of a sudden, there's less of you."

In 1970, Peggy and Pete sit on a couch in his office and have a serious conversation. Yet the history Peggy chooses to take the reins of a decade before is what makes it all the more extraordinary.

She can let loose, but she gets shit done.

You don't get to Peggy's position by being a slouch. You get there by playing hard, but working even harder, and often simultaneously.

She isn't afraid to ask for what she wants.

Unfortunately, that comes back to bite him in the ass three seasons later. When Roger comes to Peggy to ask for secret help with an account she wasn't allowed on, the heroine knows she has the upper hand on him. "You want me to work up an entire corporate image campaign for $10?" she asks. "You're being very demanding for someone who has no other choice. Dazzle me."

After a tough negotiation, Peggy comes out $400 richer — a dazzling result indeed.

She knows when to walk away.

But Peggy is responsible for Peggy. She benefits from the stepping stones men give her, but she arranges the steps into a coherent path. In a decade when all odds were against her, Peggy not only survives, but thrives. She does everything to push herself forward. That's what makes her one of TV's great feminists: She makes herself.