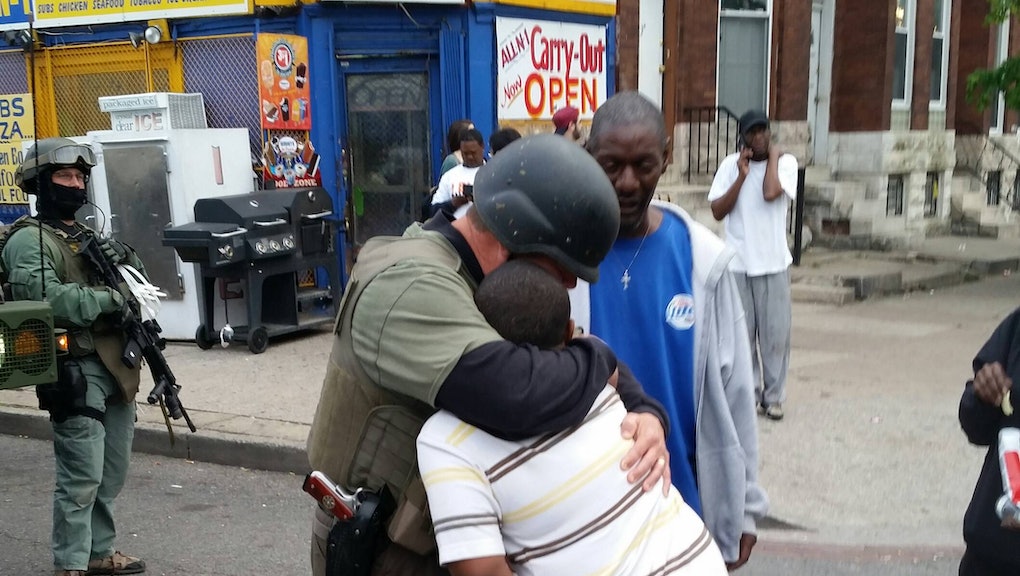 Viral Photo Reveals a Side of Baltimore the Media Isn't Showing

Photos of looted stores and burned-out pharmacies have been all that many Americans have seen of Baltimore in the past week, as widespread resentment over harsh police tactics exploded into open defiance of the law following the death of 25-year-old black man Freddie Gray on April 19.

But a week after the initial riots, things are quieter in Baltimore. This touching image of a black kid hugging a white police officer decked out in riot armor has been circulating the Internet after it was uploaded to Reddit on Friday, tagged with the appealing caption, "Baltimore father wanted his son to know that not all cops are out to hurt them."

Particularly cynical viewers will note that the hashtag #NotAllCops has been widely used on social media to mock the notion that individual acts of kindness or the existence of fair-minded officers negate the systemic lack of accountability in many American police departments. Indeed, as the kid hugs the officer, another policeman equipped with heavy body armor, a ski mask and a large assault rifle looks on.

Some users on Twitter with little sympathy for the police made their opinions on the photo pretty clear, calling it pro-police propaganda:

It's still a great photo, and it stands in stark contrast to the visuals Americans have become all too accustomed to seeing in the wake of civil unrest over police violence in the past few years. But it doesn't change the fact that Baltimore's police department is no role model for others, plagued as it is with what a recent Baltimore Sun investigation called a "disturbing pattern" of police brutality.

Nonetheless, the photo hits the web at a time when police-community tensions in Baltimore have begun to ease after weeks of mutual strain. Since a week-long curfew was instated on April 27 following several days of rioting and property destruction throughout Baltimore, demonstrations over Gray's death have been peaceful. On Friday, the city's chief prosecutor, Marilyn J. Mosby, announced that she would be pressing charges against six officers involved in Gray's arrest, a move that the New York Times reported resulted in "spontaneous celebrations" throughout the city's streets. Mosby criticized every stage of Gray's detainment, saying he was originally targeted by police without probable cause and that the officers involved showed reckless disregard for his safety.

"The larger message, if there is one, is that we're moving on these things," University of Pittsburgh law professor and policing expert David A. Harris told the Times. "We're taking them seriously, and there's no longer going to be any kind of slowing down and taking it to the point where people wonder, 'Whatever happened to that?'"

While it seems unlikely that the citizens of Baltimore have suddenly been overcome with a change of heart towards local law enforcement, hopefully the ongoing investigation into Gray's death will help set a new tone for the city's approach to policing and the needs of its minority residents. More hugging, less beating, please.