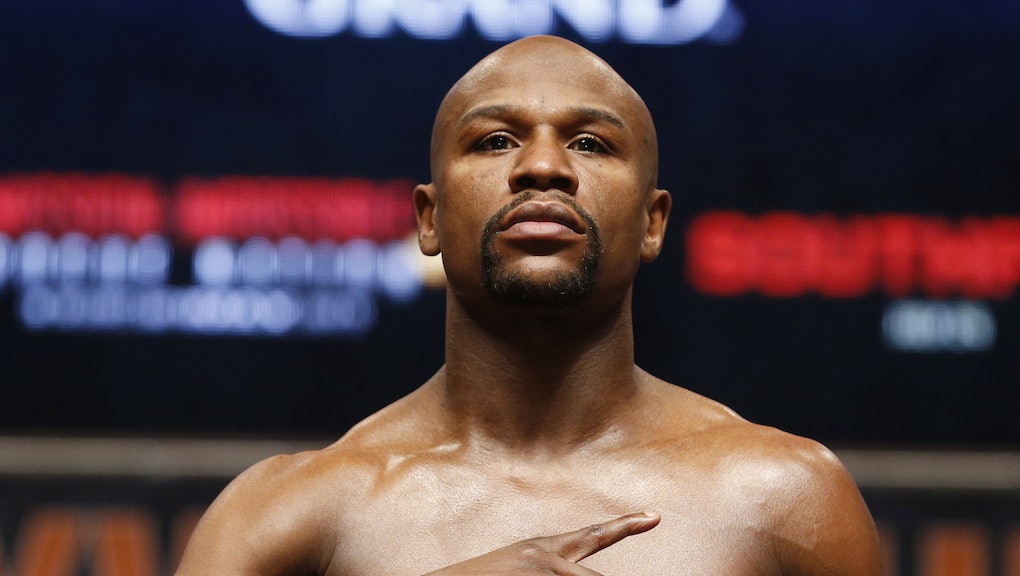 On Saturday night, five-division world champion and undefeated boxer Floyd Mayweather Jr. will defend his titles against Filipino fighter Manny Pacquiao at MGM's Grand Garden Arena in Las Vegas in a fight Time reports may make up to $400 million in just 12 rounds.

They're billing it as the "Fight of the Century." But Mayweather has a dark history picking fights with people who have nowhere near the same ability to defend themselves as Pacquiao. As the New Republic senior editor Jamil Smith points out, Mayweather is a domestic abuser.

As Deadspin's Daniel Roberts documented last year, Mayweather's record of misogynist abuse spans over 12 years and includes seven assaults on five separate women that resulted in either an arrest or citation, and several other incidents in which law enforcement was called in to deal with alleged threats of violence from the champion fighter. Some of the alleged attacks were shockingly brutal. CNN reports that in 2001, Mayweather was accused of hitting the mother of one of his children in the face with a car door and then repeatedly punching her in the face.

Later incidents included an attack on two women outside a Las Vegas nightclub in 2003 and another assault in 2010, that time on a woman with whom he had three children, Josie Harris. While assaulting Harris, he threatened to beat their children if they called 911 or fled.

After the 2010 incident, Mayweather's 10-year-old son Koraun penned this glum statement for police describing the attack:

In a 2014 interview with USA Today, Harris described herself as a "battered woman" and added "for some reason I still get anxiety when I know that he is on his way" to pick up their children. "I have no idea why, but I get really overwhelmed when I know that I have to be around him," she added, noting that he had physically abused her on at least six occasions.

Koraun told USA Today the most difficult part of their relationship was the elder Mayweather's inability to accept responsibility for his own actions, adding that "He is a coward."

The harshest punishment Mayweather received for any of these crimes was a three-month misdemeanor sentence in 2012, which he only served two months of thanks to good behavior behind bars.

For his part, Mayweather told CNN's Rachel Nichols in 2014 "everything has been allegations. Nothing has been proven," added that there were "no pictures. Just hearsay and allegations." He even sought the last refuge of the coward, claiming that "only God can judge me."

That's not even touching some of the other atrocious stuff Mayweather has done, like referring to Pacquiao as a "little yellow chump" and saying "once I stomp the midget, I'll make that motherfucker make me a sushi roll and cook me some rice" in a racially-charged 2010 Ustream, and posting victim-blaming rants to Instagram.

According to Deadspin, Mayweather has successfully sought to hide much of the evidence of the allegations with the assistance of Las Vegas authorities. Today, hours before the fight, CNN reporter Rachel Nichols claimed Mayweather's camp had gotten her press credentials to witness the match revoked, likely in retaliation for the embarrassing interview. For the $100 cost of streaming the match, viewers are getting both the fight and the privilege of ignoring the fact that the reigning champ punches women, too. This is how high-profile abusers escape punishment. Mayweather has faced no real consequences for what he's done.