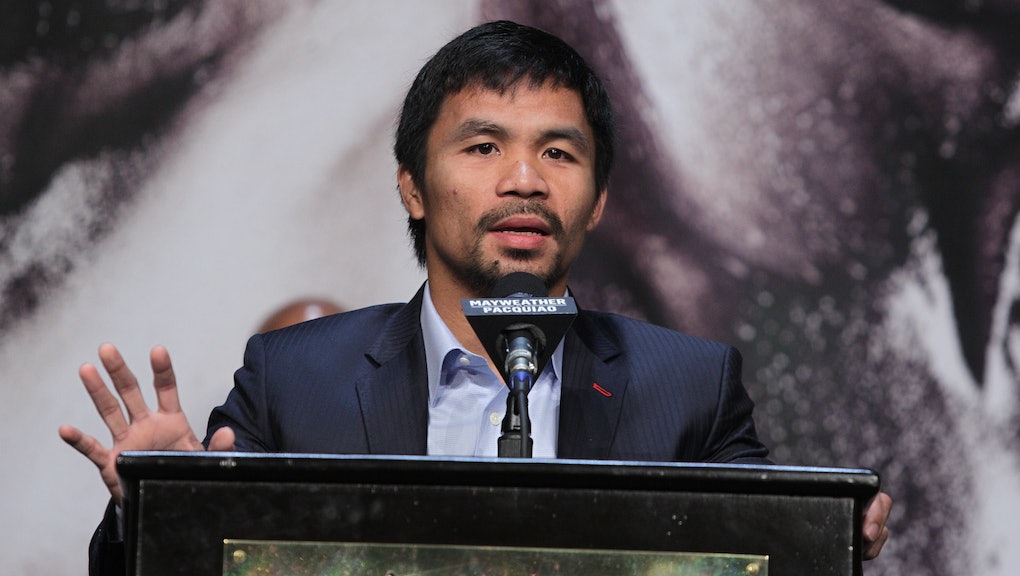 Everyone Is Talking About Mayweather, But Pacquiao Is a Bible-Thumping Reactionary

As the world gathers to watch the Fight of the Century tonight, the elephant in the room is that defending champion Floyd Mayweather Jr. has a well-documented history of domestic abuse. But while Mayweather's opponent Manny Pacquiao may not beat women, he does happen to be a Bible-thumping politician who thinks gay marriage will usher in a modern-day "Sodom and Gomorrah" and opposes affordable contraceptives for poor women with little access to modern health care.

In 2012, Pacquiao told the National Conservative Examiner that he was opposed to gay marriage because "God only expects man and woman to be together and to be legally married. It should not be of the same sex, so as to adulterate the altar of matrimony, like in the days of Sodom and Gomorrah." The interview generated additional controversy after American media mistakenly reported that Pacquiao had personally quoted Leviticus 20:13, a Bible verse that calls for gays to be "put to death," verbatim.

Pacquiao later clarified to the Los Angeles Times that "I am against gay marriage, but I'm not condemning gays," saying that he did not support the death penalty for homosexuals. So while his views aren't as bigoted as was once reported, the boxer is not exactly a paragon of tolerance.

Why do his views on social issues matter? American fans may not be aware that Pacquiao is actually a popular politician in the Philippines, where he has opposed government-funded birth control mostly using quotes from scripture. In fact, his stance approaches something resembling the evangelical Christian Quiverfull movement, which views birth control as immoral and treats each and every pregnancy as a blessing from God. He told GMA Network in 2011, during a debate on a national reproductive health bill, that "God said, 'Go out and multiply.' He did not say, just have two or three kids." The boxer is also on the record as saying that condoms and abortion are sinful.

It's noteworthy here to mention that Pacquiao's opposition to all these supposedly immoral things stands in stark contrast to his own past. In 2011, he reconciled a marriage on the rocks from constant philandering and gambling by becoming an evangelical Christian. USA Today reported that he'd even owned a "a casino in Manila and a large cockfighting operation ."

According to the Los Angeles Times, religious conservatives in the Philippines have made restricting access to contraception and boosting the birth rate a priority despite the nation's problems with overcrowding, poverty and lack of resources. The (very popular) bill Pacquiao opposed eventually passed in 2012; the New York Times reported that it was anticipated to help reduce the nation's high number of pregnancy-related deaths, which stood at around 11 women per day.

It's not an exaggeration to say that as a politician, Pacquiao supported pushing the Bible over the health and well-being of his constituents. Slate's Joshua Keating went so far as to write that while the congressman notoriously only shows up to do his job as a legislator a handful of days per year, that might actually be a good thing, since his apparent disinterest in lawmaking actually kept him from being a more effective opponent of social progression.

So while Mayweather's past makes it nearly impossible to support him, the other man in the ring has a pretty iffy track record as well. Kind of makes it hard to take sides in this match, doesn't it?