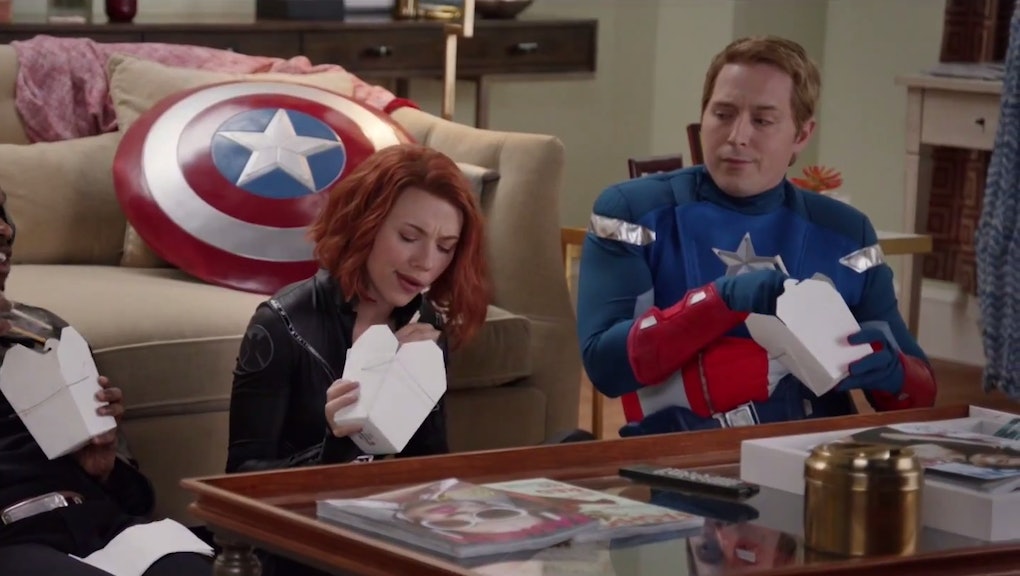 Tired of the repetitive chauvinism that keeps popping up in comic book movies? Saturday Night Live just satirized misogyny in the Marvel movie universe with a spot-on trailer for Avengers: Age of Ultron's fictional gendered counterpart, Black Widow: Age of Me.

While this version of Black Widow (played by the real Scarlett Johansson) might have super skills, a lavish New York apartment and a high-powered job in fashion journalism, there's one thing that she can't tame: the perfect man.

Many Marvel fans have been concerned about the movie universe's fratty atmosphere, particularly after a recent video of Chris Evans and Jeremy Renner (who play Captain America and Hawkeye respectively) gave an offensive promotional interview in which the two giggled over how Johansson's character was a "slut" and a "complete whore." The lack of a Black Widow movie has remained a sore spot among some members of the fanbase.

So it's great to see SNL strike back by mocking this atmosphere of dude-bro sexism with a variety of tired cliches from romantic comedies — like portraying Thor (played by Taran Killam) — as her sassy, advice-giving gay friend:

Finally, the Hulk shows up as her well-meaning platonic friend (who presumably has a secret crush on her)... again with the comfort food.

How's that shoe feel now that it's on the other foot?

But the best part of the sketch is undoubtedly the fact that Johansson herself is in it, implicitly tearing the movies' producers a new one for treating her and the Black Widow character with less respect than they deserve. Excellent.

Watch the whole sketch below: