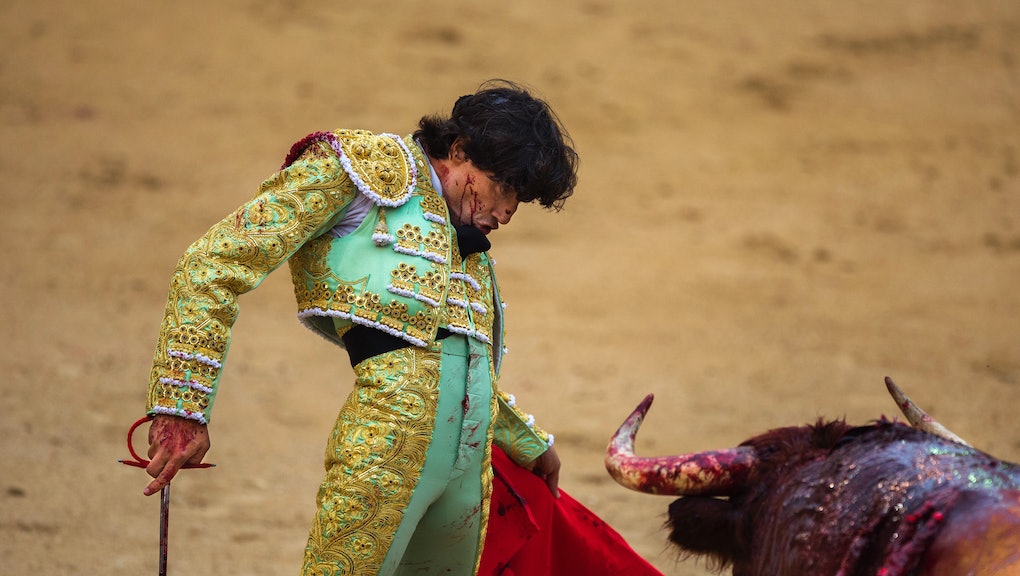 In One Tweet, Ricky Gervais Shows the Next Thing Humanity Needs to Get Rid Of

After an extended campaign on Twitter against hunting and poaching in Africa, the comedian has now turned his sights to a less-often discussed, but equally horrific, practice: bullfighting.

The image is a brutal reminder of the true costs of the sport, which are often obscured by its portrayal in popular imagination. For those who grew up with cartoon portrayals of bullfighting, the Gervais post might come as a shock.

The real sport, however, is a nasty business.

Most popular in Spain where it originated more than 1,000 years ago, a typical fight requires the bull be subjected to various forms of torture before the main event. This can include having petroleum jelly rubbed into its eyes, newspaper stuffed into its ears and a needle stuck into its genitals.

The animal rights group PETA further reports that far from being a fearsome, charging beast, the bull is immediately stabbed with spears when entering the arena, causing significant blood loss. Next, several banderilleros enter the ring on foot and further impale the bull with multiple brightly colored rods called banderillas.

Eventually, the bullfighter or matador (who has not been stabbed or tortured by anyone) kills the bull in triumphant fashion after a few desperate charges by the dying animal. All told, around 250,000 bulls are killed purely for sport every year.

At the risk of disappointing Pink Panther fans, the actual event typically looks quite a bit more like this.

Although in some cases, despite all the advantages given to the matador, bulls do go down fighting.

Killing a bull specifically for its meat can at least provide essential nutrition to people. Spanish bullfighting, however, is nothing more than the slaughter of a normally peaceful animal for the sole purpose of entertainment. In 2010, the Spanish region of Catalonia banned bullfighting for good. The rest of the country is long overdue to follow suit.