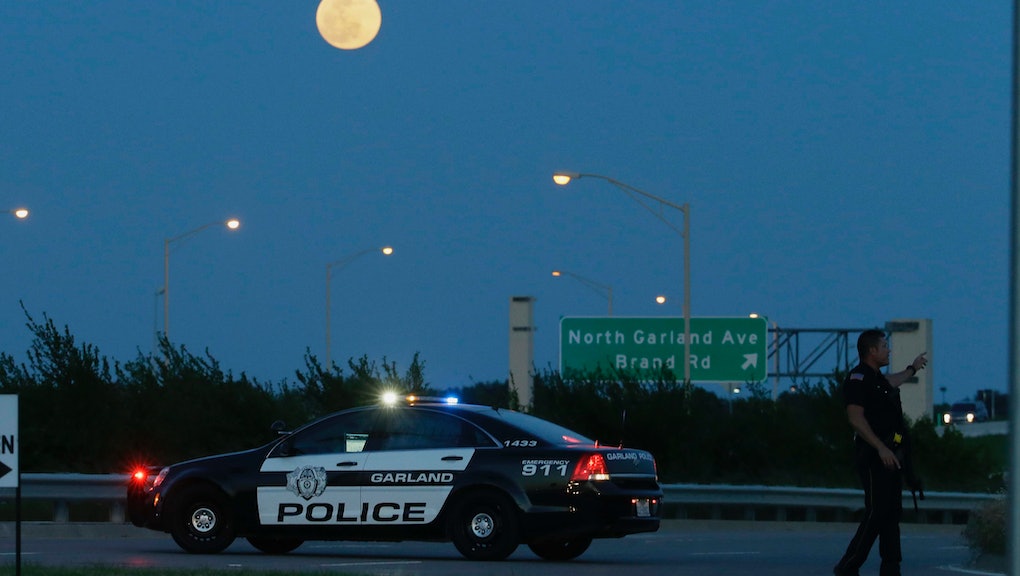 Two men were shot and killed in Garland, Texas, Sunday evening after they opened fire outside the "Muhammad Art Exhibit and Cartoon Contest" at the Curtis Culwell Center. The event, organized by the American Freedom Defense Initiative (also referred to as Stop Islamization of America), showcased approximately 350 drawings of the Prophet Muhammad, a practice considered highly blasphemous in Islam.

But before the identities of the shooters were released and while it was undetermined if the shooting was related to the event, people were already using social media to condemn Islam and share disdain for its followers. The tweets ranged from blanket attacks on Muslims to instigating further blasphemy with additional images including one depicting a pig having intercourse with a Muslim man saying "praise Allah."

Monday morning, the FBI identified of one of the shooters as Elton Simpson, an Arizona resident who was investigated for terrorism five years ago. Though he was convicted of lying about his intentions to travel to Africa, he was ultimately acquitted of terrorism charges. However, that didn't stop the vitriolic tweets from flooding social media Sunday night and Monday morning.

According to the Dallas Morning News, the American Freedom Defense Initiative spent an additional $10,000 on extra security for what was already assumed in the lead-up planning to be a controversial event.

The AFDI is known for its aggressive anti-Muslim position — the Southern Poverty Law Center, which tracks such organizations, has classified AFDI as a "hate group." Shortly after the shooting, group leader Pamela Geller wrote on her website, "This is a war. This is war on free speech. What are we going to do? Are we going to surrender to these monsters? ... The war is here."

Though the reactions of Geller and some Twitter users may represent a small fraction of the American public, they signal an alarming anti-Islamic trend that's unfortunately growing in the U.S. The bigotry towards Muslims for their alleged aggression becomes a self-fulfilling prophecy when Muslims across the globe respond defensively, angered at their exclusion. The AFDI event was ostensibly organized in defense of free speech, but what it produced was a torrent of anti-Islamic vitriol that revealed a particularly ugly side of America.