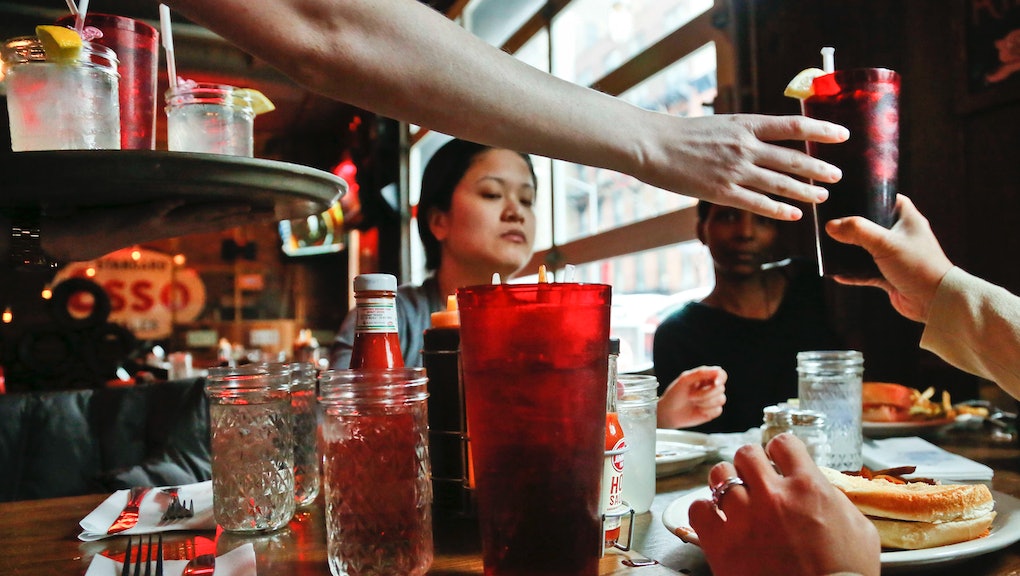 Chloe Hough decided to leave work with a bang.

Her last day as a waitress at the Topeka, Kansas, restaurant Boss Hawg's became a lot more interesting when the state's governor, Sam Brownback, stopped by on Saturday. As the meal was wrapping up, Hough decided to share a little more than the dessert menu with him.

According to KSNT, Hough wanted to say something to the governor, but not she wasn't sure what. She proceeded to the most obvious idea: asking her friends on Facebook.

"I just knew I had to say something or I would regret it," she told KSNT Sunday.

After receiving a smattering of advice, including one suggesting Brownback "go forth and touch the wounds of the world," Hough ultimately settled on bringing the governor's attention to education.

It was an informed choice. In February, Brownback announced plans to slash $45 million in funding for public education. The move was an effort to shore up state finances, left in ruins by tax cuts for Kansas' highest earners. The announcement was only the latest in a series of cuts to Kansas schools since Brownback became governor.

The cuts were so ugly that, in 2014, the Supreme Court of Kansas sided with parents in a lawsuit against the state, arguing in Gannon v. State of Kansas that "studies in Kansas have shown that money does make a difference," and "a 1% increase in district performance outcomes was associated with a .83% increase in spending." The courts ultimately ordered schools to increase per-pupil spending from $3,838 to $4,492.

In 2014, the Center on Budget and Policy Priorities, a Washington, D.C.-based research nonprofit, found Kansas had instituted the fourth steepest cuts to education in the nation in the wake of the Great Recession, allocating 16.5% fewer resources for schools than in 2008. In inflation-adjusted dollars, that translated to a $950 reduction per student between 2008 and 2014.

At a time when Americans need more education than ever to be competitive in the global economy, it is unconscionable that Brownback would rob from his state's schools to put extra money into the pockets of people who don't need it. A quasi-reversal from Brownback to raise taxes on cigarettes and liquor is not enough and only comes coupled with promises of future tax cuts. Helpful reminders from ordinary people like Hough might be the best approach to convincing Kansas' leadership to dial back the madness and put the state's priorities where they should be.