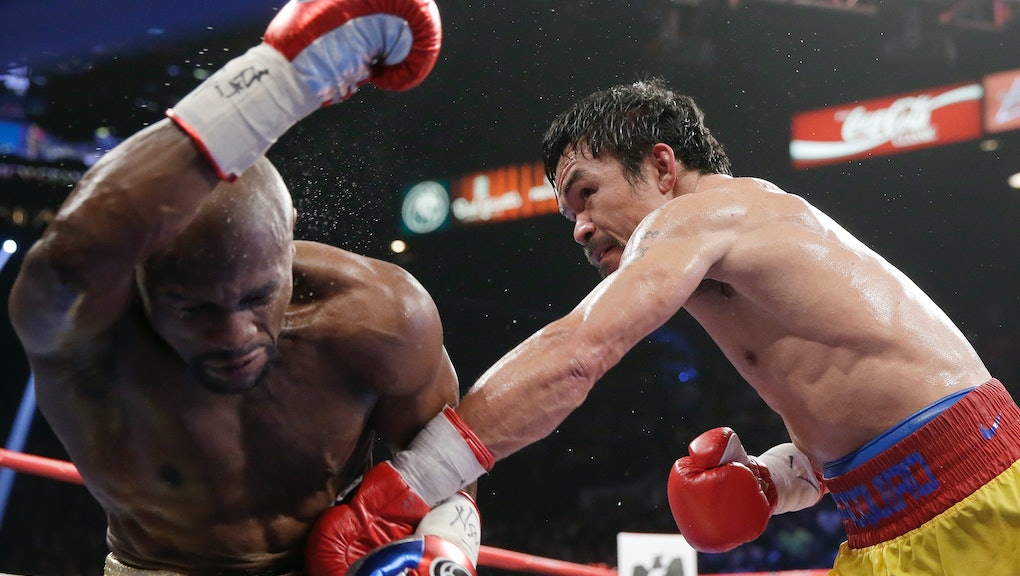 Regardless of your feelings toward pay-per-view pugilism, or the fact that two mostly unsavory characters just made hundreds of millions of dollars this weekend, one thing is for certain: The brains of Floyd Mayweather Jr. and his opponent, Manny Pacquiao, must be absolutely furious about it.

For anyone who hasn't been punched in the head, this is what it's like. If you're hit, you might experience a flash of light, a brief blackness, blurred vision and a weird "thock" sound, all depending on the severity of the blow. But what happens inside your head? That's another story.

A punch to the head does to the brain what a car wreck does to passengers.

Scientific American puts it best: If the motion of your head halts abruptly, inertia forces your brain forward. When that happens, your brain experiences a "coup" (smacking against the front of your skull) and a "countercoup" (the same feeling, but at the back of the skull).

The short-term consequences: If you've had one concussion, you're up to three times more likely to suffer another.

A punch to the head can also lead to unpleasant symptoms, such as headaches and impaired senses, that can last for days or longer, writes Scientific American.

An article in the British Journal of Sports Medicine found the average punch force of seven Olympic boxers was 3,427 Newtons (the force needed to move a kilogram of mass one meter per second squared). For reference, it takes 3,200 Newtons to break a brick.

So why don't the heads of boxers explode like bricks every fight night? That's mostly thanks to the mobility of the head and neck. Blows to those two body parts accounted for almost 90% of all of the study's injuries.

Considering the damage a professional boxer can deliver, many pro fighters develop chronic traumatic brain injury after years of action. The Centers for Disease Control and Prevention estimates that TBI affects up to 1.7 million people per year. It shares some symptoms of Alzheimer's and Parkinson's diseases.

The long-term damage: According to the New York Times, some post-concussive syndromes don't become apparent until months later. They can exhibit actual personality changes, including impulsive behavior, easy frustration and impaired judgment. This can happen if the brain isn't given a chance to rehabilitate — which could take a year, according to David Hovda, director of the Brain Injury Research Center at the University of California, Los Angeles.

According to the research from the team at Boston University, CTE starts with no symptoms in stage 1. By stage 2, patients show signs of rage, impulsivity and depression, followed by confusion and memory loss and finally, advanced dementia.

Even knowing the steps, there's no sign of players letting up. If you're playing any sport at the professional level, taking a year off is enough to force you into early retirement. Because of this, the researchers from Boston University continue to find examples of punch-drunk disease in amateur and professional football players alike.

Long story short? Keep your head away from fists.