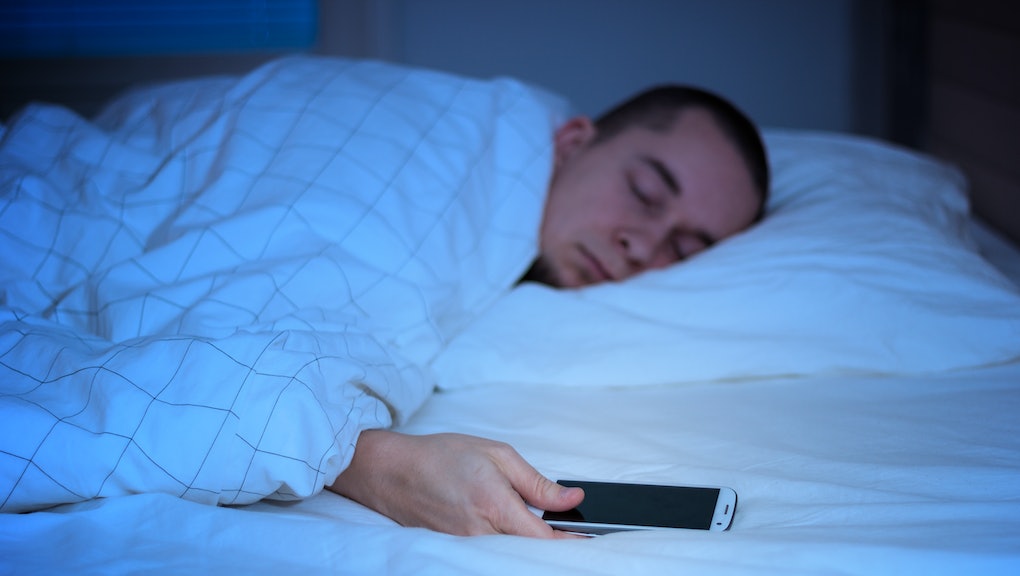 FML — We Can't Stay Awake Long Enough to Have Sex

"I almost went on a second date," Alex, 20, told Mic. "But I was so exhausted from my week and was too nervous about socializing with her and her friends all night ... I just went home and slept."

It's a common complaint and not just from haggard married folks. For every "you up?" text or "u feel like coming out?" Tinder message, there's a 20-something swapping their hookup for a night in bed alone. For all the talk of the wild and awesome sex lives of young people —  the sex-on-the-go apps, emotionless flings, underground sex parties — the siren's song of sleep might be one of the lamer realities facing millennials.

"Sometimes I wake up in the morning like, 'Seriously, body?'" she added. "It's one of those times 'it's not you, it's me' actually holds true. It is me. It's my body that's way too exhausted for even the promise of an orgasm."

The underslept generation: "I'm too tired for sex" is a common refrain to explain the waning sex lives of married people. But sleep is also a big problem for the modern 20-something, coupled-off and single alike.

According to researchers at the University of Chicago, adults in the 1970s slept an average of 7.1 hours an evening. Today, it's a mere 6.1 hours. Newsweek pointed out that millennials are "the most sleepless generation" — only 29% of us report getting sufficient sleep regularly.

Now pair that sleep schedule with a work schedule that's increasingly "on." Not only are professionals working longer hours than ever before (50+ a week), but many of us are expected to respond to email and check in on weekends, sick days and even vacation. It doesn't help that 83% of us sleep with our phones.

"We're a 24/7 society. We're burning the candle at both ends, most of us, so we are tired," William Kohler, director of Florida Sleep Medicine, told WedMD. "The lack of sleep decreases our motivation to do various things." The first to get booted from our overfilled lives? Sex.

Always on, never getting off: Maybe that's one reason why, according to the 2013 National Survey of Sexual Attitudes and Lifestyles, "millennials are having sex an average of 4.9 times a month for men and 4.8 times for women, compared to 6.2 and 6.3 respectively a decade ago," as the New Republic reported. After all, according to a 2011 poll by the National Sleep Foundation, 61% of adults said sleepiness affected their "intimate or sexual relations."

Sidney, 27, wakes up for work hours before her boyfriend, which has seen their professional schedules affect their sex schedule. "Often he's ready to go just as I'm falling asleep, and I'm ready to go when he's still sleeping in the morning," she told Mic.

"I'm more of a night owl, and my partner is a morning person," Nick, 27, said to Mic. "Sometimes [the times] we want to have sex don't match up because I'm ready to go at night when she's almost ready to go to bed. She likes to joke that I'm turned on by inconvenience."

For singles, the problem is less unaligned schedules and more sheer exhaustion. Like Anika, Samantha, 23, has also fallen asleep waiting for a late-night conversation to turn into the booty call it portended to be.

"We had been talking all night and he was out ... he just kept the conversation going for two hours, and I was getting frustrated because it was, like, 3 a.m.," Samantha told Mic. She eventually fell asleep and awoke in the morning to a text wondering why she hadn't come over. "I was like, 'Dude, what did you expect?'"

The right kind of sleep: The irony? Getting lots of sleep is supposed to be good for our sex lives. A recent study found that getting one extra hour of sleep was linked to greater sexual desire and a 14% greater likelihood of having sex with your partner the next day.

But it's got to be the right kind of sleep, rather than the kind that perpetuates a vicious cycle: We can let ourselves get enough sleep to recuperate from our overstuffed lives, or we can answer that 2 a.m. booty text, get laid and miss out on another solid eight hours. It's all about prioritizing, one night at a time.

"I just need a reminder, sometimes, that there are things more important than the next meeting or even some stupid Netflix movie," Anika said. "Yes, one of those is getting laid."