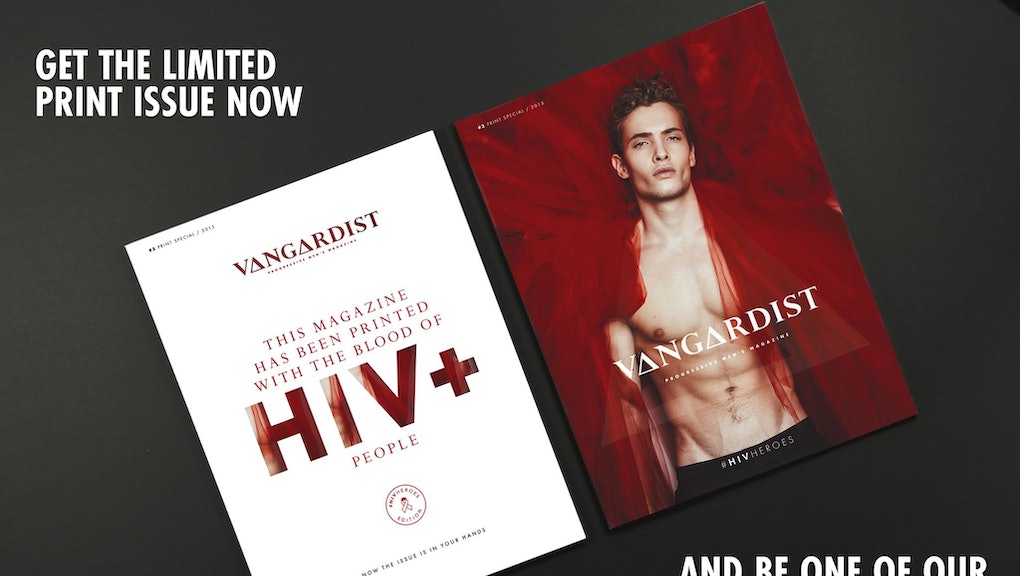 An Austrian magazine has a new answer to the question, "What's black and white and re(a)d all over?"

To raise awareness about HIV, the lifestyle magazine Vangardist published its most recent issue using blood from three different HIV-positive individuals as part of its ink. So far, the magazine's spring issue has printed roughly 3,000 of the blood-stained copies. A digital version is also already available online.

For the magazine's CEO and Editor in Chief, Julian Wiehl, it's not an issue that can wait.

"Over the last 10 years, new infections in Europe and Asia are rising," Wiehl told Mic by phone from Austria, adding he was dismayed that fighting HIV had vanished from media headlines in recent years. "People are too relaxed about it. We wanted to make a statement."

To combat the common misconception of HIV/AIDS as a "gay disease," or one that could be easily acquired through casual contact, the magazine sought out blood from a middle-aged woman who contracted the virus from her husband, an older straight man and a younger gay man. The three had their blood drawn by Austria's University of Innsbrook where it was then pasteurized, rendering it even safer, ABC News reported.

"We used [the blood] and mixed it with the printing ink," Wiehl told Mic. "When you see the magazine you will have to think, will I touch this magazine? You confront yourself with your fears."

The bigger issue. Wiehl is entirely correct about the need to create more awareness of HIV and AIDS, both to prevent new cases from developing and to better educate society about people living with the virus. At the end of 2014, the United Nations estimated the world had more than 35 million people living with HIV or AIDS. Of those, more than 3 million were children, most contracting it at birth from infected mothers.

According to Wiehl, much of the process required in bringing those numbers down has to do with reducing social stigma, which often dissuades people from getting tested. "[People] have already infected others with the virus because they were afraid of the results," he said to Mic.

It's easier said than done. While deaths have plummeted in the West due to the emergence of new medicine to fight the virus, Wiehl told Mic that ignorance remains high. So far, the reaction to Vangardist has been "mixed," with many people erroneously thinking the project is medically unsafe. Wiehl said one person even demanded he be put in jail for "attempted murder."

AIDS-related illnesses killed an estimated 1.5 million people around the world in 2013. Unlike in the grim days of the 1980s, both the tools and the knowledge exist today to bring those numbers down. Today, AIDS is only a death sentence if it's allowed to be. Defeating ignorance and fear is a central front in the fight against the virus. By forcing people to literally hold the blood of HIV-infected people in their hands, Vangardist sent a simple but powerful message that living among people with HIV, can, and should, be as normal and safe as living around anyone else.