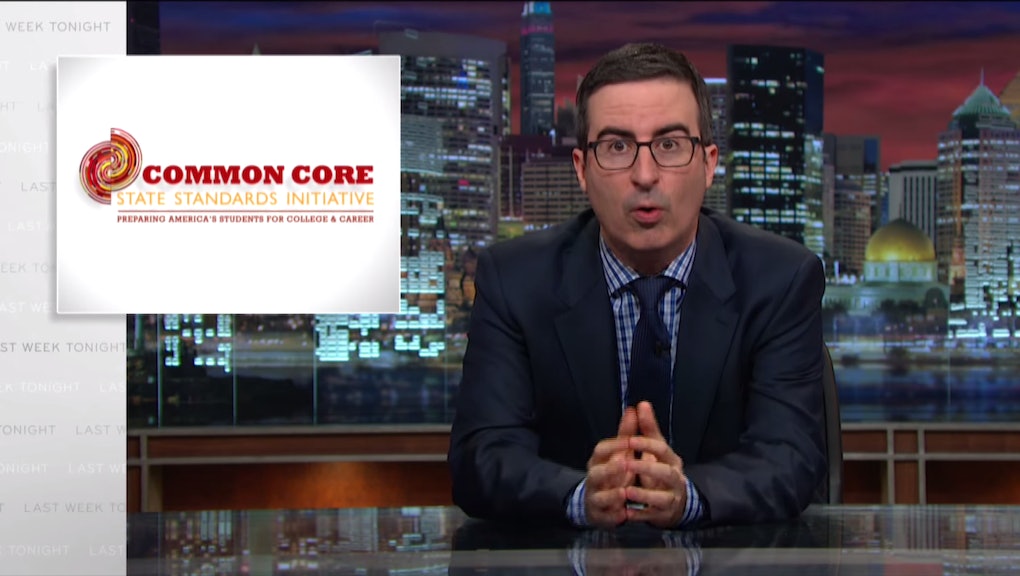 There aren't many things students and teachers can firmly agree on, but a mutual hatred for standardized tests may be one of them. With the number of high-stakes exams students have to take exploding and the people who sell and design them less accountable than ever, it's high time this system gets an overhaul.

Thankfully, we have John Oliver to give standardized testing the failing grade it deserves. In the latest edition of Last Week Tonight, the British comedian slams the testing industry for turning school into a pointlessly stressful experience for students, leading to a booming industry in opaque testing companies that hire graders on Craigslist and don't teach kids useful skills.

In fact, the tests usually involve impossibly difficult questions, are full of mistakes and sometimes aren't even graded properly. The result is tests so stressful kids get sick taking them.

According to Oliver, U.S. students now take up to 113 standardized tests, or, as Oliver puts it, a number "approaching the amount you'd ask your doctor for the morning after you woke up from a one-night stand with Colin Farrell." The host points out that each and every one of these tests can have "human consequences," showing a clip from one young student who said she scored highly in normal classes but could face penalties like being removed from advanced classes for one poor score on the FCAT.

Oliver saves particular ire for Pearson, a testing company he calls "the educational equivalent of Time Warner Cable. Either you've never had an interaction with them and don't care, or they've ruined your fucking life." In interviews with former test graders, Oliver reveals that many of them were told to artificially adjust test grades to fit a curve.

As Oliver points out, this testing monster was at least partially the result of the No Child Left Behind Act of 2001, an educational law backed by President George W. Bush that passed with an overwhelming majority in Congress.

But this isn't necessarily a partisan issue. As Oliver points out, the same vague promises of reform that led to No Child Left Behind being rushed through Congress are now being used by President Obama to tack on even more strict testing initiatives.

The point of this critique, Oliver says, is to point out the United States' system of standardized tests is simply not delivering results, but instead shields the companies responsible from any accountability. So maybe it's time to start looking a little harder at the tests themselves instead of twisting our educational system to pass them.

As U.S. schools continue to rely on standardized tests despite dropping performance scores, especially as compared to other countries, it's clear something needs to be done. Obviously, fixing the education system is more complex than getting rid of some tests, but it's a start.

Watch the entire clip below, courtesy of HBO: