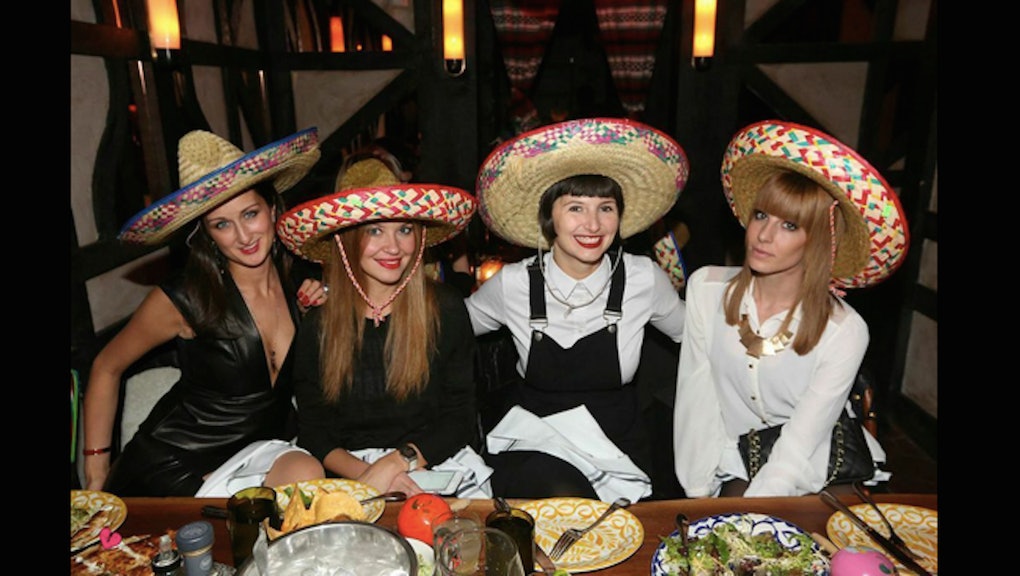 The Real Roots of Cinco de Mayo May Surprise You

Ah, Cinco de Mayo — another cultural holiday for Americans to get wasted and look like racist idiots.

For Americans, Cinco de Mayo is another excuse for excess — to drown themselves in Mexican beer and margaritas, and wear sombreros for fun, as if donning one imbues one with actual culture. "Cinco de Drinko," was how Good Morning America anchor Lara Spencer referred to it last year, before she tweeted an apology, while the hosts of MSNBC's Way Too Early had to apologize for their own margarita-and-sombrero incident. Indeed, on this one day, Americans drink more beer than on St. Patrick's Day or during the the Super Bowl.

While the United States will go to great — even deadly — lengths to secure its border from Mexican immigrants, it will gladly accept aspects of Mexican culture that it can bastardize.

As it turns out, though, Cinco de Mayo is "100% an American celebration," according to UCLA professor David Hayes-Bautista, author of the book El Cinco de Mayo: An American Tradition. In fact, Hayes-Bautista told the Huffington Post that the holiday "commemorating a Mexican victory over the French at Puebla in 1862" is more widely celebrated in the United States than it is in Mexico.

May 5 is not "Mexico's Independence Day." The actual day of independence — Grito de Dolores — is September 16. May 5 is misconstrued as Mexico's independence day because the Battle Puebla victory occurred during the American Civil War. Mexicans who had migrated to States were inspired by this victory in relation to their own lives — Mexicans in the States were aligned with the Union while the French supported the Confederates.

"It was all created in this country by Latinos who supported freedom and racial equality and who were opposed to slavery, supremacy and the exclusion by government," Hayes-Bautista told the Huffington Post.

News of the victory at Puebla was seen as parallel to a Union win over the Confederacy, or "the army of freedom and democracy" prevailing over "the army of slavery and elitism," Hayes-Bautista told CNN.

It wasn't until the mid-20th century, during World War II and later during the Chicano Power movement of the 1960s and '70s, that Cinco de Mayo was established as the type of holiday that it is today. America's Reagan-driven, capitalist boom of the 1980s created the day's "undeniable commercialization in the late 20th century," Hayes-Bautista told CNN," as "a fake holiday recently invented by beverage companies."

Cinco de Mayo's historical value is in its spirit of democracy and democratic union. This spirit, in America in 2015, has been translated into a day of debauchery punctuated by acts of casual racism.