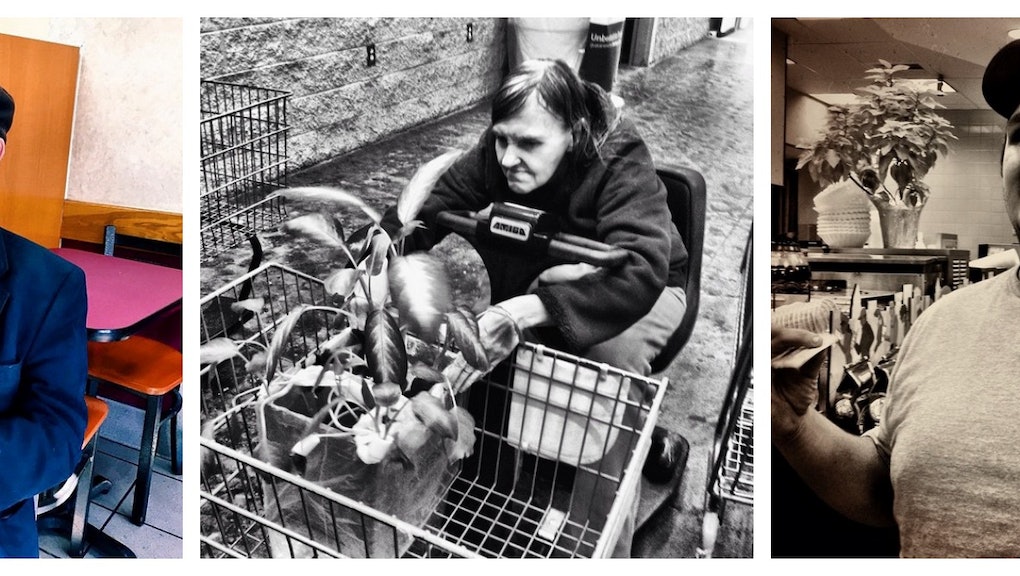 "I was really dismissive of this stuff," Sharlet, a magazine journalist and author, told Mic by phone from his home in Vermont. "I signed on, actually, just for family things and kid pictures." But after a time, he began to recognize that Instagram wasn't just a platform for pointless personal junk — it was also a brilliant storytelling tool.

Just over a week later, he turned the camera outward. Sharlet began to document regular people and their stories, posting snapshot portraits accompanied by miniature stories that describe bits and pieces of his subject's life.

Sharlet's Instagram profile series borrows elements from his features for Harper's and Rolling Stone. They offer a glimpse into someone else's life; they pinpoint what makes his subjects who they are. But they're also distinct in their own way. Peruse Sharlet's account, @jeffsharlet, and one thing will be clear: You've never seen an Instagram account like this. You might even argue that the man is breaking new ground in journalism.

"Larry LaRose and I stood together at midnight in Rutland, watching the hammer fall."

In fact, the impetus for Sharlet's Instagram profiles rose from a creeping sense of frustration with magazine writing. "This was a way out," he said. "This was a way of writing these things that's wholly satisfying. It's like going back to the beginning of one's writing life, when you don't have any assignments, and you're just writing for yourself."

He compared his gravitation toward Instagram profiles to another beloved medium he often uses to distract himself — comic books.

"What the comic books give me, and what I think is connected to Instagram, is they always get me out of a rut when I'm stuck in a story," he said. "I start thinking about what comic book geeks call the gutter, which is the space between panels. I was looking at [Instagram], and I was like, 'Oh, look — this is a comic book.' If you look at the grid, you have all these panels. And now I can make my own comic book."

"'We were scary and we were dying,' Elena would write years later in her journal."

Another appeal: Instagram allowed Sharlet to try his hand at photography, which he described as an "old love."

"I never thought of myself as a picture taker. But now I could do this," he said. "So it was these two things coming together — photography and comics — and suddenly Instagram had democratized both of these to the extent that I could do that. And so I did."

His first subject, Larry, worked in a junk shop. A little while later, Sharlet ventured out to the Dunkin' Donuts in his hometown — the only thing close by that also stays open late — and profiled one of the cashiers. He can find subjects nearly anywhere, thanks in part to his training as a journalist, a profession that depends on one's lack of inhibitions. Sharlet simply met strangers and asked them about their lives.

"The Dunkin' Donut ones, I just went and sat down. I had my computer with me. I sat down and wrote them up right there on the spot," he said. "Or [I'll] pull over on the side of the road and find someplace that's online and write them up."

His work reflects genuine curiosity. This kind of project, with its fascination with the oh-so-ordinary, can verge on preciousness, but Sharlet takes the time to talk to his subjects, and seems to consider deeply what they tell him.

"At first I thought Larry might be a not-so-secret villain."

"I like the serendipity of it," Sharlet said. "You stumble onto something. I started doing this at a low point. I was frustrated with the writing formula, my father was sick, I was depressed — and it was a way of opening my eyes to things around me. Once you start doing that, it becomes overwhelming in this kind of wonderful rush."

Profiles of the real America used to fill magazine pages. Nowadays, print publications begin to see reporters follow celebrities around, profile big-name public figures and focus on flashier things to compete for readers' waning attention. Sharlet's foray into Instagram, on the other hand, hearkens back to the style of Norman Mailer, Joan Didion, Truman Capote and others.

"One of the revelations is that it brings you back to the early days of literary journalism because you had license to be curious about anything and talk to anybody, and discover there's all these dramatic stories" in spots like Dunkin' Donuts, he said.

Instagram lends itself to documentation, to capturing the quotidian, the normal, the ordinary. It has, in a way, replaced the Polaroid as a medium for the mundane: "little lives," as Sharlet calls them. In college, he collected old snapshots, often found tucked between the pages of books found on the street. He'd arrange them into a cohesive collection. "Now I can waste time," he said, laughing, "and a lot of other people see it."

That may be where Instagram differs the most from old-school literary journalism. Not only does it allow for a tremendous diversity in viewership, it also lets users easily connect with the people viewing their work, a democratization that Sharlet said is the best part of the entire process.

"You don't have any control over how people read it," he said. "And they're going to read it as part of their own curated thing, and so all the crap that people dismiss on Instagram, well, your story is part of that. Suddenly, whatever you're writing becomes part of other people's everyday lives in a way that it [usually] never does."

"'I bounce around,' says Mary. An apartment here, a shelter there, nights beneath a bridge in between."

After Sharlet published a story in GQ about the LGBT community in Russia, the magazine posted a series of Instagram profiles from his trip to its blog. His account gained an entirely new audience — men who read about cologne and clothes in their spare time, for example, a group that he didn't expect to be interested in his subject matter.

"Instagram allows you to see the readers," he said. "It starts really messing with your idea of who reads what and how they read it."

One of his favorites, he said, was a man whose profile picture showed him standing on his speedboat, urinating off the edge while he smoked a cigar. Another rash of followers — gun advocates — popped up after he posted portraits of people carrying weapons. They ended up staying for the long haul. "I didn't think the gun nut was going to be into pictures of the homeless woman, but there he is," he said.

Other Instagram users, like National Geographic photographer Neil Shea, are engaging in similar methods of new wave journalism. Shea's shots are a little more sophisticated than Sharlet's, but they nonetheless represent the same impulse: to tell people's stories in new, innovative and creative ways.

"Rain clouds slide toward the city of Slemani, soaking old shepherds in the hills ..."

Sharlet isn't planning on giving up his regular gig any time soon. His conversation with Mic took place while he was on deadline for an upcoming magazine story. He did wonder, however, how this project would evolve in relation to his regular work. "I worry whether this has become a sort of professionalized thing," he said. "Will this be ruined for me? Will it not be as liberating anymore?"

The two sides have interacted before. In September, Longreads published "#Nightshift," a collection of Sharlet's Instagram essays about people who work the graveyard shift. He even wrote about the series for the New York Times Magazine in January.

The two crafts of Instagram and journalism borrow from each other, but they occupy divergent planes. "It's a little bit of a different headspace," he said. Besides, his profiles have begun to carve out their own space in his world. "These Instagram essays aren't distractions from my work," he wrote on Facebook in September. "They're becoming my work."

"It was a rebirth," he told Mic. "I like some of those sentences. They're as good as anything I've done. You don't want to mess with that."