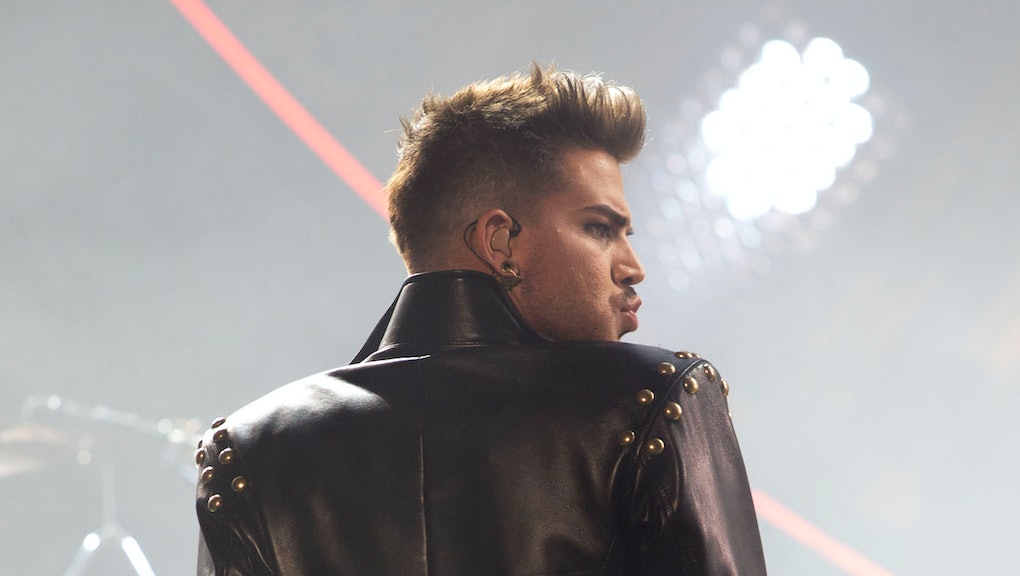 Adam Lambert's third album, The Original High, is due out in June, and its first single, "Ghost Town," is earning rave reviews. Yet somehow, Lambert releases never quite get their due. Though he's the first openly gay musician to debut an album at No. 1 on the Billboard 200, he's still thought of as something of a lesser pop star.

When you hear people talk about Lambert, they're usually being somewhat dismissive. He's the former American Idol contestant or he's the stand-in for Queen's Freddie Mercury or he's that gay singer. But few give him the credit he's due: Lambert is one of the greatest performers and best voices of the decade.

Whether it's from the stigma of having gained fame through a reality show, or being known solely as a cover artist, Lambert is woefully underrated. And it's about time we started taking him seriously.

An actual American Idol. People may look down on singing show vets, but Lambert earned real distinction as an American Idol. Before he became a successful solo artist and went on to tour with Queen, Lambert auditioned for American Idol by singing the band's "Bohemian Rhapsody." During his time on the show, Lambert was praised as one of the most original acts to grace that famous stage.

"Most Idol vets are the rock, pop and R&B equivalents of training wheels, safe and dull, exciting only for those who don't know any better," the Las Vegas Review-Journal wrote in 2010. "For a show whose contestants often pack all the spark of a pack of wet matches, Lambert's a lightning rod."

Though Lambert didn't win season 8 of American Idol, that season was even informally referred to as "The Adam Lambert Show." And at the end of it all, who showed up but Queen themselves — Brian May and Roger Taylor joined Lambert onstage for the final musical number of the season. "The chemistry was so apparent," Rolling Stone wrote, "that there were immediately rumors suggesting [Lambert] was going to become their new frontman."

Solo success. But before he seriously joined Queen onstage, Lambert released two solo albums, For Your Entertainment and Trespassing. His work revealed an artist with clear vision and unapologetic swagger and a bold comfort with his sexuality. Critics praised both albums, but the topic of his sexuality was never far beneath the surface.

"Trespassing represents a swinging night out with a spectacularly charismatic voice," Billboard wrote. "The majority of the album is pure kinetic energy, with Lambert delivering its choruses rapidly and squeezing over-the-top sexuality into every tawdry syllable."

Previously, that bombastic sexual expression went too far, some critics claimed. But instead of stooping to their level, Lambert used the perpetual conversation around his sexuality — and the backlash to an especially public kiss in 2009 — as opportunities for championing growth in both music and the LGBT community.

"It's a shame because I think that there's a double standard going on in the entertainment community right now," Lambert told Rolling Stone, according to the Washington Post. "Female performers have been doing this for years — pushing the envelope about sexuality — and the minute a man does it, everybody freaks out. We're in 2009; it's time to take risks, be a little more brave, time to open people's eyes, and if it offends them, then maybe I'm not for them."

Becoming a legend. Two years after his sophomore album release, Lambert joined Queen for a summer tour, five years after he sang "Bohemian Rhapsody" at that fateful American Idol audition. Once again, he was covering another artist, but Lambert's vocal genius is his ability to imbue any song with his distinctive personality and undeniable charisma. "What's happened since then is just surreal to me," he told Rolling Stone. "It's so crazy that this came out of American Idol. I don't think I would have seen it coming back then."

Lambert's performances with Queen were fantastic: He performed as Adam, not as Freddie, and his talent shone through. The result was a run of high-energy shows that pleased even the most die-hard Queen fans.

"They're difficult songs to sing, Queen songs," guitarist May told Japan's Universal Music, according to Billboard. "There's too much range. So many people can't sing them in the original key, even if they are good singers. Adam comes along, [and] he can do it easy. He can do it in his sleep! He can sing higher than even Freddie could in a live situation. So I think Freddie would look at this guy and think ... 'Hmm... You bastard. You can do this.'"

His own act. Lambert is more than just a cover artist, though. He was so inspired by touring with Queen that the band's music helped inform his forthcoming album. But The Original High was never guaranteed. In fact, record label RCA wanted Lambert to record an album of '80s covers; luckily, he was having none of it. Lambert swiftly dropped RCA and signed to Warner Bros. within 24 hours of the news breaking.

It's his clear artistic vision that truly sets Lambert apart from the hordes of pop star wannabes. "While it is rare for an artist to executive-produce his or her own release," Billboard wrote of Trespassing, "Lambert insisted on having full creative control." And for The Original High, Lambert teamed up with mega-star producer Max Martin for what's already shaping up to be one of the most-anticipated summer releases.

Lambert is so much more than a fleeting pop sensation. He's a talented songwriter, an amazing performer and a style icon to boot. And with the upcoming release of his third solo album, it's about time we all started calling Lambert what he really is — a rock star.