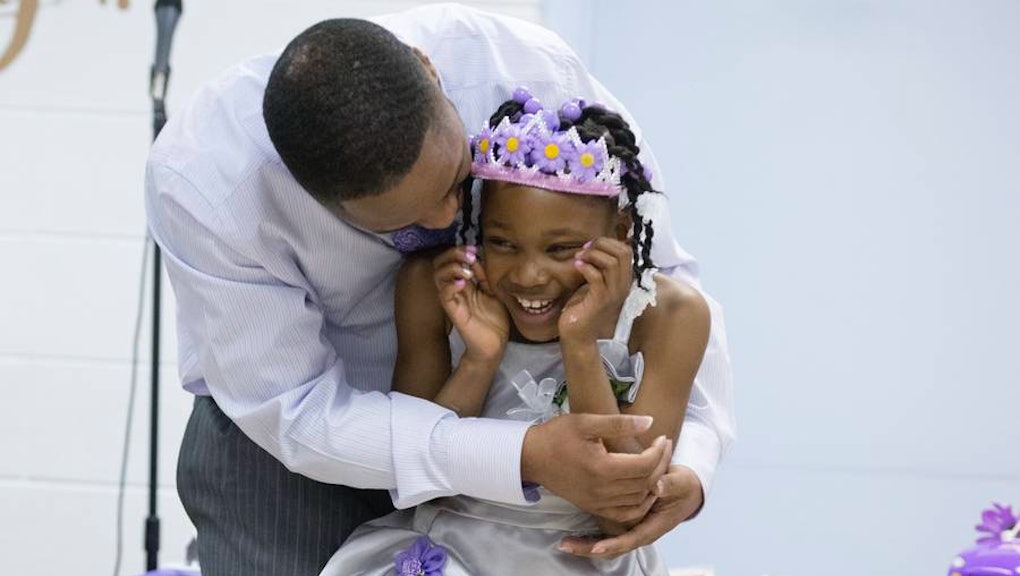 This Surprising Figure Shows Dads Are Leaning In Like Never Before

While women are carving new roles for themselves in the workplace and are rejecting expectations of motherhood arguably more than ever before, their male partners and colleagues are also making sacrifices at unprecedented rates to achieve the elusive goal of work-life balance. In fact, they're apparently doing so more frequently than women.

The present partner: Numbers from Harris Interactive and consulting firm EY showed American men were more likely than women to make career sacrifices to achieve better work-life balance, the Huffington Post reported Tuesday. More than half to nearly two-thirds of the men surveyed were either willing to or actually had changed jobs or given up promotions in the interest of their family. More than a third of these men said they'd be willing to take a pay cut and just over a quarter said they'd go abroad in the interest of better parental leave benefits. Women respondents were overall less likely than men to report willingness to make these same decisions.

This study adds to a growing body of research indicating that men are becoming more involved with their families. Just last week the organization A Woman's Nation released a poll revealing over half of the men surveyed valued being a "present partner" over a "provider." About 550,000 men stay home full-time with their children — about double the number in the 1970s, a 2013 Pew study revealed. The statistic is reflected in this Mic video, about dads who stay home with their kids while their partner brings home the bacon:

A Monday New York Times piece illustrated this shift. One male junior manager quoted in the article said he tries "to head out by 5, get home at 5:30, have dinner, play with my daughter" and generally limit working on the weekend, for instance.

But why aren't women making these sacrifices? Women are hardly less likely to make career sacrifices because they care less about work-life balance. Rather, it's more likely that men are able to make these choices because they don't face the many structural workplace barriers women have historically encountered.

First and foremost, the gender wage gap — the fact that women make 78% of what men do — ensures that even if men make sacrifices, they'll still be at an overall financial advantage as compared to women. It's also disproportionately difficult for women to re-enter the workforce after leaving their jobs for extended periods to raise their children. As Karyn Twaronite, the diversity and inclusiveness officer of EY, told the Huffington Post, men "face fewer headwinds" when they attempt to re-enter the workforce, so may feel more confident leaving in the first place.

While a culture in which men are more involved in their families is undeniably progress, it also fails to fully address the many systemic factors that still hold women back. We should certainly celebrate this welcome addition to equality in the workplace and home, but recognize that there's still plenty of work left to be done.