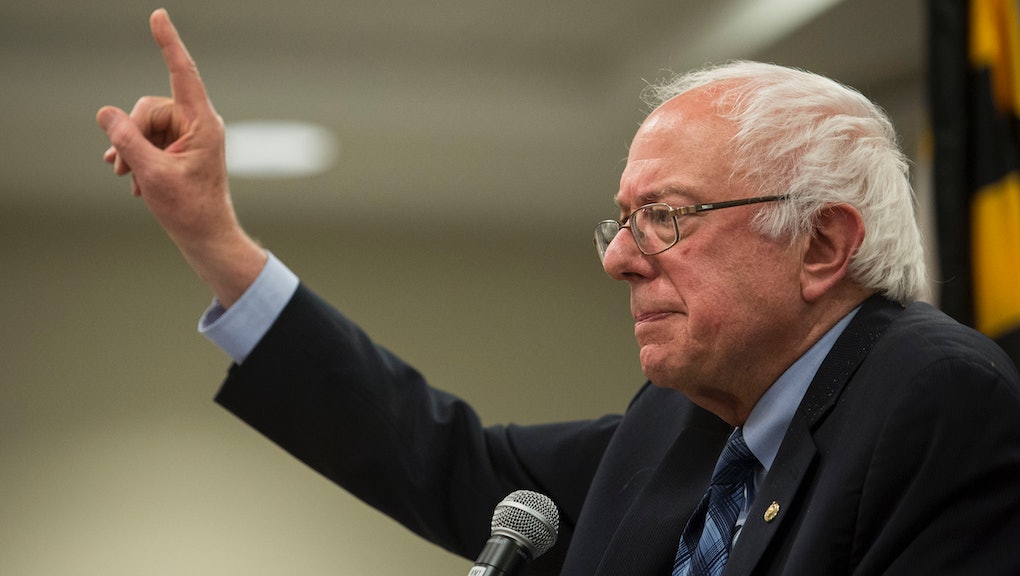 People who like Bernie Sanders, love Bernie Sanders. The independent senator from Vermont, a self-described "democratic socialist," announced he would challenge Hillary Clinton for the 2016 Democratic presidential nomination last week, setting off an outpouring of affection and fundraising support for the 73-year-old Brooklyn, New York, native.

To say Sanders is the most liberal candidate in the race is not just an understatement, it fundamentally misstates his place on the political spectrum. From a policy perspective, Clinton has more in common with Republican hopefuls like former Florida Gov. Jeb Bush or Sen. Marco Rubio (Fla.) than Sanders, who advocates for single-payer health insurance, free college for all Americans and rewriting U.S. free-trade agreements.

In the end, the same money Sanders wants kicked out of the electoral game will likely sink his campaign. For now, though, and over the course of six Democratic primary debates, Sanders' demands — and those of the millions who support his message — will be heard.

Here are 11 quotes from his time in Congress, on issues ranging from Wall Street regulation to health care reform, that have made Sanders a hero to American progressives:

1. On Wall Street's death-grip on Congress

"I think many people have the mistaken impression that Congress regulates Wall Street," Sanders told CNN's Wolf Blitzer in May 2012. "In truth that's not the case. The real truth is that Wall Street regulates the Congress."

2. On the government failing to hear the will of the people

"There is a lot of sentiment that enough is enough, that we need fundamental changes, that the establishment — whether it is the economic establishment, the political establishment or the media establishment — is failing the American people," Sanders said during a discussion in April at the Brookings Institution.

3. On the Supreme Court decision to give corporations First Amendment rights

"In my view, a corporation is not a person," Sanders wrote Dec. 8, 2011 in the Huffington Post. "A corporation does not have First Amendment rights to spend as much money as it wants, without disclosure, on a political campaign. Corporations should not be able to go into their treasuries and spend millions and millions of dollars on a campaign in order to buy elections."

"If a financial institution is too big to fail, it is too big to exist," Sanders said in another piece for the Huffington Post. It was October 2011 and he was writing in support of the growing Occupy Wall Street movement.

5. On big-money campaigns to quiet the declining American middle class

"We got a collapsing middle class," Sanders told Bill Moyers in October 2014. "We have more wealth and income inequality today than we've had since the 1920s. We have all of these enormous issues. And what big money can do is put an unbelievable amount of TV and radio ads out there to deflect attention from the real issues facing the American people."

6. On the growing influence of billionaire political donors

"I am talking about a war being waged by some of the wealthiest and most powerful people against working families, against the disappearing and shrinking middle class of our country. The billionaires of America are on the warpath. They want more and more and more," Sanders said in 2010 in the course of more than eight hours spent on the Senate floor during a quasi-filibuster of a deal to extend the George W. Bush-era tax cuts.

7. On the best way forward for health care reform

"If the goal of health care reform is to provide comprehensive, universal health care in a cost-effective way, the only honest approach is a single-payer approach," Sanders told the Washington Post in 2009, as the fight over Obamacare was heating up.

8. On who has been hurt most by the effects of the 2008 financial crisis

9. On the threat posed by election spending laws

During his long discussion with Moyers, Sanders spoke about how he might try to build a campaign.

"You have to bring people together who may not agree on every issue," he said, "but who understand that the middle class is collapsing and we are moving toward an oligarchic form of society, where the billionaires will control the economy and the political life of this country."

10. On the historic effects of the Supreme Court's Citizens United ruling

"The ruling has radically changed the nature of our democracy," Sanders wrote in the Huffington Post, introducing his plans to introduce a constitutional amendment essentially reversing the high court's decision to remove a series of barriers to corporate influence in political campaigns. "It has further tilted the balance of the power toward the rich and the powerful at a time when the wealthiest people in this country already never had it so good. History will record that the Citizens United decision is one of the worst in the history of our country."

"I've run outside of the two-party system, defeating Democrats and Republicans, taking on big-money candidates and, you know, I think the message that has resonated in Vermont is a message that can resonate all over this country," Sanders told the Associated Press on the day he announced his 2016 run.

"People should not underestimate me."