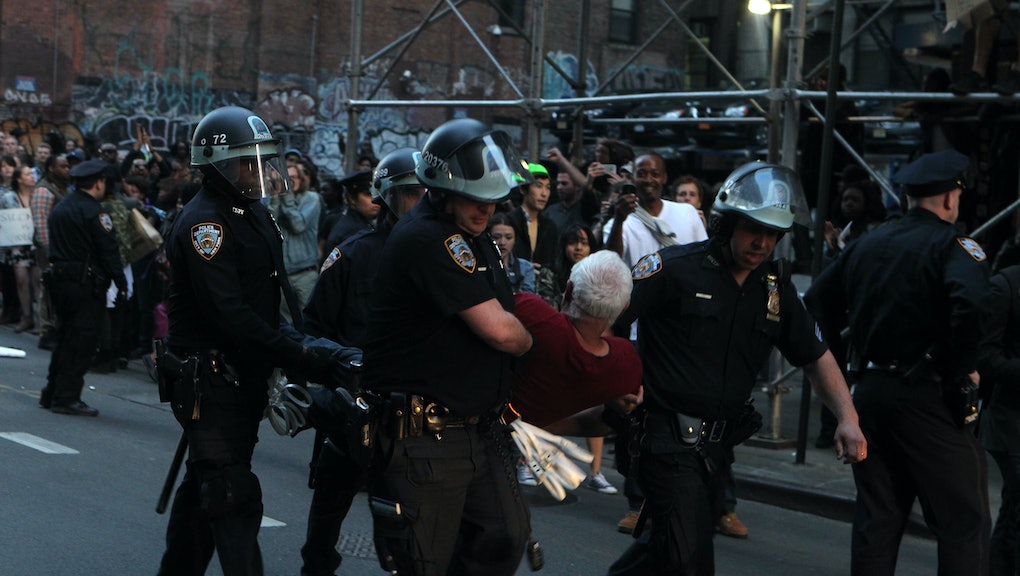 When Jason Disitso saw New York Police Department Officer Jonathan Munoz walk up to his friend and begin inappropriately touching her, sticking his hand in her pockets and frisking her, he did what anyone concerned with her safety might do in the 21st century: He asked another friend for his cell phone and began recording Munoz.

Minutes later, Disitso was being driven away in cuffs. According to sworn testimony from Munoz, the March 12, 2014, incident escalated quickly when Disitso tried to punch him.

But that's not what happened. Though the officers did seize Disitso's phone, nearby surveillance cameras caught the entire incident on tape. From the footage, it's perfectly clear that Disitso never took a swing at the police. Instead, the boys in blue look an awful lot like they decided to bring him in for merely exercising his right to film law enforcement in public.

From another angle, the camera picks up just how aggressive the officers got with Disitso just moments after the incident began.

The recovered surveillance shows Munoz was primarily interested in getting that phone out of Disitso's hand. That goes a long way towards explaining why the charges against Disitso were, according to Gothamist, dropped on July 11 and both Munoz and his partner Edwin Florez have been placed on modified duty (desk work). Both Internal Affairs and the Manhattan district attorney's office are investigating the incident, and Disitso is suing the city.

Seeing is believing. Without the video, this story would have most likely played out another way — with Disitso facing charges for attacking an officer, and Officers Flores and Munoz still patrolling the streets of the city, harassing women with no consequences.

Alarmingly, if this recent report from NBC 4 News is any indication, this kind of thing happens all the time. The Civilian Complaint Review Board "investigated 42 cases over a six-month span in 2014 where civilians videotaped police," according to NBC 4 News, in which 27 involved alleged police misconduct, despite the law being "very clear that officers should not interfere with a person videotaping a police."

As for prosecuting Munoz for allegedly lying about the incident in a police report, good luck. A 2014 FiveThirtyEight investigation found officers are rarely convicted or incarcerated for any kind of alleged misconduct, while New York Civil Liberties Union senior attorney Alexis Karteron told NBC that city officers routinely disregard both the law and NYPD policy on the right of citizens to record police.

This just goes to show how easy it is for the police to arbitrarily decide to arrest someone for doing nothing wrong, in full view of the public, and then lie about it with full confidence they will be treated with impunity. Sans cameras, it would have been Munoz's word against Disitso's. Who knows how often this really happens?

Watch the full video, with commentary, below.