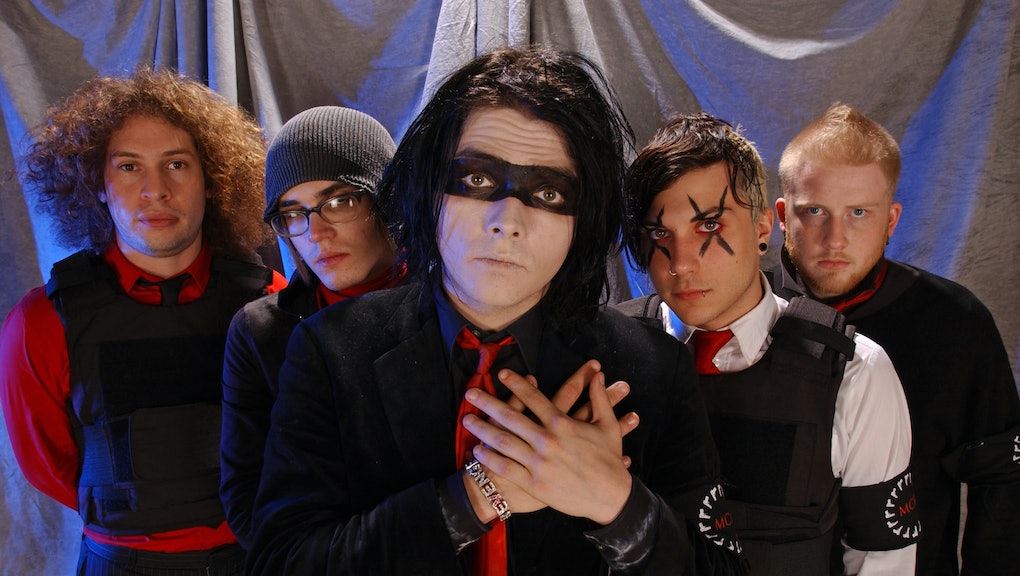 When I was in high school, it was a thrill to live the emo lifestyle — it was middle America's answer to the Sex Pistols. Like me, emo bands were misunderstood. They were decidedly outcast, and that made me love them. It made emo the closest thing I had to living dangerously.

Yet many former emo kids feel pressure to hide their flatironed, eyelined pasts. But it's time to set that kind of thinking aside. It's time to embrace our emo phases.

My emo is different than yours, because the genre is purposely rough-cut. "Emo means different things to different people," Andy Greenwald wrote in his book Nothing Feels Good: Punk Rock, Teenagers and Emo. "Actually, that's a massive understatement. Emo seems solely to mean different things to different people." Technically, "emo" is short for "emocore," a genre of hardcore punk that obsesses over emotions. But more than anything, it's music defined by the phase of life in which people listen to it. "Emo is an essential element of being a teenager," Greenwald wrote. "It is the sound of self-making."

But emo music and the corresponding lifestyle get a bad rap. The music's preoccupation with emotion is interpreted as vain and pretentious. Out-of-touch parents blame the music for their children's predilection toward self-harm. The scene's clothes (Hot Topic like it's going out of style), hair (oh, you mean it isn't naturally blue?) and makeup (painstaking eyeliner applications) especially seem to rub people the wrong way. Emo is despised by outsiders, but ironically, that's what makes it so appealing to its community. Your emo phase is not something to be ashamed of — in fact, you should embrace it.

So: Is Gerard Way the hottest member of MCR?

The science behind the phase: The time when most kids go through their emo phase — 14 to 18 years old — also happens to be the developmental stage where we formulate our tastes in music. If you went through an emo phase, the music you enjoy listening to now is informed by that phase in your teenage years, whether you know it or not.

"Fourteen is a sort of magic age for the development of musical tastes," Daniel J. Levitin, a professor of psychology and the director of the Laboratory for Music Perception, Cognition and Expertise at McGill University, told the New York Times. "Pubertal growth hormones make everything we're experiencing, including music, seem very important. We're just reaching a point in our cognitive development when we're developing our own tastes. And musical tastes become a badge of identity."

That "badge" is an especially strong force in the emo community. The music is, after all, about the self and the feelings of isolation so many kids face. Take Fall Out Boy's song "Get Busy Living or Get Busy Dying (Do Your Part to Save the Scene and Stop Going to Shows)." The long title is a trademark of emo songs, like an inside joke that's reserved for the scene.

Bringing together, not isolating. Sometimes the tightness of that scene seems alienating, but it isn't so. Contrary to the concern that emo isolates or encourages self-harm, science shows music is an important factor in helping people find new communities. If emo is dangerous, then it's also salvational. Those with similar music tastes tend to gravitate toward each other, and emo provides an especially strong communal identity.

"[Emo] music was a welcoming, self-affirming community," Greenwald wrote. "All the kids who listened to emo ... were seeking to validate themselves, to join in something shared and secretive."

And all those poseurs with their "Ohio Is for Lovers" T-shirts came late to the party.

Emo as therapy. In addition to a shared community, emo music also acts as a kind of therapy. Science shows that listening to music is a safe and healthy way to work through those pent-up, hormone-fueled emotions. Emo music is chock-full of emotions, ranging from sad to angry to lovelorn. For one, Vice reports that people who enjoy sad music tend to be more empathetic or other-oriented. "Sad music may offer us a safe proxy to work through our own feelings — and offer us comfort that we aren't alone," Mic's Jordan Taylor Sloan wrote previously.

If that doesn't convince you, consider that scientists believe sad music has an important neurological function. When we listen to sad music, our brain releases the same chemical, Prolactin, as when we have sex, eat or exercise. That chemical is an important part of the brain's ability to process grief, which suggests that sad music actually has neurological benefits.

The real meaning: But to a certain extent, all that scientific proof is a way to justify something that shouldn't have to be justified: personal taste. Even considering the music from a technical standpoint, emo has lots of redeeming qualities: smart melodies, catchy hooks, heavy guitar riffs and poetic lyrics.

But that outsider status was what made emo legitimately dangerous. By the time I got to high school, punk had been anesthetized by legend and all but subsumed by emo — everyone knew bands like the Sex Pistols or the Ramones were beloved and safe. Punk's legacy of risk and danger, then, became emo's function. In fact, even Green Day's American Idiot was considered emo by some when it was released.

So why be embarrassed by a part of your life that was so important? My emo phase is part of who I am, and I'll never forget it.