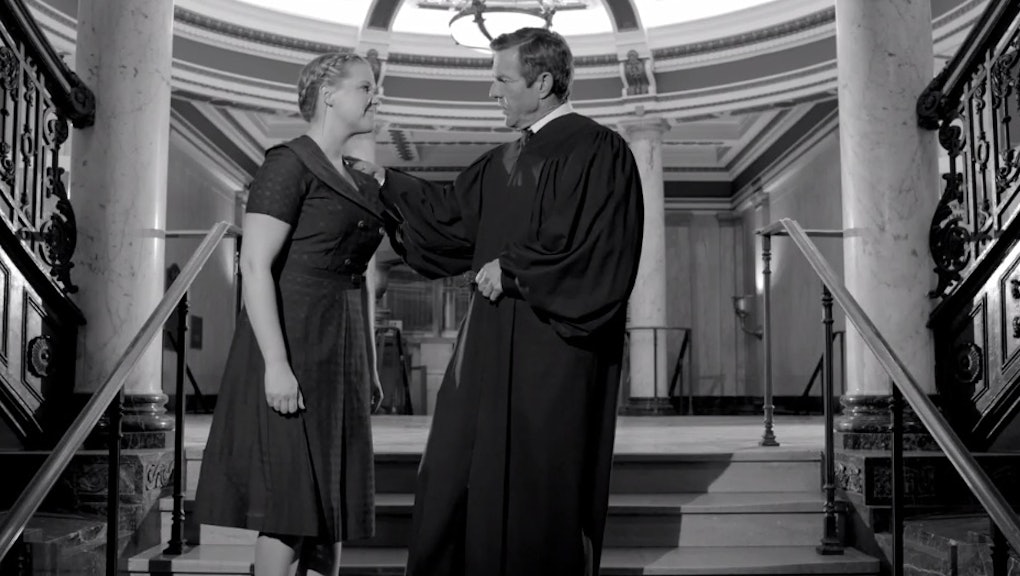 The third season of Amy Schumer's Comedy Central show, Inside Amy Schumer, has been gunning for the large cultural problems all women face: pervasive rape culture, Hollywood's backward ageism and the media's obsession with "real beauty."

What do all those issues really come down to? Men's objectifying judgment of women's bodies.

Schumer took on that issue — and 12 men in particular — flawlessly in Tuesday night's episode, a parody of the 1957 film version of 12 Angry Men, in which an all-male jury must decide: Is Schumer hot enough to be on TV?

The foreman, played by Jeff Goldblum, takes a preliminary vote from the jurors, played by guest stars such as Paul Giamatti, Nick DiPaolo and Vincent Kartheiser.

Eleven votes against, while one lone juror, played by John Hawkes, is not ready to convict Schumer of being too unattractive for TV. He suggests the jurors discuss the many sides to the issue.

Their decision is important. After all, a woman's hotness means life or death in an appearance-obsessed society.

While the strict aesthetic standards for women on TV and film are well-established, some jurors point out that what really turns them on in real life is less clear-cut.

The dissenting juror points out that every man, at some point, has been turned on by a woman who didn't meet the traditional beauty standards, and that's all the system demands to acquit Schumer. In other words, is she hot enough in real life — does she give them a "reasonable chub?"

But after careful re-evaluation, the men realize that despite their preconceived notions of what Schumer looks like, when they watch her, they all have a "reasonable chub."

The verdict is in. Because all 12 jurors decide they would "bang" Schumer, her case is dismissed.

Constantly being judged: Schumer, who has been criticized by the media for being "not conventionally attractive," is no stranger to the media's sexist double standards. But her message goes far beyond the personal.

The idea for the episode came to Schumer when she overheard men at a party evaluating actress Michelle Williams' looks and deliberating whether they would sleep with her, according to Vanity Fair. Incensed, Schumer decided to bring what happens in the real world to a fictional court room. Under the male gaze, women's bodies are always on trial.

"It's a theme that has been kind of ever-present on the show — women constantly being evaluated and the sort of rage men have for anyone who is not a '10,'" Schumer told Vanity Fair. "People were so mad about Lena [Dunham] taking her clothes off [on Girls]. There is like this weird anger towards women who feel comfortable in their own skin and aren't afraid to show it."

That kind of sexist, body-negative messaging is present in pop culture, when we talk about female stars' post-baby bodies or, conversely, direct approving nods toward men's "dad bods." The same intense objectification filters down to the guys hanging at a bar who deem passing women a "10" or a "4" with a scrutiny they never receive.

Letting go of pointless ideals: The episode also jabs at the dissonance between the unrealistic standards the media holds women's bodies to, and the types of "real women" — yes, with real personalities and flaws — that men end up having sex with, dating or marrying. That point is made clearly with the jurors who claim not to find Schumer hot, but also get an erection — a "reasonable chub" — when they watch her. Sexual attraction and real relationships often don't reflect the narrow lens of cultural beauty standards.

While the "12 Angry Men Inside Amy Schumer" is a cinematic homage, the scenario feels unsettlingly familiar for women who are subject to the court of public opinion every day. Schumer told Hitflix about the episode:

"Even though the characters are all exaggerated, they're not that much. It's one guy who projects a girl who rejected him onto you, and one guy who is into you but feels like it's not okay, and that he should like something else. It's all these things that actually exist."

While the absurdity and hypocrisy of the standards that men and media hold women's bodies to may be hilarious in a skit, they're all too real. The heinous crime is not that someone who looks like Schumer is on television, but that her appearance — and so many other women's — seem a more valuable topic of consideration than her talent, abilities and worth.

Watch a clip below: