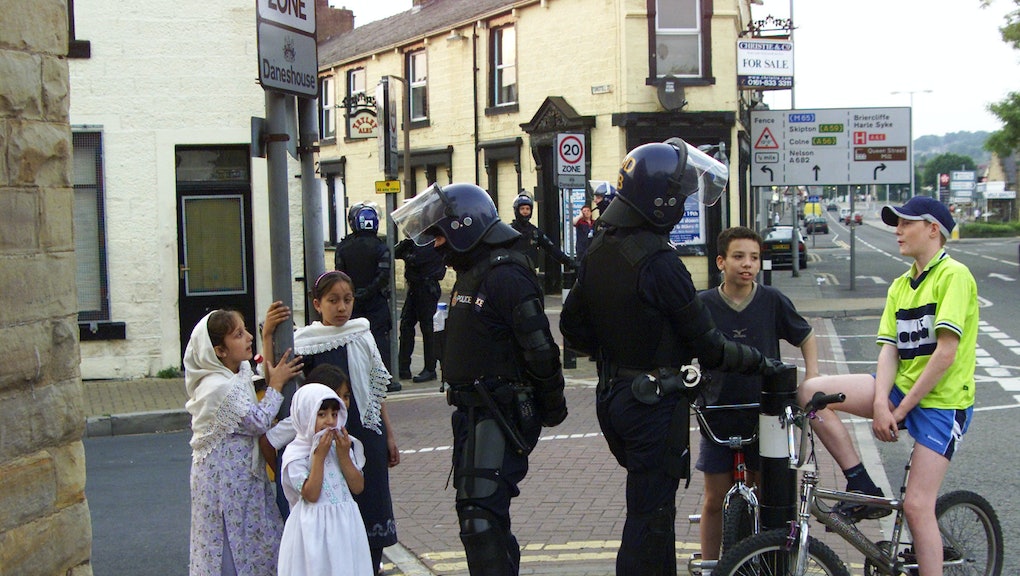 There are many ways to criticize America's police, but few are more popular than comparing them to police in other countries.

And check out these "bobbies" tasing the hell out of a guy holding a machete to his throat. American police would've just blown him away!

Foreign law enforcement officers — especially from Europe — are constantly applauded by critics in the U.S. as examples of "the right way" to do police work. But there's a problem with this narrative that most Americans don't see:

Police in Europe can be violently racist too.

The perception: As black people continue getting shot, choked and beaten to death by law enforcement across the U.S., it's easy to assume our country has a monopoly on state-sanctioned racial violence.

One factor that sets our men and women in blue apart is their troubling tendency to kill the people they're meant to serve and protect: According to the Economist, people in the U.S. are 100 times more likely to be shot by police than their British counterparts, while the Los Angeles Daily News reports that countries like Norway, Finland, Germany and the Netherlands saw police-involved death rates as much as 70 times lower than America's between 1996 and 2006.

Police in Iceland have killed just one person since 1944. American police killed 111 people in March alone.

Black people, Latinos and American Indians are all disproportionate victims of this pattern, but make no mistake — killing civilians is just one way to perpetuate racist law enforcement practices.

The reality: The Independent published Saturday the results of an investigation in which they found that more than 3,000 police officers in the U.K. are under investigation for assault. The majority of complainants are racial minorities — namely residents of African and Asian descent. In London, black and Asian people make up a third of the population, but 55% of alleged brutality victims. In the West Midlands region of the country, they make up 14% of the population but nearly half of brutality complainants, the report states.

Internal probes into these incidents remain ongoing across the U.K.'s 45 police forces. Meanwhile, 98% percent of the officers under investigation are still on active duty, with only 2% suspended or placed on restricted duty, according to the Independent investigation.

And this report is indicative of a broader international pattern. Just ask the black and brown residents of countries like France, where Muslims make up 7.5% of the general population but 60% of inmates locked up in French prisons. Or in England and Wales, where a greater proportion of black people are locked up in jails than in the U.S., according to a 2010 report.

Scotland Yard in London — home to the largest police force in the nation — was declared "institutionally racist" by its own Metropolitan Black Police Association in 2013, according to the Guardian. The allegations cited racial profiling as one of the core problems, with black youths up to six times more likely to be victims of "stop-and-search" policies than white youths.

Such practices — enabling police to stop and search anyone they want without probable cause — represent "an arbitrary and draconian power," letting them "abuse their position and, in many cases, inevitably stop and search innocent people," Imran Awan, deputy director of the Center for Applied Criminology at Birmingham City University in Birmingham, England, told Mic in an email.

"In the U.K.," Awan said, this fosters "a problematic relationship between the police and [black and minority ethnicity] communities ... In a study I conducted, which examined why the Muslim community did not see the police force as a 'professional' career, the people we interviewed cited 'stop and search' as one reason for their mistrust of the police."

Kojo Kyerewaa, coordinator of the London Campaign Against Police and State Violence, adds that, "What is clear to many people racialized as black in the U.K., is that the role of the police and the laws that they selectively enforce is to ensure the status quo that benefited from enslavement and colonialism is protected."

So hold your applause, America: The unequal treatment of black and brown people by police officers in majority-white countries is in no way unique to the U.S. In fact, it's a problem that plagues even those nations we uphold as models for how our own police officers should behave — nations like the U.K., which has a long history of anti-black and anti-Asian racism stemming from its colonial days in Africa, South Asia and the Americas.

Of course, countries like the U.K. earn points for being among the entire remainder of the developed world in the infrequency with which its police kill their own citizens compared to the U.S. — an example we'd do well to follow. But make no mistake, this is not just an American problem. It's a global one. And the racial power structure it reinforces is not drastically different in much of Europe than it is here.