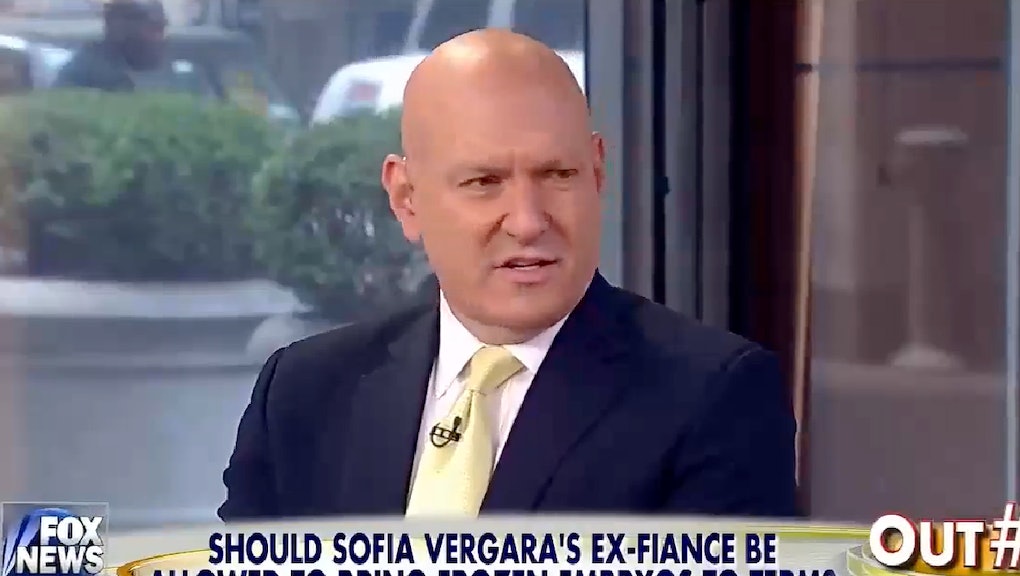 In 2 GIFs, Fox News Proves It Does Not Care About a Woman's Right to Choose

During his visit to Fox News' Outnumbered Tuesday, the channel's resident psychiatrist Dr. Keith Ablow had some interesting advice for women and who should be in charge of their bodies.

The discussion centered around the recent controversy surrounding Modern Family star Sophia Vergara's frozen embryos. Vergara has said she does not want them to come to term and to remain frozen indefinitely, while her ex-fiancé, Nick Loeb, loudly proclaimed their "right to live," in a controversial op-ed in the New York Times last week. According to Ablow, the matter doesn't rest with a woman's autonomy, but in a man's decision.

Ablow's defense of America's poor helpless men didn't stop there. He went on to give selfish abortion-seeking women a piece of his mind when it comes to their so-called "rights."

We've seen this before. The musings from Fox's resident "scientist" are only the latest in a string of inanity that Ablow has peddled on the station over the years. Speaking with Lou Dobbs on Fox Business in 2013, Ablow opined that President Barack Obama's seemingly pathological desire for gun control stemmed from lingering feelings of childhood abandonment.

There was also this memorable rant on FoxNews.com where the doctor denied the need for transgender rights because, like unicorns and Bigfoot, he was not convinced of their existence. "I don't believe we have definitive data that any male or female soul has ever in the history of the world been born into the wrong anatomic gender," he writes.

Unlike say, an obnoxious uncle at Thanksgiving, Ablow is a board-certified psychiatrist who has also served as an assistant professor at Tufts University. These are serious credentials from respectable institutions. More harmful still, Ablow can use his Fox News soapbox to regularly spout every utterly nonsensical or unscientific thought that pops into his head. Whether it's spouting willful ignorance or ideology masquerading as fact, Ablow's perch at the station is directly contrary to what should be a news organization's central purpose: to educate its audience.

But that's not likely to happen on Fox News, so shine on, Keith.