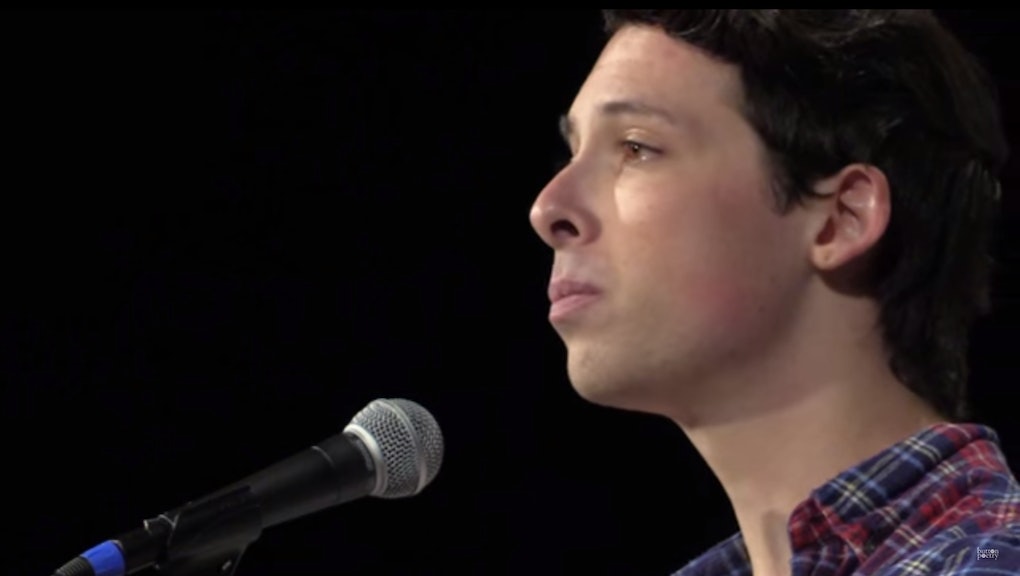 "No one comes running for young boys who cry rape."

In March, Kevin Kantor, a winner at this year's College Unions Poetry Slam Invitational, stood on a stage in front of thousands of strangers and described a uniquely horrifying experience: logging on to Facebook to find his rapist listed under the "People You May Know" section.

He described a process that most of us are familiar with — visiting someone's profile, browsing through their photos, spying on their friend list — only for Kantor, that someone was the man he said was responsible for his rape. "Now, I know the wolf's middle name, and what he listens to on Spotify," he said. "Sixty-four people liked the shirtless gym [picture]."

But despite his trauma, a substantial portion of Kantor's performance was devoted to a deeply troubling fact: His assault flew largely under the radar for those around him, including the police and even his own brother.

"No one comes running for young boys who cry rape," he said — a terrible yet largely true observation about the plight of men who experience sexual assault.

Kantor said both the police and his brother asked him why he didn't fight back, a question that ultimately places the brunt of the blame on the survivor. "When it happened, the feedback I was getting was, 'This can't happen to male-identifying people,'" he told BuzzFeed in an interview after his video went viral.

At first, he explained, he had trouble coming to terms with his assault because of his gender and the expectations that went along with it. "I still felt the word 'rape' didn't belong to me. I had trouble saying it, or when I said it it didn't fit right, because it was so ingrained that it wasn't something as a man I was supposed to talk about or admit to or succumb to," he said.

Male sexual assault, both male-on-male and female-on-male, has traditionally been a taboo topic. As Hanna Rosin reported for Slate in April 2014, even the FBI long neglected to track it. "For years, the FBI defined forcible rape, for data collecting purposes, as 'the carnal knowledge of a female forcibly and against her will,'" she wrote.

As Kantor saw, men are not supposed to find themselves in positions of weakness, particularly when it comes to sex. Ultimately, rape is about control, and the idea of a man having control ripped from him can be difficult for some to accept.

But it does happen. In her Slate piece, Rosin included data from the 2013 National Crime Victimization Survey, which reported that of 40,000 households that were polled on rape and sexual violence, 38% of assaults happened to men. It's even more common in the military: According to a 2012 report from the Department of Defense, in the 26,000 military reports of unwanted sexual contact, 53% had male victims.

"No one comes running for young boys who cry rape." —Kevin Kantor

For Kantor, his poems are his way of fighting back against the stigma of sexual assault. "When I told my brother, he also asked me why I didn't fight back," he said during his award-winning poem. "Adam, I am, right now. I promise."