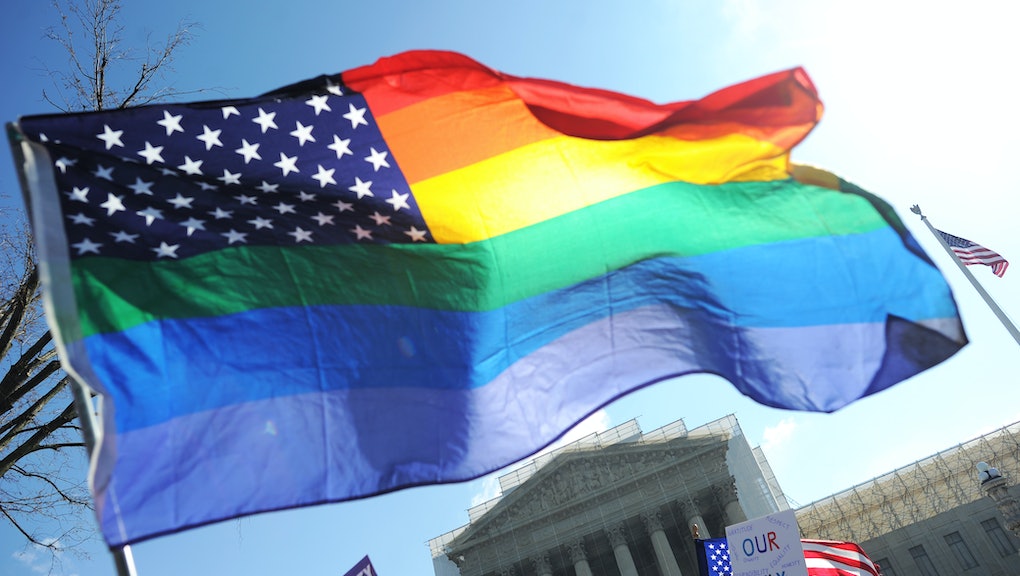 Americans Would Totally Vote for a Gay Presidential Candidate — At Least, Hypothetically

The American people have spoken: They're more than willing to vote for a presidential candidate who is black, a woman, even gay or lesbian. A Tea Party candidate? Not so much.

That's according to a new poll conducted by NBC and the Wall Street Journal, which asked 1,000 American adults whether they would be "enthusiastic about, " "comfortable with," "have some reservations about" or "be very uncomfortable with" voting for a presidential candidate with a series of qualities, ranging from a background in military service to being unaffiliated with a major party.

The most surprising implication of the poll, however, is the swift and sudden rise of the acceptability of hypothetical gay or lesbian candidates for high office. Sixty-one percent of those polled said they would either be enthusiastic about or comfortable with a gay or lesbian candidate, compared to only 37% saying they would have reservations or be uncomfortable, and 2% uncertain. This is an improvement from December 2006, when 53% said that they would be reluctant to support one.

As the prospects of (at this point, speculative) gay and lesbian candidates have risen, those of evangelical Christian and Tea Party candidates have stalled or stumbled. Fifty-two percent of those polled said they'd be at least comfortable with an evangelical Christian running for president, while 44% considered themselves hesitant, a statistical freeze-frame since January 2008. Voters express a greater skepticism of the idea of voting for a Tea Party conservative, with only 33% feeling comfortable with the idea.

It's a banner moment for gay and lesbian Americans — to a point. The poll's results indicate a positive social shift in favor of gays and lesbians, presumably the result of nearly a decade's worth of legal, legislative and cultural victories by the LGB rights movement (the poll didn't ask about the possibility of voting for a transgender candidate).

Bolstering this notion are the poll's findings on how people view society's acceptance of homosexuality. In March 2000, 42% of respondents to the same poll declared that society had "gone too far" in accepting homosexuality — in 2015, only 20% feel similarly, and 44% feel that society has not gone far enough in ending discrimination. Fifty-eight percent of those polled said that they would be in favor of the Supreme Court declaring same-sex marriage a constitutional right, with only 29% saying that they would "strongly oppose" such a ruling.

Regardless, it's still speculative. It's important to note that, at least as far as the response to hypothetical political candidates go, these results are speculative. There have been observed discrepancies between voter opinion polls on their views of minority candidates and the outcomes of subsequent elections since the 1980s (the so-called "Bradley Effect") whereby polls underreport hostility towards minority politicians or initiatives because those being polled don't want to come off as intolerant, even anonymously.

Political candidates are no exception: In a 2010 study conducted by New York University, polls on ballot initiatives on same-sex marriage were found to underestimate voter opposition to gay unions by roughly seven percentage points. For example, polling ahead of the 2008 California vote on Proposition 8 (which de-legalized same-sex unions that had been declared constitutional by the state's Supreme Court earlier that year) showed more opposition to the initiative than support for it. Despite those polls, Proposition 8 passed 52% to 48%.

Support means nothing without candidates to vote for. The field of qualified LGBT candidates for the White House is largely barren. Wide-stanced Idahoans aside, the United States has only ever elected one openly gay senator, and there are just six openly gay, lesbian or bisexual members of the House of Representatives (all of whom are Democrats). Oregon's current governor, Kate Brown, identifies as bisexual, but only ascended to the role after the Beaver State's previous chief executive resigned, and Brown has not yet declared whether she will seek reelection. WIth nary a single out cabinet member or member of Congressional leadership to choose from, America's open-minded approach to a hypothetical gay presidential candidate will likely remain just that: hypothetical.