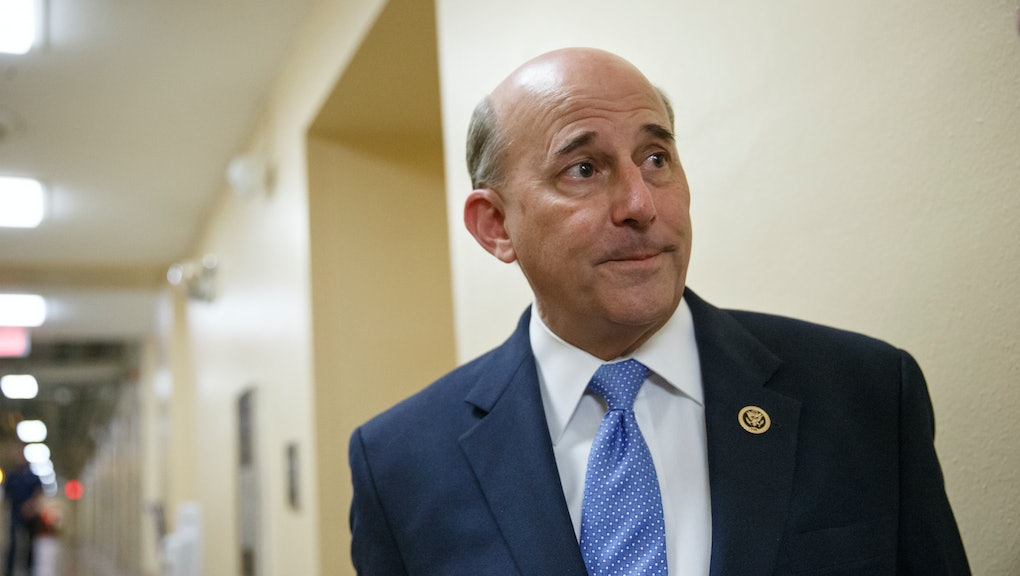 Conservative politicians saying wacky things is typically a steady source of harmless amusement, but this most recent episode appears to be getting out of hand.

Rep. Louie Gohmert (R-Texas) is the latest Republican to express concern that a planned U.S. military exercise in the Southwest known as "Jade Helm 15" may be a ploy for imposing martial law on Texas.

"This military practice has some concerned that the U.S. Army is preparing for modern-day martial law. Certainly I can understand these concerns," Gohmert said in a statement on the exercises. "When leaders within the current administration believe that major threats to the country include those who support the Constitution, are military veterans or even 'cling to guns or religion,' patriotic Americans have reason to be concerned."

Gohmert, who has served in the Army and has participated in military exercises, explained that he understands why a training exercise in civilian territory would be a routine occurrence and useful for the military. But he claims that a map depicting the operation's parameters that labels Texas "hostile" territory has stoked his deeper fears that the president could be using the operation as cover for something more sinister.

According to the Washington Post, which confirmed the map's legitimacy with Army sources, the map was likely made for local authorities, and the depiction of a domestic region as hostile territory is a regular feature of training exercises which — by definition — are simulating combat with an enemy.

On Tuesday, the Pentagon found itself in the unusual position of having to deny any military plot to take over Texas. "Jade Helm is a long-planned and -coordinated exercise," Col. Steve Warren, a Pentagon spokesman, told CNN. "We are not taking over anything."

Fuel to the fire: Conspiracy theories about the Obama administration's secret desire to destroy America are a dime a dozen on right-wing websites and online forums, but what's been striking about the Jade Helm flare-up has been how major Republican politicians from the state, including the governor, have treated them as worthy of serious consideration.

Texas' Republican Gov. Greg Abbott first lent legitimacy to the theory of a military takeover by instructing the Texas State Guard to monitor the operation. "It is important that Texans know their safety, constitutional rights, private property rights and civil liberties will not be infringed upon," Abbott said when announcing his action, according to NPR.

Presidential candidates have weighed in too. Instead of dismissing the hubbub as a fringe conspiracy theory, they've added fuel to the fire. Bloomberg reports that presidential candidate Sen. Ted Cruz (R-Texas) says he isn't surprised by the reaction to Jade Helm.

"I understand a lot of the concerns raised by a lot of citizens about Jade Helm," Cruz told Bloomberg at a convention in South Carolina. "It's a question I'm getting a lot, and I think part of the reason is we have seen, for six years, a federal government disrespecting the liberty of the citizens."

Cruz said he believes that it is just a military exercise, but that he needed to reach out to the Department of Defense to be sure of it.

"My office has reached out to the Pentagon to inquire about this exercise," he told Bloomberg. "We are assured it is a military training exercise. I have no reason to doubt those assurances, but I understand the reason for concern and uncertainty, because when the federal government has not demonstrated itself to be trustworthy in this administration, the natural consequence is that many citizens don't trust what it is saying."

Cruz's remarks are not an endorsement of the martial law conspiracy theory, but his extraordinary sympathy for its proponents and his claim that he needed to confirm it with the government amounts to a form of encouragement. Rather than reflexively dismissing the idea as ludicrous, he says that while the facts of this situation suggest the imposition of military rule in Texas isn't imminent, the possibility of it is not an unreasonable fear.

Somehow, former Texas Gov. Rick Perry has emerged as the voice of reason on the debate.

"You know, I think our military is quite trustworthy," Perry said, according to the Washington Post. "Civilian leadership – you can always question that, but not the men and women in uniform."

Perry's fellow Texan Republicans should take a cue from him — surely they know that fueling paranoia is bad for the entire country in the long run.