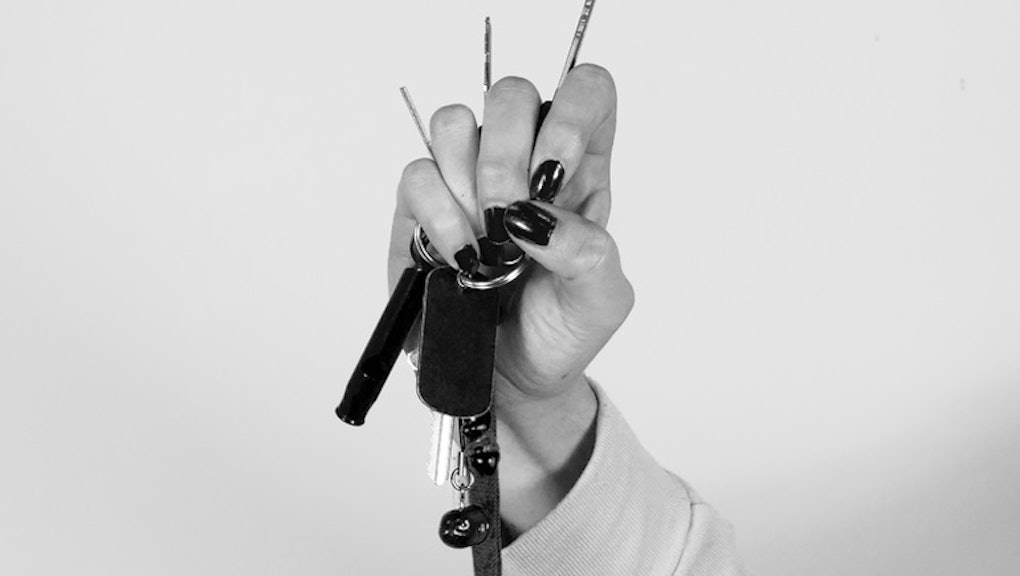 These Photos Show the Lengths Women Go to for Self-Defense

Most people are aware of the global gender pay gap, where men earn more, on average, than women for equal work. But there's another rarely discussed but pressing gender-based gap: the gender safety gap. It's a major problem that 22-year-old University of Iowa photography student Taylor Yocom is tackling in her bold photo series "Guarded."

The idea for the series emerged from Yocom's own experience. During a conversation with female classmates in February 2014, Yocom and the other female students began to pull out the various things they carried with them for self-defense, such Mace and rape whistles, the photographer told Mic.

"This was casual for us," Yocom wrote in an email. "The men in the room were taken aback that we even had to think of this! Seeing this gender divide sparked something in me."

Yocom and her peers are hardly the only women who feel they must remain on guard. According to a 2011 Gallup poll, 72% of men worldwide reported feeling safe walking alone at night, whereas just 62% of women did.

"Women still worry whether what they wear on any given day will get them assaulted in their own neighborhoods," Valerie Hudson, an expert on international security and foreign policy analysis at the Texas A&M Bush School of Government and Public Service, told Ms. magazine in April. "They must still worry when they get into a cab alone or when the repairman shows up at the door; they still cannot jog at night or go camping by themselves; they still give their date's phone number to a friend so the police will know who to investigate if their body shows up in a shallow grave somewhere."

Yocom was reminded of her own conversation about the gender safety gap when considering a class assignment to create a cohesive body of work months later. "Shooting the portraits of women holding what makes them feel safe on walks home made sense," she said.

After satisfying the assignment's requirements in April 2014, however, Yocom realized her work on this topic was not yet done: She moved the exhibit to a public location in October of that year and continued to photograph women with their self-defense devices.

Though Yocom said she learned a lot about the products women use to defend themselves — like the fact that Mace often comes in "feminine colors and patterns" to market it specifically to women — her goal is to move beyond the facts and figures of the gender safety gap and humanize the phenomenon.

"I want people to see this as a problem that affects actual individuals," she told Mic. "I want the Mace and rape whistles to be seen as the physical manifestation of the victim-blaming girls face all the time — and not just from assaults by strangers on walks home at night."

"Through 'Guarded,' I want the statistics to be seen as people, not numbers," Yocom said. And it seems the series does much to accomplish just that.