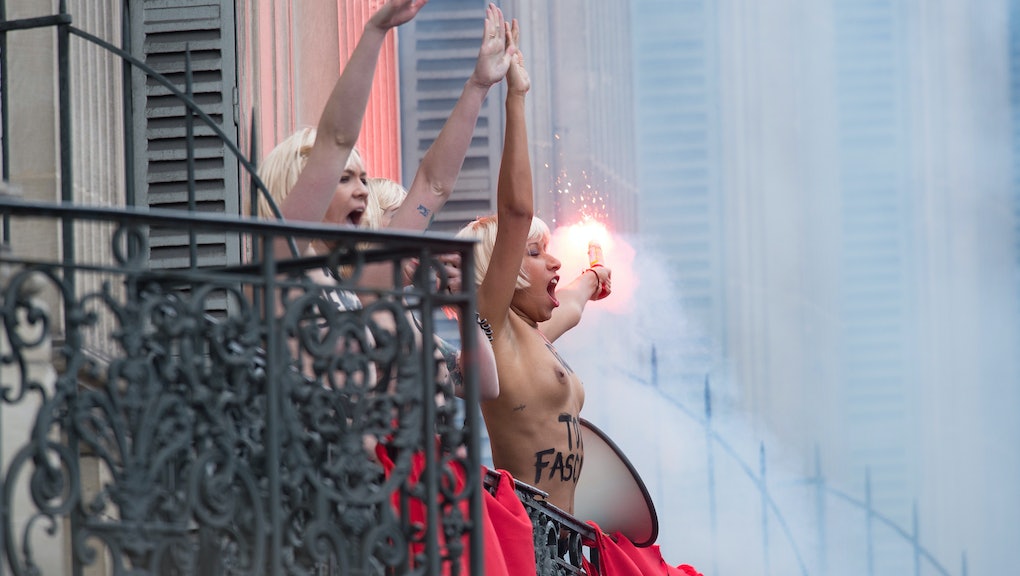 The 9 Most Important Feminist Hashtags of 2015 So Far

It's been a banner year for feminism, and it's only May.

Feminists around the globe have taken to social media to spread their word.They have gathered a notable following in the process, and have given a voice to many women who have previously been silenced — all with the power of the hashtag.

The movements have addressed rape, beauty standards, desexualizing women's bodies and combating sexism, to name a few. Here's a roundup of the most influential feminist hashtags being used in 2015 thus far.

Inspired by New York film of the same name, #FreeTheNipple encourages women to post pictures of their exposed nipples and endeavors to desexualize women's breasts. Women turned this into a global social media movement in pushback against how we hyper-sexualize females.

#FreeTheNipple ultimately allows women to reclaim their bodies as opposed to being objectified by a society which relentlessly sexualizes (and victimizes) women and imposes concomitant pressures.

Two mothers started this Instagram account in a similar effort to reclaim their bodies. Their tagline: "Two moms celebrating real women, real bodies and real self love." With #LoveYourLines, women show off their stretch marks to celebrate the changes women's bodies go through.

Started in 2012, Danielle Tansino's campaign and nonprofit of the same name gained momentum this year. Tansino started the hashtag after she was sexually assaulted while inebriated. Though Tansino wanted to press charges, her case never went to trial after a female district attorney said they wouldn't prosecute because jurors "don't like girls that drink," according to the organization's website.

Since gaining momentum this year, the campaign has been a crucial outlet for survivors who haven't been able to hold their attackers accountable, particularly for those who have been blamed for their assault because they'd been drinking, as well as a way for people to offer support.

#OlderWomenVoices targets those who often face underreported criticism and exclusion. "Seventy-one percent of women are worried about being forced out of their careers as they reach their 40s and 50s," found a pilot study on female ageism.

This kind of marginalization, which happens as early as middle age, compounds by the time women actually reach old age. #OlderWomenVoices is a way to push back against this societal double standard and allows older women to offer advice to younger people.

Five young Chinese women protested in the fight for gender equality, walking the streets in blood-spattered wedding gowns in March to draw attention to domestic violence, in just one example of their activism. Their arrests have sparked international outrage and led to the creation of #FreeTheFive. The hashtag had gained momentum on social media and in in-person protests, with an important message that quelling activism in the fight for equality will not go unnoticed.

"I think we can call them the first modern, independent, feminist, grassroots actors in Chinese history," a feminist Chinese blogger told the New York Times.

Young adult fiction author Courtney Summers dedicated April 14 to reaching out to young women and girls online to let them know they're not alone, their voices are heard and women are just as powerful as men. Young girls are an easy demographic to marginalize and often suffer from low self-esteem, which only makes this kind of outreach more important.

This initiative for women around the world to share their experiences with everyday sexism has revealed just how pervasive it is, manifesting itself in even the smallest ways. It's been an important way for women to hold society accountable for the daily sexism they encounter.

While this was started in response to the lack of diversity in Oscar nominations (and, more generally, Hollywood), feminists have used this hashtag to draw attention to the marginalization of women of color.

Many have argued that the latest iteration of feminism is a white-centric one, which excludes the experience of the struggle of women from different races. This movement advocates for women to have a voice and to push for the inclusion of female ethnic minorities in entertainment.

"Rape culture theory is doing little to help victims, but its power to poison the minds of young women and lead to hostile environments for innocent males is immense," Caroline Kitchens of the right-wing think tank the American Enterprise Institute wrote in Time magazine in 2014.

In response to this and a wave of other writers and thinkers acting as sexual assault victim-blamers, millions of women took to the Twittersphere to hold these people accountable. Spreading the message that sexual assault is a rampant problem and women are not responsible for their assaults is absolutely imperative. This hashtag does both.

For all the ills facilitated by social media, like online bullying and trolling, these are nine powerful arguments for how positive and impactful such platforms can be. Connecting survivors of sexual assault, who so often shut themselves off out of shame and fear, has been tremendously empowering. Coupled with other equality campaigns that help women reclaim their bodies, fight ageism or support global social activism truly makes this one of the best times in history to be a feminist.