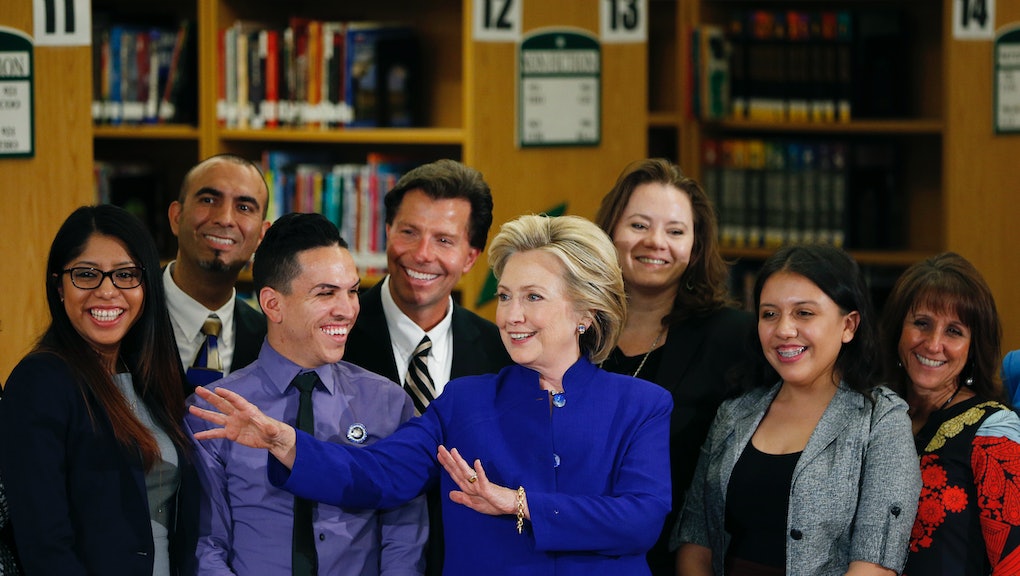 In the years after World War II, the U.S. military tested atomic bombs in the Nevada desert. On Tuesday, Democratic presidential favorite Hillary Clinton arrived in Las Vegas and promptly went nuclear on the question of immigration reform.

Speaking at Rancho High School, where about 70% of the student body identifies as Latino, Clinton promised to expand President Barack Obama's executive actions if Congress failed to pass comprehensive reform with "a full and equal path to citizenship." She then proceeded to call out Republicans who have danced around the issue or retreated from substantive legislation in order to avoid riling the party's conservative base.

"Today, not a single Republican candidate, announced or potential, is clearly consistent in supporting a path to citizenship," Clinton said, with an eye on former Florida Gov. Jeb Bush and Sen. Marco Rubio (Fla.). "When they talk about 'legal status,' that is code for second-class status."

Words matter: There are two distinct schools of thought on how Clinton has gone about crafting her political positions in this early part of the 2016 race. The first holds that she is a wily liberal who is finally showing her true colors and that pressure from the left — in the form of Sen. Elizabeth Warren's every utterance — is overstated. The other is less sympathetic and more familiar: It paints Clinton as a calculating moderate, willing to do now what she must in order to choke off progressive support for potential primary rivals.

But this has quickly become a distinction with no meaningful difference. In political campaigns, words matter. Whether Clinton has these written on her heart or simply sees the message as expedient, she is pointedly attaching her name to arguments traditionally viewed as the province of the Democratic Party's lefty fringe.

For supporters of immigration reform, Clinton's comments in Las Vegas are her bond. If the candidate is as shrewd as many suggest, she knows that walking away from them a year from now would shred her growing coalition.

Cornering the GOP: Clinton also has Republicans to thank for making her path forward so clear and electorally irresistible. Campaigning against her, even with their own contest still in the balance, has proven popular among the GOP frontrunners. Rubio described Clinton as "yesterday's candidate" during his lauded entry into the race. Bush's team sent an email to supporters on Sunday asking if they were "committed to stopping Hillary."

More importantly, both have positioned themselves as friendly to the idea of reform without embracing any substantive means of achieving it.

With her comments in Las Vegas, Clinton delivered a swift and perfectly aimed counterpunch to Rubio and Bush's repeated jabs. Now, they will be forced not only to compete with one another, but also present a distinct argument from the Democrat they have set up as a ideological foil. Given that, any full-throated rejection of Clinton's stated principles would birth increasingly powerful enemies in the immigrant community. At the same time, future comments resembling a compromise with Clinton's support for, say, "state policies to provide driver's licenses to undocumented immigrants," as she said yesterday, would kick off an intra-party rebellion.

The fight: Election Day in 2016 is still 18 months out. Clinton has maneuvered wisely, but she is far from lining up a checkmate. The more interesting development today is the speedy evolution of the terms of debate — with her aggressive comments on Wednesday in Las Vegas, Clinton, the best known American politician outside the White House, has made immigration reform a political imperative.

The fight to achieve it is now her own.