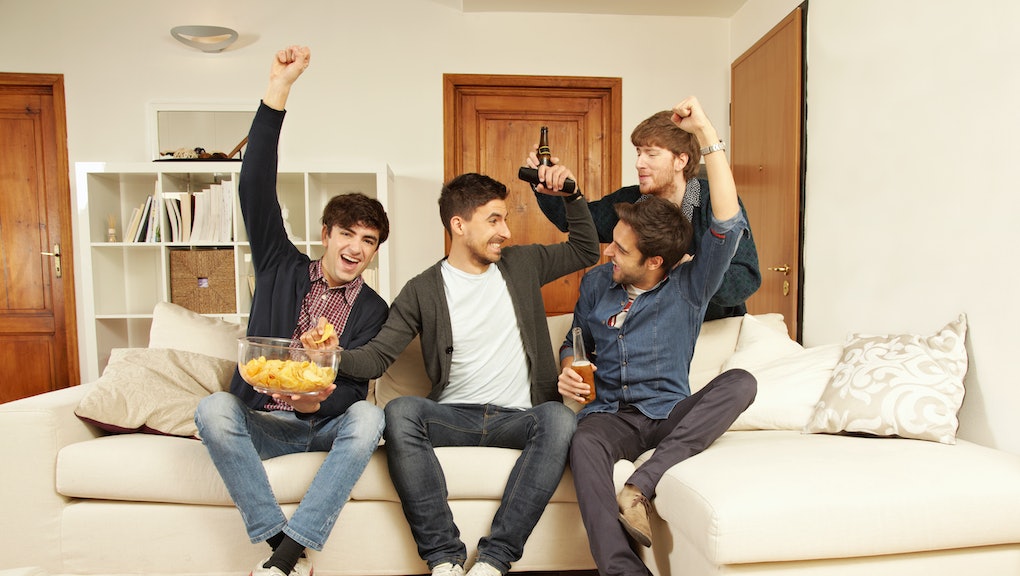 "I remember telling a joke and having this woman shut down on me, like I was trying to sleep with her. I just wanted to have fun and talk to someone."

Because of his part-time job doing standup comedy, Shawn*, 27 and single, spends a lot of time socializing at bars. Consequently, he often finds himself talking to women without any intention other than to pass the time pleasantly. "I would be in bars and I was just trying to be fun, and it was assumed that every thing I tried to do was in a certain context."

Like Shawn, many men find themselves miscast and prejudged based on stereotypes — stereotypes which, unfortunately, aren't unfounded. Thanks to social media, viral videos and national treasures like Amy Schumer, the worst of sexist male behavior is more exposed than ever: catcalling, online harassing, slut-shaming.

Calling attention to the crap women face all too regularly, especially in the dating world, is crucial for changing society's norms. But there are men who'd like to get in on that dialogue, not only to express support as self-declared feminists, but also to offer up perspectives that help cut through gender stereotypes on both sides so we can better understand each other. As Ezra, 33, told Mic, "Men are subject to a whole different set of stereotypes as women are. I just wish we could respond."

So Mic asked more than a dozen straight guys what they wish women knew — about their insecurities, their worries and, yes, what they're looking for out in the dating world. They don't speak for all men, of course. But being open and honest, just a few people at a time, is a great place to start.

We're not always thinking about sex.

"Women assume men just want to bed them. That isn't true. Much of the time men want to bed women in order to see whether they might enjoy it enough to continue bedding that woman for years to come." — Jake, 29

"I don't befriend women I just want to have sex with. Male-female friendships are way more nuanced than that. I just want to meet new people and make new friends. They help you gain new experiences, new perspectives, but that's all I want. Nothing more." — Mike, 23

"Men can befriend women just for the sake of being friends with them. I don't need to be interested that way. It's constantly something I think about too. There's this expectation thrust upon men to have sex with them, but that's not necessarily true." — Ezra, 33

We're not actually all after one body type.

"There are guys that want every body type, just like there are women who do too. Give us a bit more credit. Different people are attracted to different types of women." — Damien, 26

"There's pressure on men to have a body type [preference], even if it's not the same expectation on women. Women seem to be more accepting. There are also guys that love every type of woman. There are guys that prefer every body type." — Jackson, 27

We're self-conscious of our looks too.

"Guys care more about their bodies today than they used to. We know girls care about whether we're in shape or not. Some guys think about what they eat or what they're wearing. We need to look good now more than ever." — Patrick, 29

"Not everyone goes as HAM as everyone else, but regardless of who it is, everyone puts some effort into their appearance." — Ted, 26

We feel judged for our earning potential.

"A lot of women immediately look to what a guy does and how much they make, and it's all superficial. It's no better than when a guy says 'I'll only date a girl with a certain type of body.' It's judging someone based on only one thing." — Paul, 26

"[I feel like some] women care about how much money you make. Having money makes life easier. It would be smart to want your life to be easier." — Shawn, 27

Oh, and for not conforming to masculine gender roles.

"Men are often being judged through the same types of stereotypes women hate to be seen through as well. We're told to 'man up' or stop 'living that bachelor lifestyle.' Stereotypes can be just as harmful for men. This 'man-up' culture is part of the reason people think men can't emote." — Ezra, 33

"If a man is emotional, it can be interpreted as lack of confidence, and that's not what you want. Women love confidence." —David, 25

Men have emotions too — especially nerves.

"When I have a date, my day can be ruined. It'd be hard for me to work, always jittery. The past year it's been less so. I'm going to drink tonight before my date, because it'll open me up more. It's a form of being guarded. " — Paul, 26

"I get nervous before dates or meeting women. I am concerned about how I appear, or did I say the right thing. It's completely natural. We have this awful stereotype that showing vulnerability or insecurity is not okay. Just because on the outside I'm stoic doesn't mean we're not really nervous on the inside." — Ezra, 33

"This week I cooked dinner for my wife [and] I was so anxious for my wife's approval. Some of the most nervous I've ever been has been before our dates." — Bill, 26

"When you really like someone, you are nervous about doing something to mess it up or turn them away." — Jake, 29

We don't actually care about your "number."

"I've had numerous sex partners. Why would I care if the other person did? Personally, I need someone who can handle my moves." — Ted, 27

We don't mind if you try to pay on a date, but know that you don't have to.

"I've been on plenty of dates where women offer to pay. You just don't want it to be held against you. In fact, it's great when a girl says, 'We both have jobs' or 'I can't let you pay for all of this, you've already spent so much.'" — Jacob, 24

"I don't mind paying at all if we're having an enjoyable time. There's no owing for me paying for a date. All I want is to make it comfortable and enjoyable. And just because a girl lets me pay doesn't mean I expect sex." — Shawn, 27

And yes, we're totally down to see superhero movies with female leads.

* All names have been changed to allow individuals to speak openly on private matters.