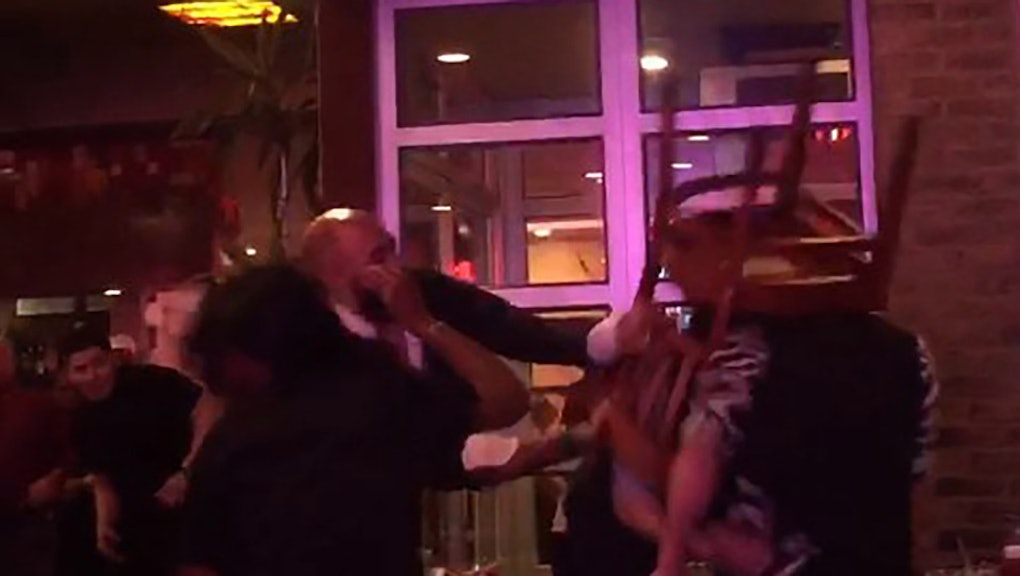 Friends of two gay men who were the victims of a vicious assault at a New York Dallas BBQ restaurant Wednesday night are asking for help identifying the homophobic assailants responsible.

The assault, which took place in the Chelsea neighborhood of Manhattan, was caught on video and uploaded to Instagram. The video captures the moment when one of the assailants chose to smash a wooden chair on the two patrons' heads. The attacker seen in the video matches the description police gave to Mashable of "a 35-year-old, 6-foot, 4-inch black male."

The video was initially posted to Instagram, but was later taken down. It had a caption reading:

"Watch !!!! Child, next to my table a fight in bbqs, and a man cracks a chair over someone's head and then runs out smh, as I waited on my chicken and shrimp combo and frozen apple tini #cincodemayo"

The full video, showing the moments leading up to and following the chair hit, was posted on YouTube as well.

"These guys attacked us specifically because they knew we weren't their type of people," victim Jonathan Snipes, whose boyfriend Ethan York-Adams was also attacked, told DNA Info, insinuating it was a hate crime. "It was disgusting. It was awful."

According to DNAinfo New York, the incident started at around 11:00 p.m. at the restaurant as the two were wrapping up their Cinco de Mayo drinks. Snipes received a text about a death in the family and knocked over a drink on his way out of the establishment. At that point, things started getting pretty ugly.

"A table near us audibly started making pretty gross comments about the two of us like, 'White faggots, spilling drinks,'" Snipes told the DNAinfo. "I don't let anyone talk to me like that. I went over there and asked, 'What did you say about us?'"

At that point, one man who was seated at the table began attacking Snipes, knocking him to the ground and kicking out one of his teeth. Another patron from the group attacked the two with the chair as they attempted to escape. Both men refused medical attention at the scene because Snipes is recently unemployed and lacks health insurance. The assailants escaped the scene of the crime before police arrived.

According to the Southern Poverty Law Center, national hate crime statistics compiled by the FBI are notoriously spotty, but what is available indicates, "LGBT people are far more likely than any other minority group in the United States to be victimized by violent hate crime." They are also becoming either more common or more commonly reported. The number of anti-LGBT hate crimes being investigated by the NYPD on an annual basis has risen in recent years, which according to RT, mirrors a small national uptick in the number of such attacks reported to the FBI between the years 1996 to 2011.

The identities of the attackers responsible for Snipes and York-Adams' awful beating are as of yet unknown. The one bright spot is that this awful story still has the potential to go viral, increasing the odds that whoever those two hateful people are, they will be arrested and forced to explain themselves to a judge.