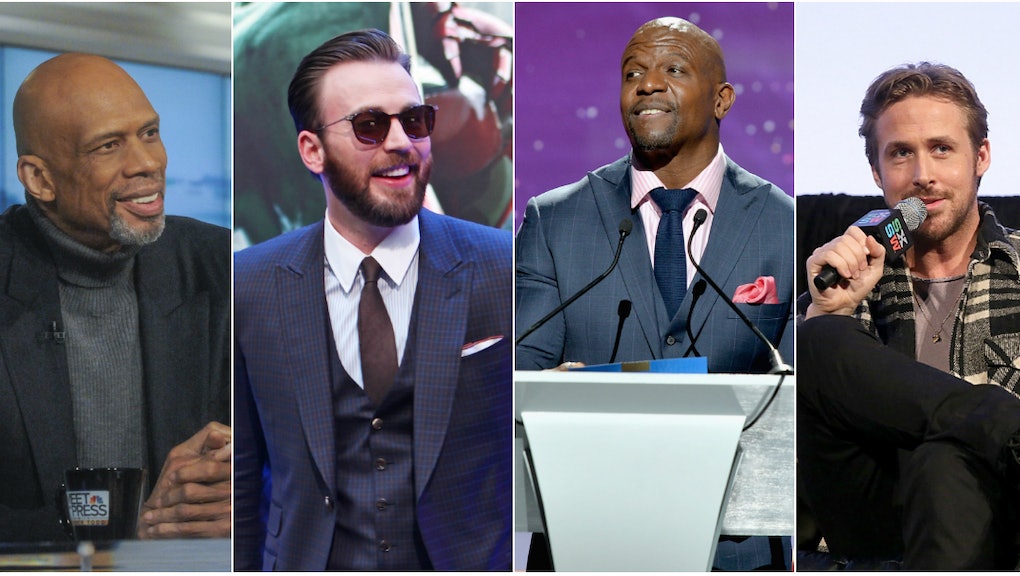 11 Male Celebrities With Sex Advice All Men Need to Hear

It's a scene we know all too well: A woman, seeking to impress a new boyfriend, surrounds herself with magazines preaching the hottest ways to turn him on — "8 Positions to Drive Him Wild!" and "Naughty Sex Tips!" and, of course, "His Ultimate Sexual Fantasy!" The unequivocal takeaway: Women should be the ones figuring out how to make sex great by pleasing men.

Except, well, that's only half the story. While women mull porn-style acrobatics and applause-worthy blow jobs, we're missing an important thing that can make sex great for men: Making sure women are enjoying it as much as they are.

Despite the well-known orgasm gap, a 2010 study in the journal Personality and Individual Differences found that 90% of men say they do care if their partner gets off. And that intention matters: The more a man is invested in his partner's pleasure, the narrower that gap becomes. Great sex, in short, means it's great for both people involved.

Thankfully, these 11 kickass men aren't shy about speaking up for what men should really be looking for when it comes to awesome sex.

Stamos said what every woman wants to hear while describing his sex life in Ali Adler's book How To F*ck a Woman. You have to love a guy who is comfortable talking about exploring what feels good and freely admitting his partner's pleasure is as important as his own.

2. Jamie Bell: "A man should have a good understanding of a vagina."

Bell cut right to the chase when GQ U.K. magazine asked the actor what skill every man should have. With so many men admitting how little they actually know about the female anatomy, his answer is especially significant: Knowing what's going on down there is crucial for knowing how to provide pleasure.

3. Chris Evans: "Listen to her instead of trying to impress her."

Evans, feminist superhero? Not only did the actor tell Metro that it shouldn't matter how many sexual partners a woman has had, as he revealed to Cosmopolitan U.K., he's learned the most about how to treat women from his mom.

4. Ashton Kutcher: "Start opening up a conversation where women are empowered with their own sexual experiences."

Was the importance of women's orgasms taught in your sex ed class? Probably not, Kutcher pointed out during a press conference in 2011 for his movie No Strings Attached. But that's exactly when young people need to learn to appreciate female pleasure, and women especially benefit from feeling empowered in their sexuality.

Crews, the NFL player-turned-actor-turned-feminist author, took an unexpectedly progressive view of masculinity in his book Manhood: How to be a Better Man (Or Just Live With One). In an interview with eHarmony, Crews said learning to see women as more than sexual objects was a game-changer for his relationship, and for his view of women broadly.

6. Ryan Gosling: "[Never] control a woman's sexual presentation of self."

After the MPAA, aka the ratings lords, slapped Blue Valentine with a NC-17 rating (ostensibly because of a scene in which Gosling's character performs oral sex on his wife), Gosling released a statement criticizing the "patriarchy-dominant society" that limits expressions of female sexuality. Hey girl, indeed.

7. Russell Brand: "You've got to make sure that everyone is happy."

Ladies first? When it comes to activities between the sheets, experts urge men to help their partner orgasm first — and Brand agrees. During an appearance on HuffPost Live, Brand maintained that guys should take pride in satisfying women. Here, here!

Discovering what turns a woman on doesn't have to be a mystery — just use your words, the NBA legend advised in his "Guide to Understanding Women" featured in Esquire. The sexist idea that women are enigmatic beings that men must "figure out" turns them into objects, not human beings with valid viewpoints.

9. James Deen: "You need to figure out what they're into."

Quite simply, sex between two people who both want the other to have a great time is awesome. In fact, it's one of the things George Carlin told Esquire in 2008 he's learned in his life — something we'd all be better off remembering as we experiment and explore.

Every comedian has contributed their two cents to the idea that "men are from Mars, women are from Venus," but Louis C.K. steered the conversation into feminist territory during his HBO special Live at the Beacon Theater. The comedian took aim at men's belief that women don't have as much sexual desire as they do and prefer mere affection, pointing out that it's probably men's lack of attentiveness that's giving them that idea.

Women, in fact, do want something more than cuddling. Great sex for both men and women means paying attention to what that is.