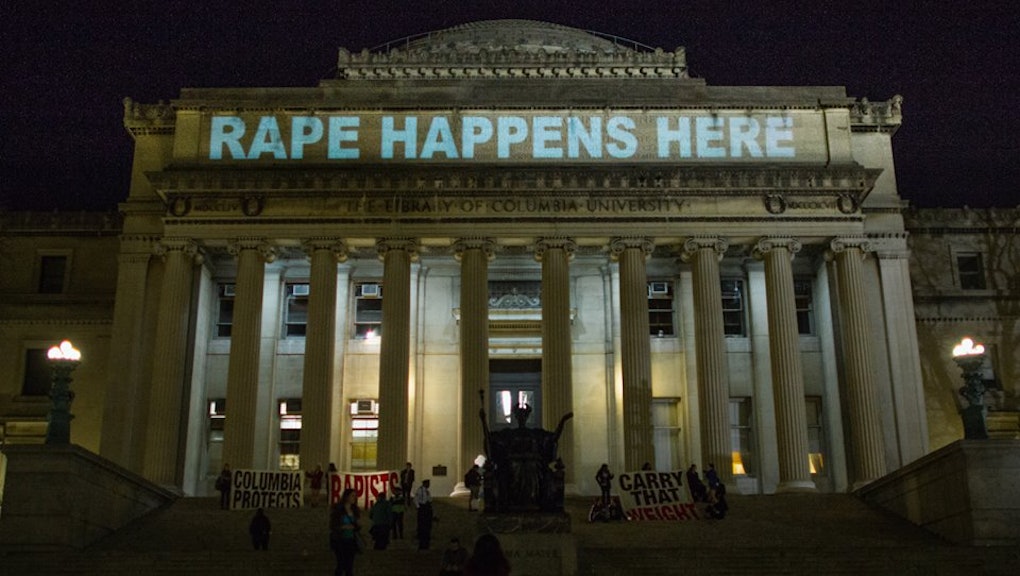 Sexual Violence Complaints on Campus Have Increased 1,000% — But That's a Good Thing

A recent report indicates the growing conversation around campus sexual assault may not only be empowering survivors to come forward but forcing colleges to address the issue.

A group of Senate Democrats released data Tuesday gathered by the U.S. Department of Education's Office for Civil Rights revealing sexual violence complaints on campus increased more than 1,000% between 2009 and 2014. The data was released in response to a call for greater transparency surrounding sexual violence complaints at colleges and universities, according to U.S. News & World Report.

The jarring number: While initially this shocking finding seems to indicate sexual violence is on the rise on campuses, it's unlikely that rates themselves have changed, but rather that survivors are better educated about their rights and empowered enough to speak out and pursue action against their perpetrators. As Alison Kiss, executive director of the Clery Center for Security on Campus, told the Huffington Post last October, higher numbers of crime reports for sexual violence indicate that campuses are "breaking that culture of silence."

Considering that as many as 1 in 5 women will experience attempted or completed rape while at college, a report of zero sexual assault complaints is a major red flag.

"When you have zero reported instances of sexual assault, we know that statistically it's impossible," Annie Clark, cofounder of End Rape on Campus, told Bustle in March. "The institution is covering it up by using terms like 'non-consensual sex' or 'sexual misconduct.' This way it's not a crime, it's a infraction, and they don't have to report it." The rise in reports, therefore, may indicate campuses and students are adapting to better approach the issue.

On Capitol Hill: But the issue of campus sexual assault goes all the way up to the federal level. The Department of Education also reported the average time the Office for Civil Rights took to investigate sexual assault cases that resulted in "substantive closures" — as opposed to no violation or a lack of sufficient evidence — tripled over this five-year period, according to U.S. News & World Report.

This lag in response is likely due to an underfunded and understaffed Department of Education — a point Sens. Claire McCaskill (D-Mo.) and Kirsten Gillibrand (D-N.Y.) addressed last year when they called for more than $100 million in funding for the department. In fact Gillibrand, who was also a member of the group of senators who pushed for the data released Tuesday, said this finding underscores her previous request.

"This data is the latest example of why we need to flip the incentives so that schools properly address the problem of sexual assault on their campuses, and make sure the Department of Education has the funding it needs to enforce the laws, review complaints and help prevent campus sexual assault," Gillibrand said in a statement.