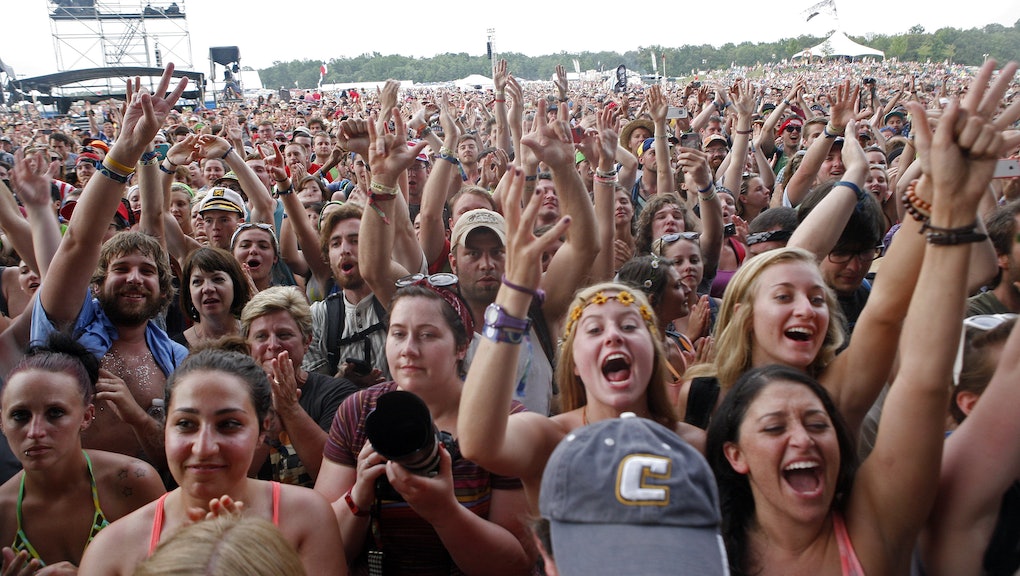 When people talk about the history of music, rock 'n' roll is always the hero. But a study from the University of London, Imperial College London and Last.fm, published Wednesday in the Royal Society Open Science journal, has revealed that rock 'n' roll isn't all it's cracked up to be.

In the last half-century, hip-hop has actually proven to be the most influential genre in popular music. And yet its artists' musical achievements are still some of the most underrated. Perhaps that won't be the case much longer. Watch the throne:

The study: Researchers used the tools of evolutionary biology to analyze the musical characteristics of 17,904 songs released between 1960 and 2010 that charted on the Billboard Hot 100. They found that the development of new sounds and genres progressed at a fairly even pace, save for three distinct periods of rapid growth.

The first came in 1964, around the time of the British Invasion, when the Beatles, the Who and the Rolling Stones all burst on the American scene. The second came in the 1983 with the heyday of new wave and disco. And the third and the largest came in 1991 with the rise of hip-hop. But these three scenes were not created equal.

The study's authors found that the hip-hop moment marked an explosion of new sounds, styles and tonalities that caused it to become most dominant and influential genre in the years that followed. The results were so astounding it led the study's authors to conclude: "The rise of rap and related genres appears, then, to be the single most important event that has shaped the musical structure of the American charts in the period that we studied."

The Beatles weren't so big after all. The findings surprised the study's authors. "Being a victim of boomer ideology, I would have guessed it was 1964," Imperial College London's Armand Leroi, one of the study's authors, told the Los Angeles Times.

Looking closely at 1960s, though, the study's authors also found that the Beatles' arrival in the U.S. might not be as dramatic of a moment in rock history as many make it out to be. According to their analysis, the "evolutionary trajectories" of classic rock "were all established before 1964," the authors wrote, "implying that, whereas the British may have contributed to this revolution, they could not have been entirely responsible for it."

"They were good-looking boys with great haircuts and British accents but as far as their music was concerned they weren't anything new," Leroi told Telegraph U.K.

Maybe Complex's assertion that "Migos Are Better Than the Beatles" holds some weight after all.

A bold claim: The study's results will likely be very unpopular with all those who claim the Beatles are the pinnacle of musical innovation, or that instrumental musicianship is a necessary feature of musical genius. But part of the beauty of this study is that it does away with biases in this regard.

"We can actually go beyond what music experts tell us, or what we know ourselves about them, by looking directly into the songs, measuring their makeup, and understanding how they have changed," lead author Matthias Mauch said, according to Billboard.

And while the Beatles don't need any more recognition, hip-hop artists still do. Many of hip-hop's legendary founders are still often overlooked by our country's most pre-eminent artistic institutions, such as the Library of Congress. And the Grammy Awards have still never awarded either of its top prizes — song of the year or record of the year — to a hip-hop record. Its sampling is still considered as "stealing" by many, rather than being a legitimate form of creativity not unlike, as producer Mark Ronson told NPR, what "the Stones and the Beatles and Eric Clapton did with the Delta blues to make their own music."

"If you really manage to be influenced or borrow or copy without making it a carbon copy ... It does sound like nothing else that came before."

This new data speaks more than any critic ever could. Hip-hop has changed American music more than any other genre in the past half-century years. And it's about time we recognized it.