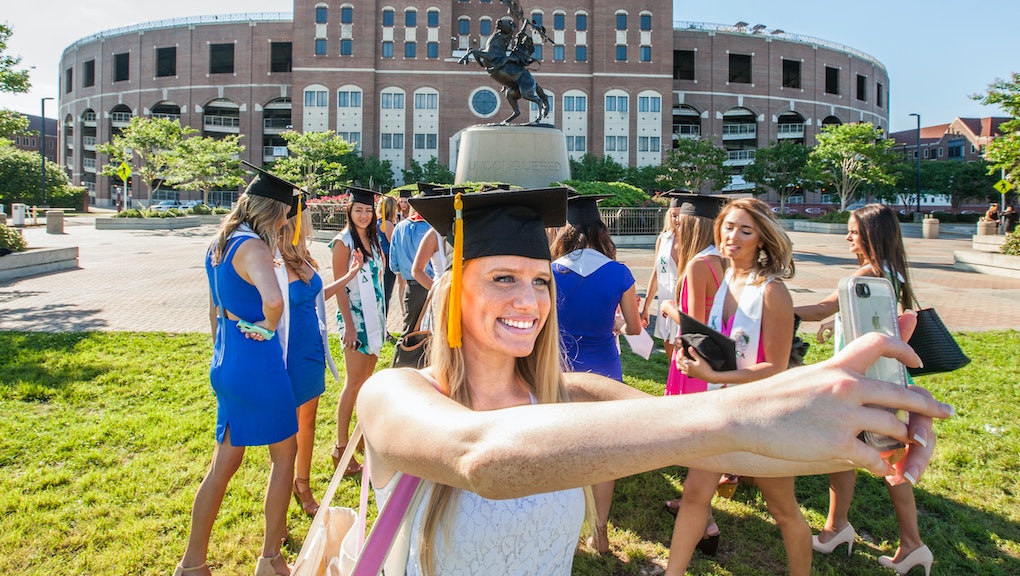 It's Official: The Class of 2015 Has the Most Student Loan Debt in History

It's May, and college students across the country will soon be subjected to lofty commencement speeches about their ability to achieve historic accomplishments. But new data suggests that they already have.

The class of 2015 is the most indebted class in American history, according to a new analysis by Mark Kantrowitz, senior vice president and publisher of Edvisors, who shared his findings with Mic. The analysis is based on data from the National Postsecondary Student Aid Study, which was conducted by the U.S. Department of Education.

The average student who borrowed money for their bachelor's degree will be over $35,000 in debt — $2,000 more than the previous year, and roughly $15,000 more than just 10 years ago. Even when adjusted for inflation, debt per borrower has more than doubled since the early '90s.

As you can see, students have borrowed more in order to pay for their degree each year at a fairly steady clip:

Running alongside that trend has been a consistent rise in the percentage of students who have had to borrow money to pay the cost of a degree. According to Kantrowitz's analysis, nearly 71% of the class of 2015 has had to borrow money in order to pay off their degrees. Twenty years ago, a majority of students didn't need to take out any loans at all.

The total sum of the debt is stunning. The class of 2015 will graduate with a total of about $56 billion in public and private loans, a more than fivefold increase since the 1990s:

"Student loan debt at graduation increases by $1,000 to $2,000 per year because of a failure of federal and state government grants to keep pace with increases in college costs," Kantrowitz told Mic. "This shifts the burden of paying for college from the government to the families. Since family income is flat, students have two choices: One is to graduate with thousands of dollars of additional debt. The other is to shift enrollment to a lower-cost college."

What it means: These trends are not without consequence. More student debt reshapes the way recent graduates perceive everything from what kind of job they should seek out to whether they should invest in a house. The prospect of a life of repayment will make graduates more hesitant about more expensive lines of specialized study. It makes people less inclined to take less lucrative jobs that they may be more passionate about or consider better for society. It makes people less able to make major investments, like buying a home, that are central to the economy's health.

If the funding model for higher education doesn't undergo serious changes soon, we can only expect to see more people shackled by the very experience they sought out to make their lives better.

In the meantime, happy graduation!