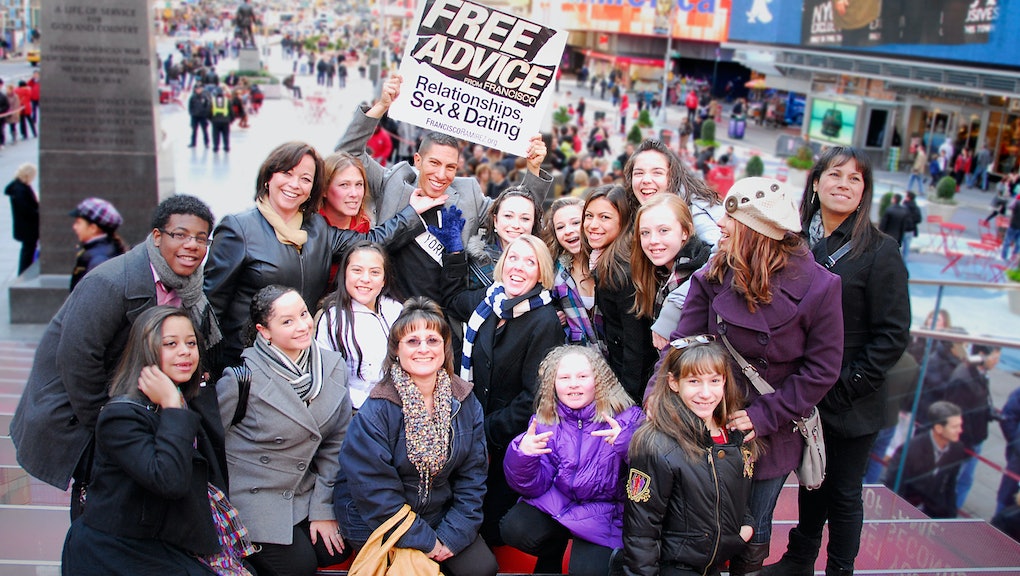 Would you go up to a stranger in the park and ask them about your deepest, most personal problems?

Francisco Ramirez hopes so. Since 2008, the licensed sexual health educator has put up a sign that says "Free Advice on Relationships, Sex & Dating" in parks, streets and subway platforms around New York City. About once a week, New Yorkers from all walks of life probe Ramirez about everything from how to ask someone out on a date to the best way to have sex in public spaces.

"I started because I felt like the sexuality education that we give each other in schools and other places is just not enough," Ramirez told Mic. With a masters in public health from Columbia University and a resume that includes the United Nations, Planned Parenthood and Durex, Ramirez is especially equipped to offer his brand of #FreeSexAdvice to anyone who needs it. And plenty of us do, too embarrassed to ask our friends or even our doctors about the most important topics (and then, of course, we often turn to Google instead).

Mic spoke with Ramirez about his radically different approach to sex advice, the most mind-boggling questions he's been asked — and the worries we all have about sex.

Mic: What types of people approach you on the street and say to themselves, "Hey, sure, I'm going to go ask that strange guy for advice?"

Francisco Ramirez: It varies more than most people would think. I do see a lot of people ages 16 to 20, but only slightly. I see lots of homeless people of all generations. I see a lot of families or people bringing their children. I see a lot of intergenerational couples. People with lots of resources stop by. A millionaire philanthropist stopped by five days ago — followed by someone who had been living homeless for the last two years.

It's really across the board, and that's one of the things that keeps me going at it because discussions around sexuality are a common denominator for so many people.

You're sitting across from each other, looking into each other's eyes — How personal are these questions getting?

FR: Oddly enough, very comfortable. Particularly the number of grown-ass men that sit down and share something that they'd never shared with anyone before. Face-to-face is a different kind of interface, but people are still comfortable. ... It's about humans' ability to drop pretenses and kind of take risks. The risk people take going up to a stranger, the risk they take revealing to themselves the question they had.

A lot of times people don't know what the question is until they sit down and I pull [it] out of them.

What are some of the most memorable questions you've ever been asked?

Then there was a couple who wanted to know about cooking with bodily fluids, specifically semen. That was a memorable question because they were really into it. It was sort of a bonding experience for them.

There was a regularly a priest who was coming by to ask about sexual activity, specifically things that he maybe shouldn't be doing as a priest. I'm not talking about assault, but other sort of sex acts that maybe he's maybe not supposed to be doing. That went on for a while. I do have a number of repeat folks.

I have to say, I really love when parents bring their kids, and then the parents are schooled on how to be good parents when it comes to sex talks. That happens a lot.

Have you seen the questions change in the seven years, with the advent of Tinder and hookup apps that weren't present in 2008?

FR: The good news in how the questions have changed is that in some ways, we are becoming more inclusive. I have been doing Free Sex Advice for seven years, and I've been doing sexuality education for 17. Certainly if I say the word "transgender" or "trans," people have some kind of concept of what I might be talking about as opposed to a few years ago. Or if I talk about slut shaming, it's a concept that more and more people have heard about. I think in a lot of ways in society, at least in the United States, we're on that good path towards becoming more inclusive.

If there's one central thread running through the questions you've been asked, what would it be?

FR: We all have secrets and we're so close to revealing so many of them, but we don't because of risk. In the park, I get to hear that whole story. I'm the person sitting in the confessional. We have to tell the secrets because secrets grow up to be big lies. If not to your girlfriend, you have to admit it to yourself.

Your website states that everyone should be entitled to a healthy, fulfilling sex life regardless of their socioeconomic reality. How does class affect people's sex lives?

FR: A lot of people unfortunately believe that sexual health and sexual education is a privilege, but sexual education and access to it is a right — it's something we have to have. For people who don't have a lot resources, the access to that information is just as important, if not more. Then there's the digital divide; with someone who is homeless, they can't just go online. They can't just go to the library, because sexuality content is going to be blocked.

I've had a lot of people tell me for years now that I should charge some amount of money, but I absolutely have not done that and will not do that. Free Sex Advice is my way of saying, "I don't care about what your reality is, you deserve this information. Yes, I will sit here and yes, there's no time limit.'"