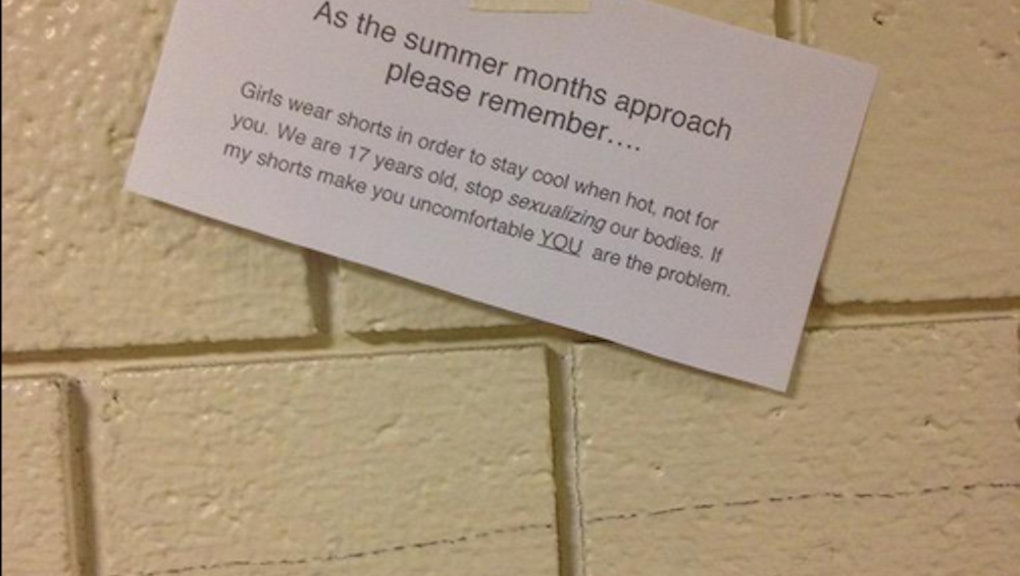 Sexist dress codes at schools across the country are a prime example of the way society constantly polices women's bodies. But one teen decided to push back, not just by complaining about the inequitable situation, but by dropping some feminist knowledge in the hallways.

A student at an unknown prep school uploaded a note that was posted around campus to Reddit three days ago. "As the summer months approach, please remember," the slip of paper reads. "Girls wear shorts in order to stay cool when hot, not for you. We are 17 years old; stop sexualizing our bodies. If my shorts make you uncomfortable, you are the problem."

What needs to change? This anonymous teen is hardly the first to push back on dress codes and their gendered double standard. For years, students have launched petitions, written blog posts and formed groups, like #IamMoreThanADistraction, a group of South Orange, New Jersey, middle schoolers who protested their school's dress code in 2013.

"When the school board is telling a girl that she has to dress a way so she won't be distracting, that's telling a girl she needs to change herself," one member of the group told the Nation. "We are more than distractions to boys and the school environment."

In addition to the double standard, many have noted that dress codes are both evidence of and a tool to perpetuate a rape culture rooted in slut-shaming. Girls are often advised to monitor their clothing in the same way women are told to do everything in their power to prevent sexual assault, rather than prescribe any type of preventive behavior to their male counterparts. As Eliana Dockterman writes in a Time piece on the topic, "We tell women to cover themselves from the male gaze, but we neglect to tell the boys to look at something else."

This student's focus on the inequity of the policy and the sexualization it perpetuates is crucial. To fully address rape culture, we must call out all of its manifestations — including the ones that persist even in seemingly superficial ways, like the clothes we wear.