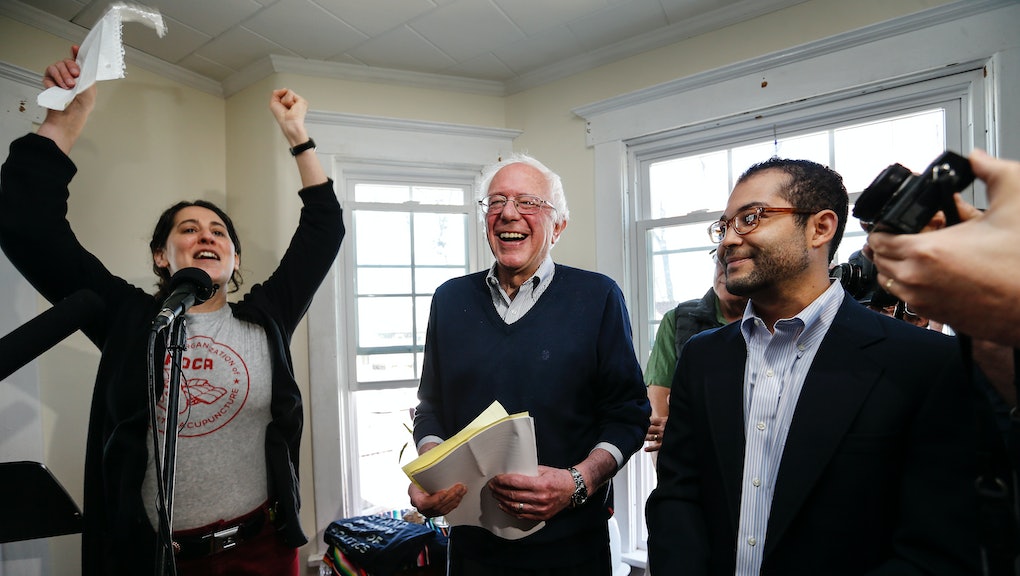 Your 2016 Democratic presidential primary in a nutshell: At about the same time Hillary Clinton revealed Wednesday she would begin raising unlimited money for a super PAC supporting her bid, an aide to Sen. Bernie Sanders told the Huffington Post the Vermont independent's campaign had taken in $3 million over four days — at an average of $43 per donation, from an estimated 75,000 supporters.

The same adviser reported that 99.4% of the contributions were for $250 or less. Furthermore, the Huffington Post reported, Sanders' campaign website has collected 185,000 email addresses, an indication his grassroots donor base could grow throughout the primary season.

Getting the band back together: If the interest is there — and these early numbers suggest Sanders is rooted in fertile political ground — the campaign will be in a good place to capitalize on it. The Associated Press reported Wednesday that Sanders had signed up veterans of President Barack Obama's groundbreaking 2008 digital operation. Revolution Messaging, headed up by Obama alumnus Scott Goodstein, will manage the campaign's online networking and fundraising work.

Sanders will need his initial wave of small donors to keep their pocketbooks open and credit cards out, because there is no cavalry of billionaire boosters ready to ride in behind them. Asked last week if he would accept and promote a friendly super PAC — like the rest of the candidates in the 2016 field, Republican and Democrat — Sanders told CNN's Wolf Blitzer he would not, describing the practice as "vulgar."

"The real question," he said, "is can any candidate in this country who represents working families, who is not a billionaire, who is not beholden to big corporations — in this day and age, can that candidate win an election?"

So you're saying there's a chance: It's a long shot, but Sanders has reason to believe. A poll Wednesday out of New Hampshire showed Clinton with a narrowing majority — just 51% — with Sanders' support among Democrats rising to 13%, up from 6% in February. One in 5 surveyed said they backed Sen. Elizabeth Warren (Mass.), who has said repeatedly she will not run in 2016. If those potential voters were to shift their allegiance to Sanders, the candidate most closely aligned with Warren's politics, he would be up to 33% in the Granite State.

"The campaign will bring together millions of Americans who are sick and tired of the economic and political status quo and want fundamental change in how we do economics and politics in this country," top Sanders adviser Tad Devine told the Associated Press this week.

If the opening days of that campaign is any indication, he might be on to something.