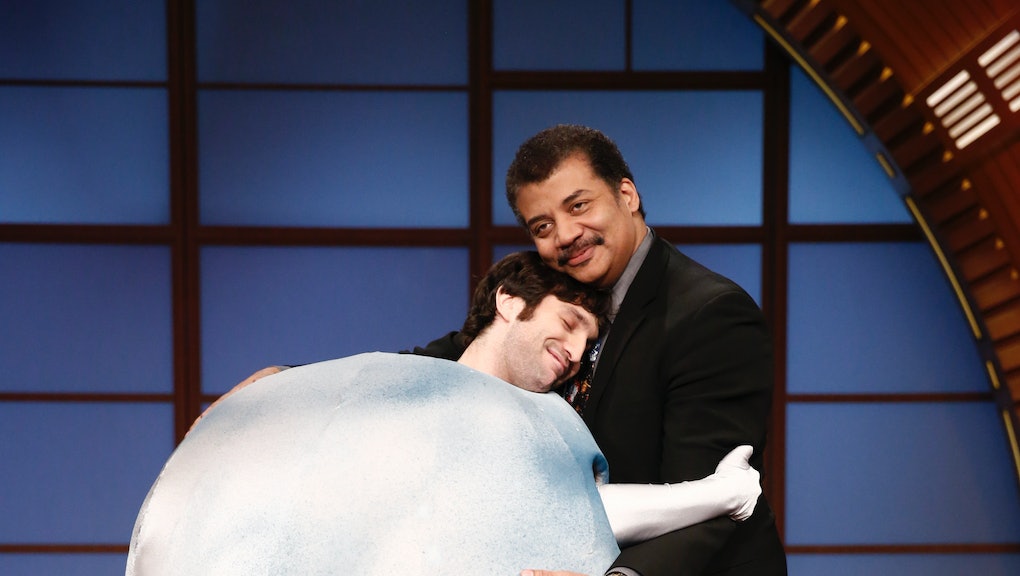 As host of the PBS series NOVA ScienceNow, Cosmos: A Spacetime Odyssey and both the radio show and televised versions of StarTalk, Neil deGrasse Tyson is arguably today's best-known astrophysicist, the person most influential in bringing science to mainstream culture.

He's the director of the Hayden Planetarium at the Rose Center for Earth and Space in New York. Naturally, he's also a compelling speaker — and when kids are in the crowd, he's a role model for young, aspiring scientists.

He regularly tells parents to get out of the way when their kids want to learn and experiment with the world. And when those young could-be scientists want to ask him questions, he goes above and beyond to help.

1. On succeeding in science with a learning disability

When an 8-year-old girl named Lois asked Tyson whether anyone is his field has dyslexia, he used the opportunity to talk about the cadre of brilliant colleagues who suffer from any number of social hurdles, and how they don't let it affect them.

"In my field," Tyson joked, "there are people who have all kinds of issues."

2. On the meaning of life

When Jack, age 6 "and three quarters," asked Tyson about the meaning of life, he could have responded with a silly answer or made a Hitchhiker's Guide to the Galaxy reference and just said "42." He didn't.

"Maybe meaning of life is something you create, you manufacture for yourself and for others," Tyson said. "And so when I think of meaning in life, I ask, 'Have I learned something today that I didn't know yesterday?' Bringing me a little closer to knowing all that can be known in the universe."

A 9-year-old named Jacob became a hero to a gym full of people after dropping "non-Newtonian solid" in a conversation with Tyson. The topic: how to prevent collision with Earth-bound asteroids. And after debating the magnitude of a job like pushing all danger-zone asteroids into the sun (and telling the audience to go home because he's now just having a conversation about asteroids with a 9-year-old), Tyson tells Jacob how to become the first trillionaire.

"Figure out a way to mine asteroids," he says. "They have ingredients that are rare on Earth but common on asteroids. Platinum, gold, iridium — all these elements that we need in our manufacturing world."

4. On how first-graders can help Earth

When delivering a lecture in Worcester, Massachusetts, Tyson encountered a first-grade girl wearing an Einstein shirt and pigtails who wanted to know what her school class could do for the planet.

And instead of phoning it in and telling her to recycle or something, Tyson told her to be curious — and to bang pots and pans. "You're just being a kid and you like to explore things," he says. "Your parents don't like it because it gets the pots and pans dirty and because it's noisy, but for you it's fun and you're doing experiments. ... Just tell your parents that they're experiments and you want to become a scientist, and they won't stop you from doing anything you want."

5. On what would happen without NASA

Kid astronaut James, decked out in his own flight suit for Tyson's lecture in Bridgetown, Barbados, wanted to know what a country without a space program would look like. He asked, "If NASA wasn't created, what would happen to our universe?" Tyson gave him a perfect answer — not just for a 9-year-old, but for voters in a country that's considering cutting funding from NASA.

When Tyson talks to kids, he doesn't dumb it down or skip over real issues. Often, kids are asking questions his colleagues are wrestling with. So when 7-year-old Clayton asked about a black hole's ability to "suck up" other black holes, Tyson dove right in.

"There's a path you can take around two moving black holes that haven't quite collided yet, where you can end up in the past of when you started that journey," he said. "So it's backwards time travel. ... They will eat each other and make a black hole that's twice as large as the one they started with."

7. On what you should bring to a desert island

An 8-year-old boy first had to confirm that Tyson worked at the Hayden Planetarium. Once that was settled, he told Tyson all about the red dwarf star he discovered and how he found it with his own telescope. Tyson crossed his legs and sat on the floor in front of the junior astrophysicist, ready to geek out.

He talked about how adults always ask each other what they'd bring to a desert island, and said, "Everyone should have a telescope, so that there's no part of the universe that's outside of your arm's reach. You can always look up."

Tyson's message for children isn't meant for kids at all. It's a plea for adults to stop preventing kids from being kids.