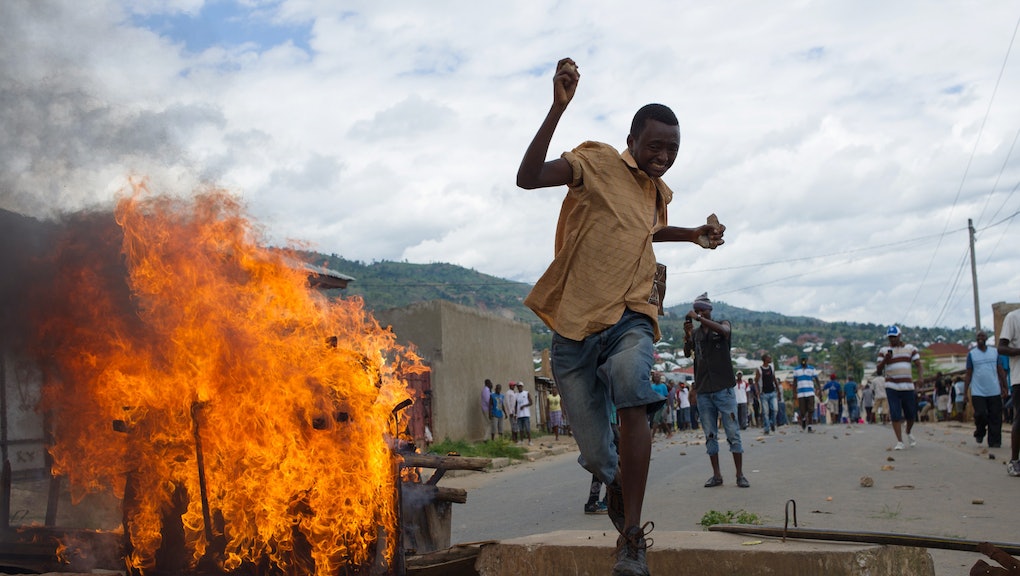 Violent protests have broken out in the small, landlocked country of Burundi since President Pierre Nkurunziza's April 25 announcement he will seek a third term, after a constitutional court ruled, irrespective of existing term limits, he was legally able to run for reelection.

Almost daily riots in the capital, Bujumbura, have killed 17 people thus far, the Guardian reports. A youth member of the ruling party was burnt alive on Thursday, becoming yet another victim in the country's descent into chaos.

Under Burundi's current constitution, presidents are permitted a maximum of two five-year terms, but the constitutional court argued Nkurunziza's first term does not count because he was technically elected by lawyers as part of the peace deal at the end of the country's 13-year civil war in 2005, the Wall Street Journal reports. However, the BBC said the ruling came out after the court's vice president, Sylvere Nimpagaritse, fled the country, stating he and other judges faced intimidation from Nkurunziza and his top aides.

"Other than the Burundi court, all interpretation that we get about the constitution is that ... there shouldn't be a third term," AU commission chief Nkosazana Dlamini-Zuma told Chinese news outlet CCTV, the BBC reports.

The United States and the African Union are urging the Nkurunziza not to seek reelection, as it may reignite the ethnic conflict which fueled the civil war.

"We are deeply concerned about President Pierre Nkurunziza's decision, which flies directly in the face of the constitution of this country," U.S. Secretary of State John Kerry said in Kenya on Monday. "It is my understanding that an Africa Union delegation will go there soon to meet with him to try to underscore the importance ... of the constitution of the country."

Neighboring Rwanda's 1994 genocide was incited by the same ethnic conflict, between the Tutsis and Hutu, so there are fears Burundi's unrest could have wider, regional implications. Reuters reports approximately 40,000 Burundians have already already fled to Tanzania, Rwanda and the Democratic Republic of the Congo. Unusually, Nkurunziza is a mix of the two rival ethnicities, with a Tutsi mother and Hutu father, but he was formally a Hutu rebel, mitigating any chance he had of unifying through representing both sides.

These distressing photos show the disorder that has swept across the streets of the capital, spasmodically erupting into violence.

The world waits to see whether or not Nkurunziza will relinquish his power for the good of his nation and the region. If history is anything to go by, though, there isn't a great deal of optimism to be found in this tragic situation.