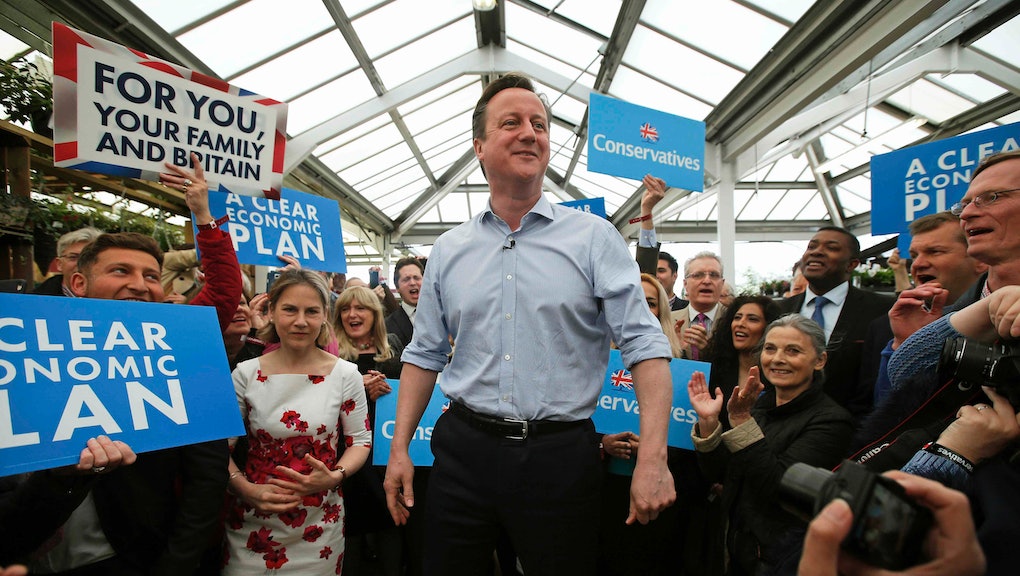 After the UK Elections, the Country Now Looks a Lot Like Maggie Simpson

On Thursday, millions of Britons headed to the polls and voted to keep Prime Minister David Cameron and the Conservative party in power for another term.

The BBC reports that the Conservatives have won 331 of the 650 seats in Parliament, exceeding the requisite 323 seats for an outright majority.

After a map began to circulate using the official party colors to show the distribution of respective victories (Scottish National Party in yellow, Labour in red and Conservative in Blue), many on Twitter didn't lose the opportunity to point out the country's new resemblance to beloved cartoon baby Maggie Simpson of The Simpsons.

Before Thursday, the government had been a center-right coalition between the Conservative and Liberal Democrat Parties since 2010, with a Conservative prime minister, David Cameron. While election results show power between the parties has shifted, one thing will remain the same: Cameron.

Ed Miliband and Nick Clegg have both resigned as leaders of Labour and Liberal Democrats respectively after their parties' poor performance in the elections.

A new "third" party. Over the past 100 years or so, the Conservative Party on the right and Labour on the left have dominated the U.K.'s multi-party system, with the centrist Liberal Democrats usually following in third. This election, though, has seen a startling rise of another party: the Scottish National Party, which seeks greater autonomy for Scotland and has emerged as the third largest party, sweeping almost all the seats in Scotland (56 out of the total 59).

What does this mean for America? Given Conservatives will form the ruling government, policies probably won't change all that much from the path they've been on since the last general election five years ago.

For many years, the U.S. and U.K. have shared a strong alliance that provides America some bargaining power in the European Union, which also happens to be America's largest trading partner. However, Cameron's Conservatives have previously considered a withdrawal from the EU, even promising back in 2013 an "in/out" referendum to be held in 2017 if they won an outright majority in Thursday's election.

It remains to be seen if the two countries' relationship will be changed at all, but the big question is how much this will change the future of the UK. However, given the results of Thursday's election, that might not be very much.