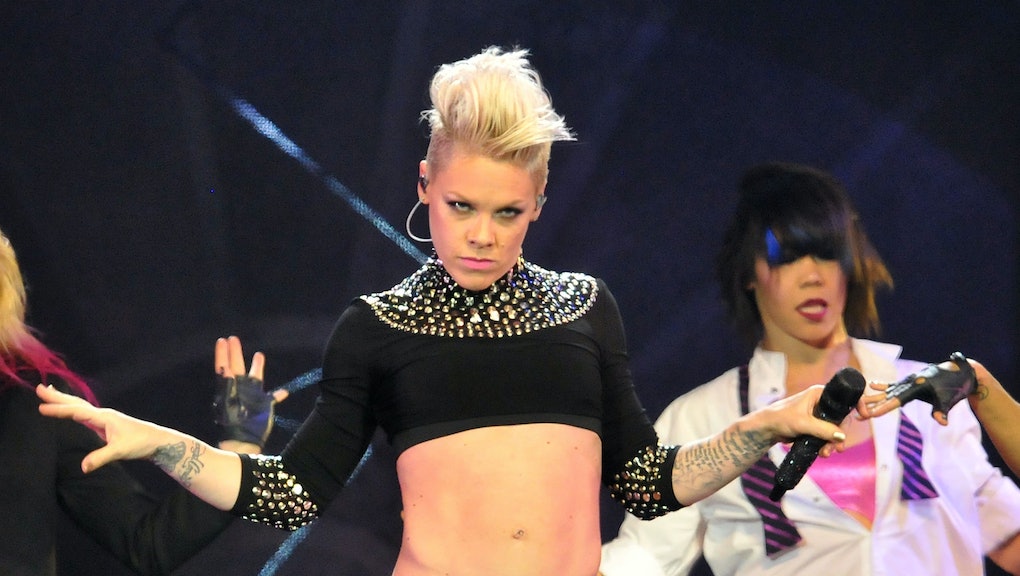 In mid-April, pop queen Pink came under fire. A handful of body-shamers called her fat after seeing photos of her at a benefit for cancer research; those haters learned the hard way that they were messing with the wrong woman. The trapeze-swinging live performer — who has a fabulous body — replied to the awful trolls by taking the high road.

"While I admit that the dress didn't photograph as well as it did in my kitchen, I will also admit that I felt very pretty," Pink wrote in a note she posted to Twitter. "My healthy, voluptuous and crazy strong body is having some much deserved time off."

The singer has a reputation for being outspoken and defending herself when haters deem it appropriate to comment on her life. She's also one of the most confident and outspoken women in music, a model for women in an industry filled with sexism. Here are seven times when Pink, in all her glorious wisdom, awesomely shut down critics.

1. On when people think she's butch

"Well, I was always considered butch. Feeling beautiful to me is when I feel good in my leather pants and my husband grabs my ass. Or when I'm sitting on a mat and my daughter runs to me with complete joy. Beautiful has never been my goal. Joy is my goal — to feel healthy and strong and powerful and useful and engaged and intelligent and in love. It's about joy. And there's such joy now."

Pink has always had a tomboy edge, but that's part of what makes her unique. In an interview with the Advocate, the singer said that a big part of her fan base is lesbian and that she fully embraces her masculine edge. "And we can be androgynous and be butch and be muscular and be one of the guys but also be feminine and beautiful and do all this crazy shit and talk shit," she said. "It's awesome."

2. On having a healthy relationship

"Long-term relationships are an everyday choice. It's harder to be in a marriage than it is to bounce from one relationship to the next. We're good because we communicate and we've grown up together, not because we don't fight."

For Pink and her husband Carey Hart, the relationship hasn't always been smooth sailing. The couple separated briefly before marrying and having their first child together, but Pink says that their struggles have made them stronger. "I'm in a relationship that I've been in for 10 years and it's never going to be perfect," Pink told Billboard. "Carey always jokes, 'You're always just mad enough at me to write a song.'"

3. On people criticizing her appearance

"A girl like me is someone who doesn't rest on her looks, who has had people tell me from day one, 'You're never going to get magazine covers because you're not pretty enough.' I'm totally comfortable with that. I know my strong points: I work hard, I have talent, I'm funny and I'm a good person."

Despite the obvious fact that Pink is freaking beautiful, she's still gotten flak for her looks. The way she dealt with people telling her she would never cover a magazine? Working her ass off and believing in herself until she made it.

"Instead of thinking, 'Am I skinny?' I grew up thinking, 'Am I fast enough? How can I use my body?'" Pink told Who magazine. It's so refreshing to hear a woman in the spotlight encourage fans to find strength from within.

4. On having faith in her path

"I got kicked out [of gymnastics] when I was 12. I was an ass. I was really competitive. I wouldn't clap if I didn't win first place. The actual remark was 'non-team-like attitude.' I was like, 'F**k you, I'm out of here, I'm going to be a rock star instead.'"

Even back when she was a kid, Pink was a troublemaker. "My teachers hated me because I was curious ... [but] I was also confrontational," she told Redbook. "I had a chip on my shoulder. I was really smart and I was really hurting." Instead of taking others' opinions to heart, Pink took that rebellious attitude and used it to her advantage.

5. On throwing industry caution to the wind

When Pink wanted to take her music in a new direction in the early 2000s, she says her label president, L.A. Reid, was not totally supportive (though the two differ in the accounts). "I was trying to be a voice of caution," Reid told the Los Angeles Times. But Pink recalled, "He said I was abandoning my fans and that was a mistake. He felt that if the music isn't broken, don't fix it. He said: 'You're a new artist. You can't do this.'"

But Pink did it anyway, and the result was her breakthrough album, Missundazstood. Pink was credited with changing the pop landscape for the better thanks to her pushing for a bold new direction.

6. On having a troubled youth

"I was like a club kid. I was a little candy raver, and I am the kind of person that sucks the marrow out of the bones of life. Those days were really crazy and lots of all-nighters. And with a bunch of other kids that were trying to find themselves and have a good time doing it."

Pink has been very forthcoming about her wild past: By 13, she was partying and using drugs heavily. But in a revealing interview for Entertainment Weekly, Pink said that she was an addict with a drug problem. In 1995, she had a near-fatal overdose and changed her ways; she never touched drugs again. In 2012 she used her past for good when she starred in a movie about addiction, Thanks for Sharing.

7. On taking power back from men

"It's my very unsophisticated way of taking the power back. I've always had an issue with [the idea that]: "OK, we've both decided to do this. Why am I a slut and you're the player? You didn't get anything from me that I didn't get from you."

Pink's song "Slut Like You" came under fire from some in the media. She agrees with a feminist stance that the word "slut" should be reclaimed, much in the same way rappers reclaimed the n-word. Whether you agree with her or not, you've got to give it to the singer for continuously standing up for her right to use the word. One of Pink's biggest causes has been encouraging women to reclaim their sexuality.