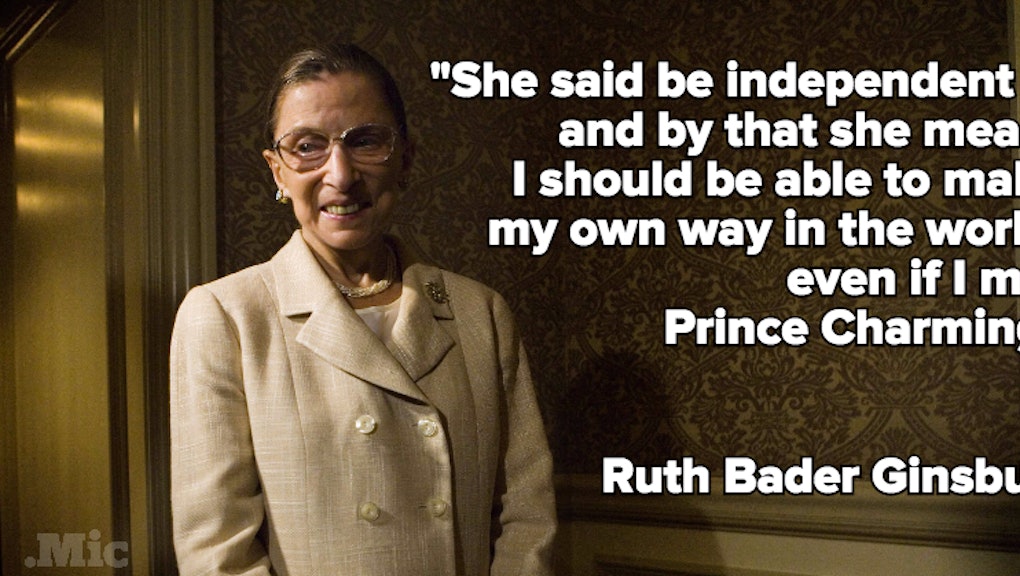 6 Famous Women Speak Out About the Power of Great Mothers

The annual attempt to calculate the value of unpaid work mothers do has lately ranged from around $74,000 to $115,000. But Glamour magazine has their own thoughts on the matter: According to them, mothers — especially their influence on their children — are priceless.

"Behind every powerful woman is a powerful mother," Glamour's Mother's Day video states. While not every woman has a mother or has a great relationship with her mother, these accomplished women in the realms of politics, nonprofits and the arts describe how their mothers prepared them for and shaped their success.

"Although she died when I was 17, she indelibly impressed on me the importance of two things," the Supreme Court justice told Glamour. "One she said be independent — and by that she meant I should be able to make my own way in the world, even if I met Prince Charming. The other, as she put it, was 'be a lady,' and by that she meant don't react in anger, don't waste time on emotions like jealousy, remorse. Those lessons I learned from my mother and they have influenced my approach to life."

Ginsburg has spoken about her mother's influence before, when she told the ACLU: "The study of law was unusual for women of my generation. For most girls in the '40s, the most important degree was not your B.A., but your M.R.S."

Thanks to Celia Bader's support of her daughter, the world is now blessed with the Notorious R.B.G.

"I've said loving transgender people is revolutionary, but I think loving women — really loving women, is revolutionary too, in a social context that is deeply misogynistic, deeply does not celebrate women," Cox told Elle in June 2014. And it's clear this value extends to her own mother.

We're all familiar with Clinton's mom, Democratic presidential hopeful Hillary Clinton. But while the media often focuses on the power of both of these women, it often overlooks that they compose a loving family too.

"My mother and my grandmother were and remain my role models," Clinton told Glamour. "My grandmother passed away a few years ago and I miss her every day and wish that our child would have had the same opportunity that I had to know and love my grandmother."

The journalist is no stranger to struggle — her tenacity came evident when she survived breast cancer and myelodysplastic syndrome, a rare blood and bone marrow disease. But Roberts had a powerful mother from whom she drew strength.

"I have a lot of mommy-isms," she told Glamour. "One of the best ones, 'Make your mess your message.' And she said 'There are no strangers, just people I haven't met yet.' I think that's really something that was very helpful too, that I'm comfortable around people from all walks of life."

It's hard to imagine that one of the most celebrated modern photographers didn't always intend to pursue the craft. But had her mother not influenced her, Leibovitz may have forgone her storied career.

"I certainly didn't think that I was going to be a photographer when I was a young person," Leibovitz said. "I was raised in a family and had a very strong mother who believed in art, music, you know, books. I was lucky, she was a modern dancer — very connected to Martha Graham and hat was sort of instilled in a sort of coocoo way — very, very important."

There's no doubt Gomez is a powerhouse entertainer, but she credits her mother and her family for helping her achieve great success.

"My mom keeps me grounded, that's for sure," she said. "She's a very, very strong woman and she's been through a lot in her life. And it's just my family that is my core — they're the ones that have raised me and taught me everything I know. And they never really let me forget who I was."