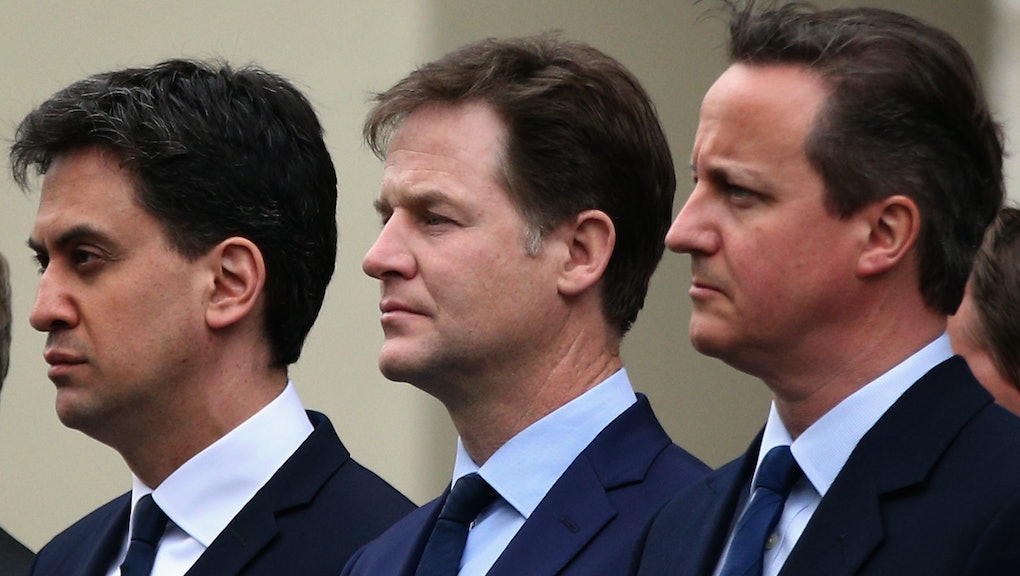 The U.S. Could Learn a Lot From How the U.K. Runs Its Elections

The results from the United Kingdom's national election on Thursday have stunned the world. In defiance of polling trends and expert estimates, the Conservative Party won a majority of seats in Parliament, and their leader David Cameron is set to take another five-year term as prime minister.

The remarkable performance of the separatist Scottish National Party at the polls also has Washington worried: The U.K. now faces greater prospects of Scottish independence, which could diminish the vital ally's international stature.

But Americans reflecting on the U.K.'s election should also be reminded to worry a bit more about themselves — when it comes to time and money spent on campaigns, the U.K.'s frugality makes the U.S. election system look beyond comprehension.

British elections are short and cheap: Many complaints can be levied against British politics, but when measured by the amount of time spent running the campaign circus, they're far more civilized than in their former colony.

As Philip Bump notes over at the Washington Post, the entirety of the British election process is shorter than the time between Election Day and inauguration in the States. The full-fledged campaign season in the U.K. is a matter of months, while in the U.S. it's the better part of two years. Bump has a striking chart to put it all in perspective:

Brief campaigns not only have the advantage of subjecting the citizenry to less vacuous analysis about personality and strategy, they also match spirit of the U.K.'s strict spending caps on campaigns. Across the pond, each party is limited to spending less than $30 million in the year before an election.

As the New York Times reports, in 2010, "the Conservatives actually spent about $25 million, and Labour less than half that." To put that in perspective, in 2012, as the New York Times notes, presidential candidates in the U.S. spent roughly the same amount of money on expenses related to raising money. Both Barack Obama and Mitt Romney eventually totaled more than $1 billion each in their bids for the presidency.

To the excitement of many, Hillary Clinton has taken up the cause of finance reform — she has suggested a constitutional amendment designed to limit the influence of money on politics. But in order to take a shot at that goal in the White House, it may cost her up to $1.7 billion to get there.