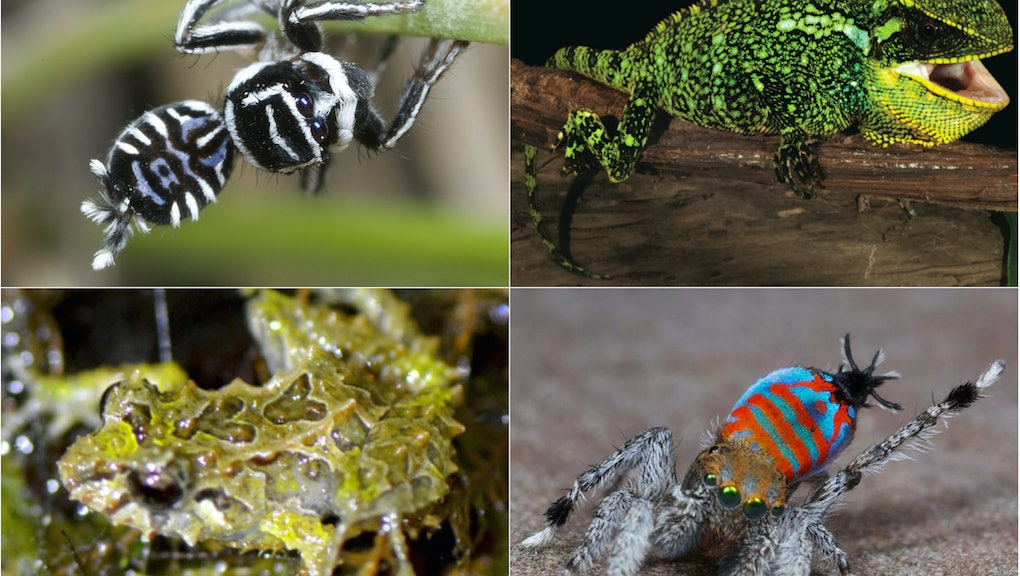 8 Wild Creatures We Never Knew Existed — Before This Year

Earlier this month, the Internet freaked out when a new species of frog was discovered that looked just like Kermit.

This discovery proves that even in 2015, there's still a lot of mystery left in the world. We discover 15,000 to 20,000 new species every year. Many are small invertebrates or insects, but others are new species of frogs or lizards, found deep in the cloud-soaked rainforests of the equator or down in the heat of Australia. "Kermit" was only the most famous of them. Kermit (actually Hyalinobatrachium dianae) was discovered in Costa Rica and is pictured above.

But that's far from all we've seen, even if it's the one most people know.

"It's a thrill that's hard to describe to someone else," Quentin Wheeler, the founding director of the International Institute for Species Exploration, told Mic. "That moment you realize you've discovered a species that no one has ever recognized before." Wheeler, at 61, has discovered more than 100 new species himself, with a specialty in beetles.

This year alone, there have been a number of amazing creatures that we realized were different from any animal previously known, proving there's still a lot of wild in the world.

Here are seven of the other most notable ones:

Discovered in the mountains of Ecuador, this tiny frog (about the size of your fingernail) changes its skin texture in minutes to blend into the environment and protect itself from enemies. It was given the name Pristimantis mutabilis, or the mutable rain frog, by researchers in a March article published in the Zoological Journal of the Linnean Society.

In April, we identified three new species of lizards that live deep in the tropical Andes, described as miniature dragons. Meet Enyalioides altotambo:

Much of their habitat, stretching across parts of Peru and Ecuador, is known for being blanketed in fog and mist. This one is Enyalioides sophiarothschildae:

Last, but not least, is Enyaloioides anisolepis. An adult male is pictured below.

The next two might be the greatest additions so far this year (that is, unless you have arachnophobia). They were identified in a paper published in January as new species of peacock spiders. All photos courtesy of Jurgen Otto.

Below is Maratus jactatus, nicknamed Sparklemuffin, showing researchers do indeed have a sense of humor. This species was found in Queensland, Australia, and is smaller than a fingernail.

The other species of spider is Maratus sceletus, aka Skeletorus, also discovered in Australia.

Below is a female Sparklemuffin with a baby. It's not as ornate as the male because in this spider society, at least, it appears it's the men that have to dress to impress.

Also in 2015, for the first time in 150 years, we identified a new species of seadragon, the Phyllopteryx dewysea.

Found in Western Australia, these seadragons are genetically distinct (7% to 13% of their genetic material is different from other seadragons), with ruby coloring. They spend most of their time 150 to 210 feet below the ocean's surface.

There is still so much about this world we don't know. Every living thing on this planet isn't just valuable for what it is, but also for its part in the much larger story of who we are and how we came to be. If and sadly when any species go extinct, we erase part of the history of life on earth.

"When they go extinct, that's it," Wheeler told Mic. "It's incredibly urgent and important to conserve as many of them as we can."