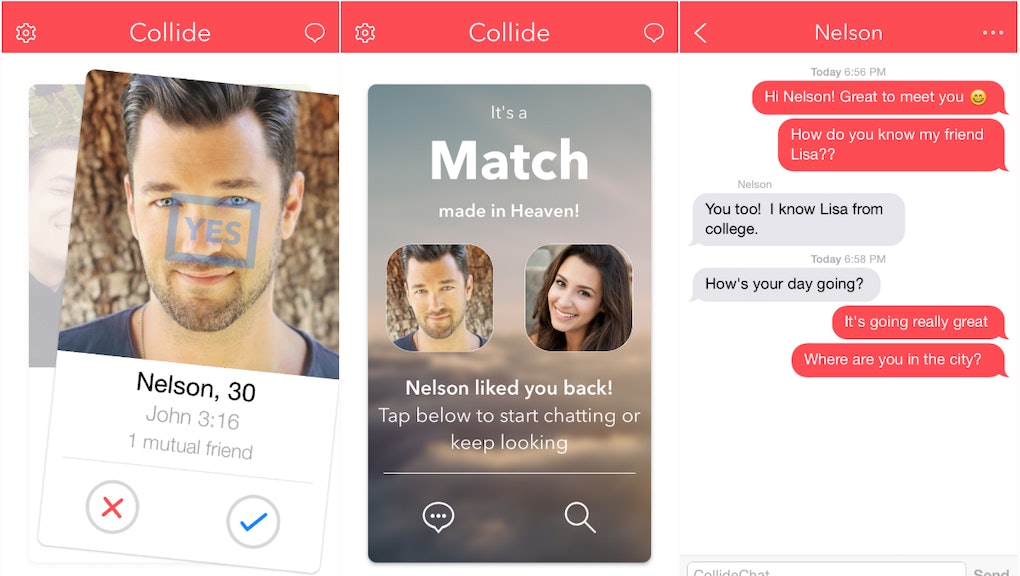 This week brought a news update that many could have predicted: Young Americans are less religious than ever, as about 35% of adult millennials identify as religious "nones," according to the Pew Research Center.

What does that mean for the dating scene? For religious millennials, it means they're an increasingly rare breed, making dating in the mainstream a challenging balancing act.

Collide is the latest dating app trying to help strike that balance, in this case for Christians. The app, which launched in April with the tagline "Christian Dating. Reimagined" and a sleek dove logo, is marketing itself as a "Christian Tinder," with swiping and photo-heavy profiles plus a few bonuses: the person's denominational affiliation, their favorite Bible verse, how often they go to church.

The intent behind the app is admirable. As a shallow carbon copy of Tinder, however, the app falls short in meeting the real-life dating needs of religious young people.

What Christian dating needs (and doesn't): The words "Christian dating" might evoke a buttoned-up image, but the truth is many young Christians want something more progressive.

For some, that means simply using the secular options out there. "As a millennial Christian, if I'm going to use a dating app, I'm going to use an established one, like Tinder or OKCupid, which already provide all of the distinctions I need when looking for a partner with similar faith and values," Brandan Robertson, director of The Revangelical Movement, told Mic.

But there are those who want something that narrows the dating pool to Christians.

"Initially l thought Collide could be an answered prayer for millennial Christians who are either sick of Tinder, like me, or are afraid to use Tinder, Grindr or other dating apps out of fear of being labeled as someone who doesn't take God or their faith seriously," Melissa, a 26-year-old evangelical Christian, told Mic.

Indeed, Collide co-founder Nelson Wang told Mic that Collide sees young Christians as a "niche community" with specific needs. "We believe that having the same religious background creates a strong level of comfort and could potentially help to create deeper connections for people," Wang said.

Missing the religious mark: The issue? Collide is about as deep as a kindergartner's version of the Christmas story, critics say.

"Collide is no different than Tinder except that it asks for your denomination, favorite Bible verse and has thousands less people," Robertson said. If a product is going to establish itself as a religious alternative to a secular product, the thinking goes, it should offer spiritual or practical benefits, beyond feeling exclusionary.

What Collide does offer isn't too useful. "Why would I pick a match based upon their favorite Bible verse?" said Melissa. Laura Turner of the Religion News Service concurred, adding, "Entering your favorite Bible verse as the one identifying factor that shows up on your profile — besides your picture — seems like exactly the kind of thing a non-Christian would think a Christian would do."

That might be because the founders of Collide aren't Christian, as Turner found out: "Between the three of them, one is agnostic, one is not religious and one believes 'in God but doesn't follow a specific religion.'"

Getting faith right: There is a market for religious dating apps, but the success of those apps may underscore how helpful it is for creators to have roots in their religious community.

Ishqr, a young Muslim app, is geared towards marriage-minded users, based on found Humaira Mubeen's research into Muslim singles' needs. JSwipe, the so-called Jewish Tinder created by David Yarus, has religious-minded features that aren't superficial, but nuanced enough to be beneficial to a Jewish dater without veering into stereotypes — e.g. your denomination, and whether you keep kosher.

The kosher question might sound silly or unsexy, but its practicality is the key. Religious beliefs and observance encompass more than just a Bible verse and a few religious symbols. Religion is lived, and religious millennials are making it work in an increasingly secular world. To really hit the mark, dating apps need to reflect that complexity — all while keeping that all-important ability to "swipe right."